Chapter 4. The Uprising Itself

Map of the Rebel Garrisons

The Rising in the Regions

On Easter Monday, April 24 1916, approximately 1,250 men and women from the Irish Volunteers, Irish Citizen Army and Cumann na mBan­ under the command of James Connolly and Padraig Pearse ­seized key locations in Dublin and proclaimed an Irish Republic. The rebellion – the Easter Rising as it has since become known – ended six days later with an unconditional surrender by Padraig Pearse to British forces on Saturday, April 29, 1916 to avoid further bloodshed in the face of certain defeat.

Click on the dates below for detailed descriptions and maps illustrating what happened on each day of the Rising. Civilians, including the workers, women and children across Dublin, tell a very different story from rebels in the Irish Citizen Army and Cumann na mBan. It was different again for the British soldiers and the police force, who were called to defend the city. 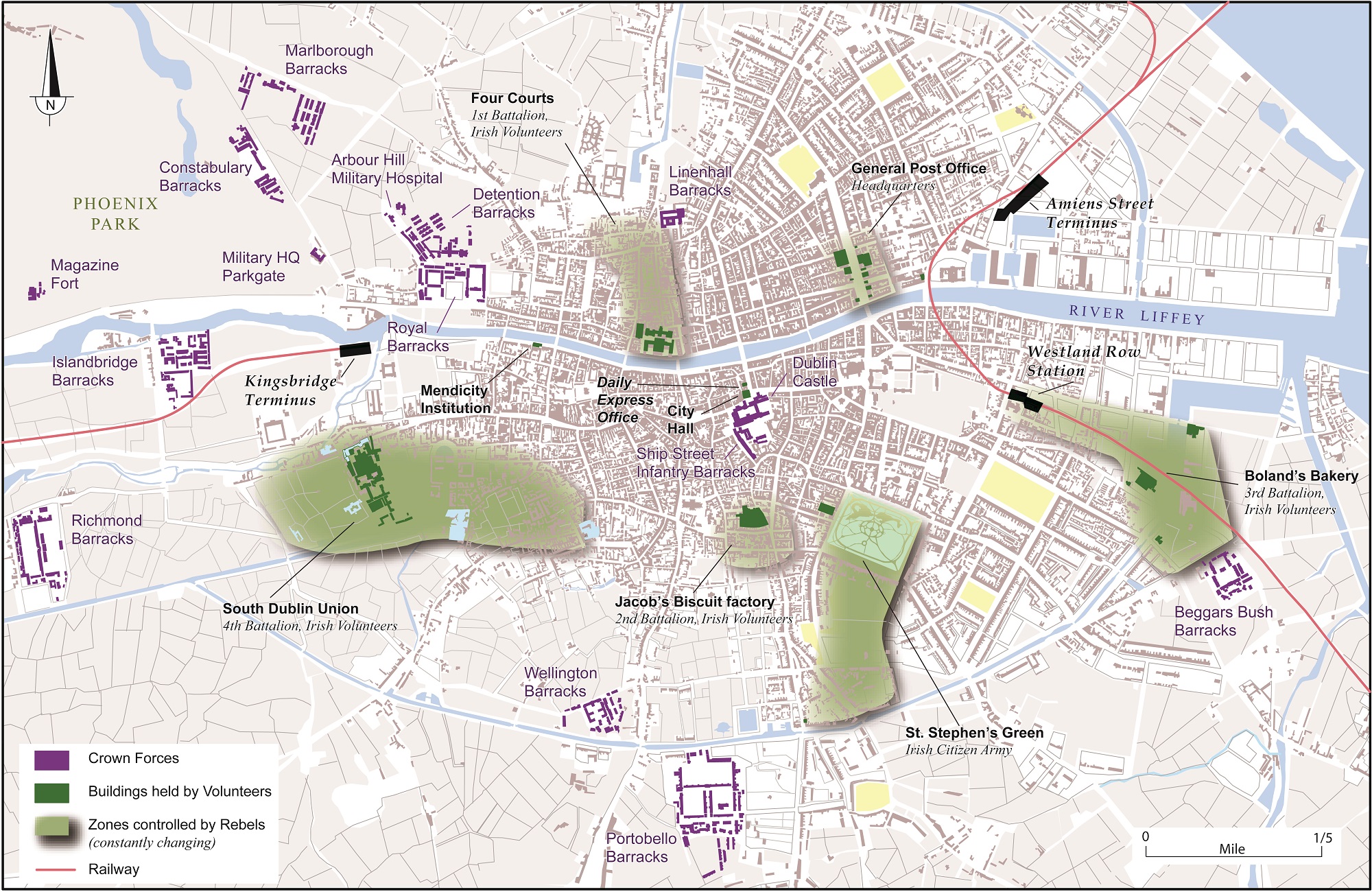 Though the Easter Rising was planned to be a national affair, IRB strategists primarily concentrated on seizing Dublin. They intended to hold the Irish capital as long as possible, in order to grab international attention and inspire future generations of Irish nationalists. The republican military plan ringed the city centre with interconnected strongholds, which could reinforce each other. Positions were selected to contain the numerous British Army barracks in the Dublin suburbs, and control major road and rail approaches into the city centre to be used by military reinforcements.

Irish Volunteers and members of the Irish Citizen Army (ICA) carried food, water, and picks to burrow between buildings. Street barricades would slow advancing troops, and subject them to republican fire from hidden positions in nearby buildings. Though heavily outnumbered and outgunned, the rebels knew the urban terrain, while their officers had months to select strategic firing points and defensive posts.

In terms of dispositions, the Irish Volunteer 3rd Battalion held the area around Boland’s Bakery, threatening Beggar’s Bush Barracks and an advance from Kingstown (Dún Laoghaire), the probable source of troop reinforcements arriving by ship from Britain. The ICA at Stephen’s Green stood astride a major crossroads into the heart of the city, which included a likely approach from Portobello Barracks. Another ICA unit would attack Dublin Castle and divert British troops to that locale, rather than allowing them to concentrate against rebel positions still being fortified. The 2nd Battalion headquartered in Jacob’s Factory could repel British advances from Wellington and Portabello Barracks, and target other reinforcements dispatched to Dublin Castle. The 4th Battalion in the South Dublin Union and surrounding areas covered Richmond and Islandbridge Barracks, as well as Kingsbridge Railway Station, a likely arrival point for military reinforcements. Across the river, 1st Battalion units in the Four Courts and King Street could frustrate approaches from the Royal and Marlborough Barracks; they could also provide the rebels with a possible line of retreat from the city, should the countryside rise up. A garrison with the Provisional Government group occupied the GPO and other strong buildings along Sackville Street. During the fighting, this basic plan allowed the rebels to seize Dublin, despite a low turnout of Volunteers and the presence of thousands of British troops within the wider area.

Significant success was achieved in places like North King Street, South Dublin Union and Mount Street Bridge, where the rebels conducted hit-and-run attacks on advancing British troops, or lured them into hidden pre-planned fields of fire.  However, after a few days of fighting the weight of the British forces ultimately constricted the rebels, and pinned them into isolated positions that were then blasted by vastly superior British firepower. Considering the odds that were stacked against them, their five-day stand was about as much success as the rebel planners could have reasonably hoped for. [Source: Atlas of the Irish Revolution, (CUP, 2017]

Find more maps and documents realting to the 1916 Rising in Unit 5 of the Atlas of the Irish Revolution Resources for Schools.

The Rising in the Regions

Click on the links below to discover what was happening outside Dublin in 1916. First Pubished in the Irish Examiner in 2016.

Cork City before the Rising

Pearse's plans to import guns into the South-west

Roger Casement in Kerry in 1916

A Week of Disorder in Cork

Over 1,000 marched from Cork Villages and Towns

The Rising in Enniscorthy

The Galway Volunteers in 1916

The only Shots Fired in Kerry in 1916

Country House Society in a Year of Conflict