The two Irish boys, John and Ernest Nunan, aged 26 and 19 respectively, who are said to have been arrested in Ireland during the rebellion and interned in Wales under the Defence of the Realm regulations, as “persons of hostile association, reasonably suspected of having promoted or assisted in an armed insurrection,” were taken before Mr Denman at the Marylebone Police Court, on Saturday. They are charged with having absented themselves when called up for permanent service under the Military Service Act, by Captain Moore, of the Marylebone Recruiting Office.

Defendants were described as clerks living in Lisson Grove. This was the first case of the kind, it was said, in which men, interned under an order of the Secretary of State, had been charged as absentees under the Military Service Act. 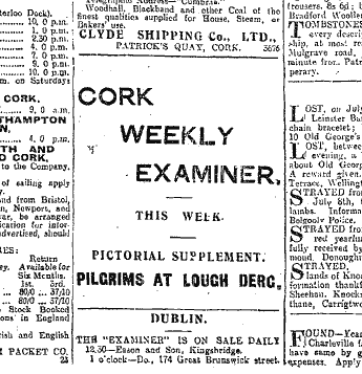 The controversy on Home Rule goes on apace in all the organs that have steadfastly opposed self-government for this country, assisted by the efforts of the nominal Home Rulers, who have all along thwarted at every hand the Irish representatives when they endeavoured to achieve its consummation. They have to their own satisfaction pounded to a jerry any hope of an amicable solution, and they confidently look forward to a prospect which we confess we regard with the greatest apprehension of a distracted and turbulent future for our country.

The Southern Unionists hope to continue to gather in the loaves and fishes of office. The doughty patriots who are at present playing their game, when and if it succeeds, will return to their tents and to the Nationalists will be bequeathed the legacy to fight on their has been their portion for many years in the discouraging and thankless task of striving to make Ireland a Nation.

The competitions began today at 10 o’clock in the Central Model Schools, Marlborough street, the buildings being lent by kind permission of the Commissioners of National Education.

Solo singing in Irish – The judge remarked that the singing was of a much higher standard than it had been for some time. Mr. Eamonn O’Neill said the pronunciation generally was better than in the past few years.

London, Tuesday. The  Court of Criminal Appeal today upheld the conviction of Roger David Casement for high treason, and he was conveyed back to prison during the afternoon still under sentence of death. He will, however, it is understood, make a last effort to get his conviction quashed by appealing to the House of Lords, but this depends upon circumstances.

Those of our readers who have been sending copies for the “Examiner” to the United States and other neutral countries are notified that from the 1st July these papers cannot be sent through the post by individuals. They can only be forwarded through newspaper offices or by newsagents who have received the necessary permit from the War Office. This prohibition does not apply to any part of the United kingdom, the Colonies, including Australia, New Zealand Canada, South Africa, the British possessions, or any of the Allied territories.

Sir- I see a letter on your paper re price of gas in Cork, which is stated to be 4s. 4d. Per 1,000, as compared with 2s. Per 1,000 in Belfast. I find we are still worse in Mallow, where gas is 5s. 9d. Per 1,000, with a special rate of 1s. 4d. For gas “undertaking,” whatever that may mean. It is certainly strange that there should be such a difference. Perhaps someone who knows may oblige by explaining. 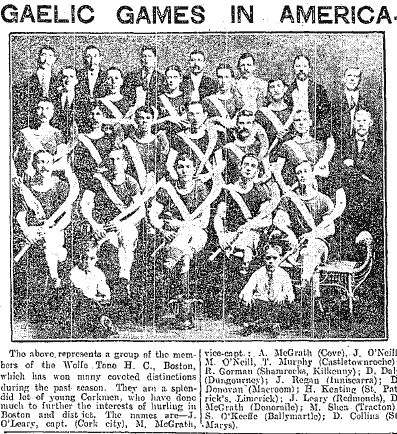 Tralee, Friday. Fourteen of the Kerry prisoners, who had been interned for the past eleven weeks, arrived home to-day from Frongoch Detention Camp, all looking in the pink of condition and feeling in the best of terms, and they brought with them the cheering news that the other interned Kerrymen would be home during the coming week. There was a very large crowd assembled at the entrance to Tralee platform awaiting the arrivals by the one o’clock train. A big force of police attended to prevent any demonstration.