The abuse of the National Party still continues, and probably will continue while Messrs. O’Brien and Healy have tongues to wag, for it is not to be expected that elderly and disappointed politicians will change their tactics and their nature on matters of bad taste, in which, according to their own showing, there assert that each is an expert.

If one turns from such unpleasant topics to what is practical in Irish politics one finds that Mr. Redmond and Mr. Dillon recently interviewed  the Premier at Downing Street, and synchronising with the news published in an English weekly that the prospect of an early general amnesty for the Irish prisoners at Frongoch is to be expected.

The electors of West Cork will probably regard the efforts of Mr. Redmond and Mr. DIllon to secure the release of the Irish prisoners with more favour than the oratorical claptrap to which they have been treated by Messrs. O’Brien and Healy in their campaign to secure the return of a Sinn Fein Parliamentarian to Westminster. The West Cork electors will not have forgotten Mr. Maurice Healy’s historic summing up of Mr. O’Brien, which is worth recalling as it appears to be a fairly accurate character sketch of his leader:

“Every man who agreed with Wm. O’Brien was one of the most glorious Irishmen who ever lived, but every man who differed from him was a blackguard and a miscreant engaged in a foul conspiracy against Ireland.”

It may be left at that. Those critical criticals of the All-for-Ireland Party appear to know each other thoroughly.

Since Mr Wilson’s re-election the newspapers here have been speculating about his well-known desire to bring peace to Europe, and now we have a message from the Washington correspondent of the “New York Evening Post”… The correspondent, in discussing the possible ending of the European war, virtually predicts that President Wilson will be able in a few months, possibly during the winter, to start the machinery of peace going. 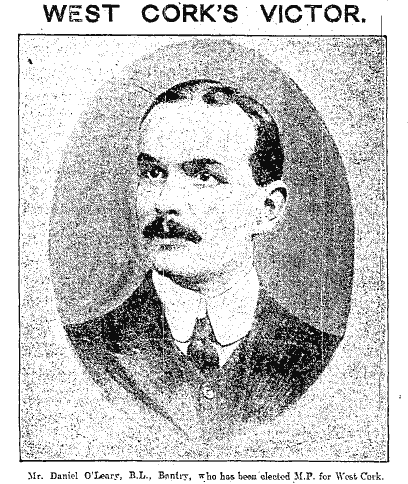 Polling for the West Cork election began at eight o’clock this morning, and proceeded very quietly up to noon…. When everything is said and done, the fact that a man [such as Healy] is native of West Cork is a very strong recommendation… And there were again shown to be practical reasons why the return of Mr. O’Leary would be desirable in the interests of the fishing and other industries of the division. These have certainly weighed with very many voters….

The Educational Company of Ireland (The Talbot Press) have now issued a volume of poems by Thomas MacDonagh, the gifted young Irish writer, who fell during Easter Week in Dublin this year.

The extent of the damage caused by the recent storm and the floods, judging by the reports from Kerry, TIpperary, Waterford, and various parts of the county Cork, has been considerable… The flood of the Lee and the Blackwater was extremely severe, and a good deal of damage was done in the city of Cork and the towns of Fermoy and Mallow also were inundated, while the poor, as is usual in all such visitations, suffered most.