The British Reprisal Strategy and its Impact 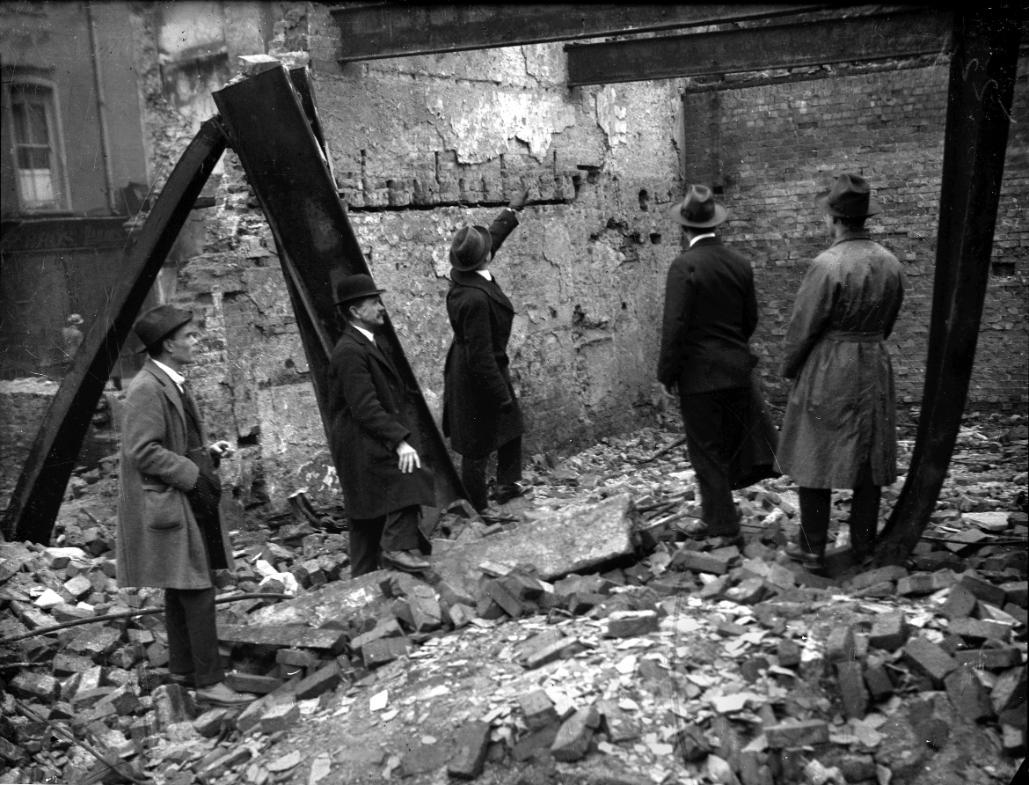 Assessing the damage in the aftermath of the burning of Cork. 12/12/1920 [Source: @Irish Examiner]

From the 1916 Rising when the British Army shelled a large section of valuable property in Dublin’s city centre to terminate the rebellion, down to the end of the War of Independence, the destruction of property by both sides became part of the collateral damage of conflict in Ireland. This military response to the Rising marked a shift in the British governance of Ireland. Four years later, the burning of a large section of Cork’s city centre by the Auxiliary Division, which had been recruited to stiffen and militarise the RIC, also focused on some of the most valuable commercial properties in Munster, dislocating the city centre economy and putting thousands of people out of work. This arson attack on 12 December 1920 was a reprisal for an IRA ambush at Dillon’s Cross, which killed an auxiliary and wounded many more. This was by far the most destructive reprisal of the War of Independence carried out by Crown forces.

Cork had already been hit harder than the rest of the country by arson attacks. Just a week before the , the Irish Independent reported that the toll of destruction on buildings in the city amounted to over £1 million. There had been over twenty fires in the city including a number of business premises, and buildings associated with the republican movement such as the City Hall, the former Sinn Fein Headquarters on Grand Parade, the Sinn Fein Club North East Ward, the Thomas Ash Sinn Fein Clubs, the Pipers Club on Hardwick Street and the ITGWU offices. Police reports for November 1920 attributed this spate of attacks to an ‘Anti-Sinn Fein Society’.

If the scale of the subsequent burning of Cork was quite exceptional, when sixty shops were destroyed including four large department stores, the City Hall and the City Library, it very much followed a pattern of smaller attacks in which Crown Forces responded to IRA attacks with reprisals. In the preceding year, these reprisals had been most commonly carried out by the RIC; the British Army sought distance from such tactics which reflected badly on discipline. But the reprisal tactic in Ireland appears to have had military origins. The first took place in Fermoy, Co Cork in September 1919, following an IRA arms raid which resulted in the fatal shooting of a British soldier. Thirty soldiers ran amok. The town was subjected to an even more destructive outbreak in late June 1920 following the abduction of General Lucas. By mid-1920, military reprisals had occurred in several towns.

Caption: Attacks on property by the Crown forces, September 1919-February 1921, as compiled and listed by the Dáil Éireann Publicity Department. The list is not exhaustive but the general pattern is clear. Munster was the worst hit, accounting for 60% of all attacks on property. Cork had the highest number (70), followed by Tipperary (62), Kerry (49), Limerick (36) and Clare (25). Outside of Munster, the highest rates occurred in Galway (25), followed by Dublin (16), Leitrim (16), Sligo (15), Longford (14) and Westmeath (12). Only one attack is recorded for each of the counties of Derry, Kilkenny, Meath, Laois and Wicklow, while Antrim alone has no incident listed. Over 90 per cent of attacks occurred after July 1920. This coincided with the full deployment of the Black and Tans and Auxiliaries, but they were not solely responsible. The regular RIC and, occasionally, the British Army also played a role in reprisal attacks. Attacks on property peaked in November-December 1920, when 180 such incidents were recorded, climaxing in the ‘burning of Cork’ on 11-12 December 1920. In the first two months of ‘official reprisals’ in January-February 1921, there were seventy-nine recorded attacks. [Sources: The Struggle of the Irish People: address to the Congress of the United States, adopted at the January session of Dáil Éireann, 1921 (Government Printing Office, Washington, 1921), pp. 14–20; Irish Bulletin, vol. 3, no. 20, 28 September 1920; Dáil Éireann Publicity Department, ‘Map Showing Irish Towns and Villages wholly or partly wrecked by English Forces from Sept. 9th, 1919 to March 1st, 1921’, UCD Archives, p. 0150-1336] Atlas of the Irish Revolution (2017)

More destructive still in economic terms was a military reprisal carried out on Mallow on 27-28 September 1920 in the aftermath of the killing of a British soldier in an arms raid on the local barracks. The British Army appears to have orchestrated and sanctioned this, since soldiers were transported from neighbouring towns by lorry, and a number of properties in the town were destroyed, including the Town Hall and Cleeve’s condensed milk factory, which employed up to 300 local people. The destruction that night led to compensation claims amounting to £300,000, half of which was for this factory.

The Essex Regiment ran amok in the town of Bandon in the days and nights following the Toureen ambush on 22 October 1920. They destroyed a number of shops and the Bandon Hosiery Company. Damages to that firm alone were estimated at £50,000. It is clear that a number of units in the British Army, most notably in the Munster area, were responding to IRA killings with reprisals focused largely on the destruction of property.

The first large scale police reprisals occurred in Thurles in January 1920 and Tuam on 20th July 1920. These attacks gathered momentum until the autumn of 1920 when the attack on Balbriggan, (a reprisal for the shooting of a police officer) hit the British newspaper headlines. This was the most notorious of the early reprisals by police on 20-21 September when, in addition to the destruction of housing, an English owned hosiery factory, Deedes Templar and Co was destroyed. It had employed 120 workers directly and 300 out-workers.

The Irish Bulletin, the leading republican propaganda journal, claimed that ninety towns had been attacked by Crown forces between September 1919 and September 1920 alone, many more than once. Forty-two Irish creameries were destroyed by Crown Forces in the summer and autumn of 1920 alone.

‘Scene of an official Black and Tan reprisal, a public house in Templemore, County Tipperary burnt to the ground’. [Photo: NLI, HOGW 113]

So how much property destruction took place in the Irish war of independence? 37,000 claims were made for damages to property by February 1923. The many outstanding claims for compensation for property destruction during the pre-truce period, roughly 19,000, were finally settled by the Compensation (Ireland) Commission which arranged that each side would take on the costs of property destruction carried out by its own forces. The result of this agreement was that the British Treasury ended up paying out the majority of the costs, since the Crown forces were accountable for a greater share of the destruction, a direct consequence of the cumulative impact of the reprisal strategy.

Brigadier General F.P. Crosier has cited a figure of £4 million for damages done in Ireland by Crown forces in 1920-21, with the RIC, he noted, accounting for a significantly larger share than the Army. This is a hefty sum, but to put it in context, the cost of keeping the British Army in Ireland in these years would have been about £10 million and the RIC a little under £3.5 million. This recurring annual cost was a bigger issue at a time of retrenchment in the face of huge wartime debts.

When the strategy of depending on the police had abjectly failed by the end of 1920, the British Army assumed greater responsibility, implementing official reprisals in the more troubled areas, focusing on the destruction of republican households. Under martial law, proclaimed from 10 December 1920 in the more disturbed counties in the south and west, so called ‘official reprisals’ were introduced where property owners were notified when their property was to be destroyed. These notifications were formally printed in the press. The adoption of this modification tellingly reveals the continued belief within the British cabinet in the continued efficacy of reprisals as a response to the republican challenge. About 150 properties were destroy by the British Army in the martial law area between January and June 1921.

Republicans in Cork in particular hit back, so that for every republican cottage destroyed the larger properties of wealthy loyalists, identified as active British supporters, were burnt. Although these republican counter reprisals were only formalised in June 1921, this strategy had been pursued long before in some areas, most notably in Cork. This created pressure on the government from loyalists, adding to the mounting chorus of British public opinion against reprisals. The strategy was finally called off on 3 June 1921, but the damage at this stage had been done.

British newspapers relentlessly focused on documenting reprisals all over Ireland. While the reprisal tactics of the RIC were never acknowledged to have been sanctioned by cabinet, when British journalists reported that reprisals had been authorised. This assertion was never rejected by the government. The coverage of reprisals severely challenged British notions of justice. For a country which claimed to champion the rights of small nations, reprisals smacked of double standards.

Mounting opposition to reprisals, from the British public and from within parliament, presented a challenge which could no longer be ignored. Secondly, significant public debts from the First World War, combined with increased military demands from elsewhere in the Empire, meant that Lloyd George’s coalition government was unwilling to countenance the greater military engagement and expenditure in Ireland which would have been necessary to defeat the IRA. The counterproductive impact of British counter-surgency on British public opinion and its cost, therefore had a decisive influence in determining the final outcome of the conflict.

Original footage on ‘Reprisals by Order’ from British Pathé, taken in Ireland during 1921. Thanks to Landscapes of Revolution for the share, a new project dedicated to the archaeology of Ireland’s War of Independence.