The above illustration shows the Monstrance [Honan College Chapel, University College Cork] which is now completed. It is a beautiful example of modern craftsmanship. …The Monstrance is executed in silver, weighing about 220 ounces, and is heavily gilt. Designed by Professor William A. Scott… the craftwork has been executed by Messrs. Edmond Johnson.

Sir – For some weeks there are swarms of purchasing agents all over the country buying up all the potatoes that they can lay their eyes on, at fancy prices, for exportation, with the inevitable result that potatoes last Saturday in the Cork market were from 1s 10d to 2s a weight. I am informed that if those purchasing agents are allowed to clear the country of potatoes that in a fortnight potatoes will be 2s 6d to 3s a weight- the highest price touched since the black famine of 1846-7…. J.J. Goggin

Last month when the Irish Leader in the House of Commons raised a discussion relative to Ireland and the serious situation that exists in this country owing to the existence of Martial Law and to the absence of constitutional Government, his observations made a deep impression in Parliament and on the country. It was felt that though his motion (which indicted the system of government in Ireland, and alleged that it was inconsistent with the principles for which the Allies are fighting) was defeated, the Coalition could not stand against the logic of Mr. Redmond’s case, and that the Government would mend its hand, while not admitting the error of its ways.

While the return from the Eastern States yesterday evening, and the claims of the Republicans in the Middle West made the election of Mr. Hughes seem so positive – even newspapers supporting Mr. Wilson conceded Mr. Hughes’ election – reports from the West and other States leave the situation somewhat doubtful. With the returns still incomplete the indications seem to make Mr. Wilson reasonably sure of 232 electoral votes, and Mr. Hughes of 218, leaving 81 to be assigned to one side of the other… 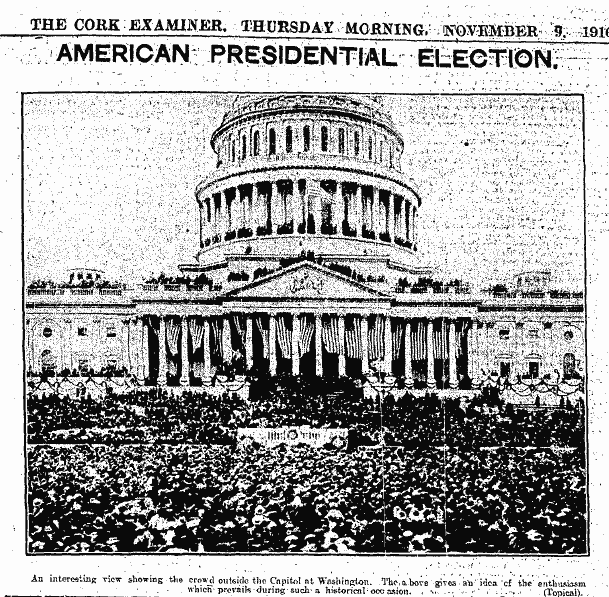 No Presidential Election since the Civil War has been so closely contested, and, owing to the fluctuations in the county, none has created more interest than that now concluded, but the result of which at the time of writing still remains unstated. A large number of people than have ever before voted in the United States, including men and women, took part in the election, and thought it was believed that the contest would be close, still the event proved to be more of a neck-and-neck struggle than even the most sanguine of the prophets dared to suggest.

The campaigns on behalf of Mr. Daniel O’Leary, B.L., Mr. Frank Healy, and Dr. Shipsey were pursued vigorously to-day in different parts of the constituency, can canvassing being mainly relied on.

Mr. T.M. Healy and Mr. Maurice Healy arrived in Bantry this evening, accompanied by Mr. John Walsh, M.P…. Mr. T.M. Healy’s speech was mainly devoted to an attack on the Irish Party. He commenced by saying that it was thirty-six years since he made his first speech in Bantry, and he was arrested for it and sent to Cork Gaol. Then there were arrests and imprisonments. To-day they had martial law.

Great Britain had entered this war because she believed firmly in liberty and was against oppression. But when they turned to Ireland, they found themselves in a different world. When the war broke out Ireland had behind her a long tradition of oppression. Great progress had been made in reconciling the people of Great Britain and Ireland, but unhappily the work was not completed. That was a singular misfortune for both countries. If recruiting had been properly conducted during the first six months of the war a very much larger number of recruits would have been taken. For a long time they had persisted for the formation of an Irish division, but the War Office had turned them away. Ireland had been rebuffed, and had been treated as nation hostile to this country.