Throughout Saturday and Sunday men from the County of Cork, arrested after the troubles of Easter week and confined in internment camps in England, but who were released last week, arrived in Cork. They were relatives and friends at the Glanmire terminus, and proceeded to their respective homes. Names of the Released in South and South East and Kerry listed.

Germany has proposed an immediate meeting of delegates of belligerent Powers to discuss peace. The proposal is contained in Germany’s answer to President Wilson’s Note… “The high-minded suggestion made by the President of the United States of America in order to create a basis for the establishment of lasting peace has been received and considered by the Imperial Government in the friendly spirit in which it is expressed.”

The Civil Service Commissioners announce that an open competitive examination for Women Clerkships in the General Post Office, etc. will be held in May Next.

We understand, says the “Evening Mail” that for military reasons the project to till portion of the Phoenix Park has been found impracticle.

Private J Donnelly, Royal Munster Fusiliers, a native of Cork City, who was wounded and taken prisoner at Mona on Aug. 27, 1914, and was in hospital six weeks. “During my time there I was,” he writes to a friend in Cork, “very well treated. Everything is going on well here with the boys. We have got plenty of amusement; we have got two concert rooms done up in splendid style; also a splendid stage in both of them. The paintings were done by a Dublin man.” 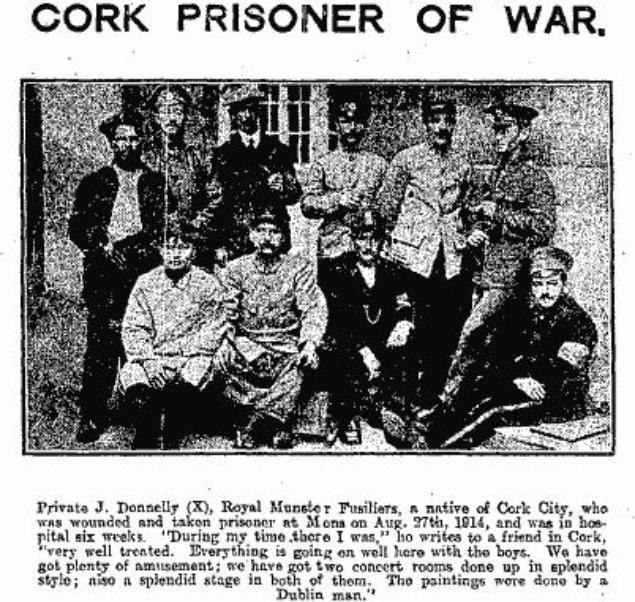 The dawn of another year naturally awakens prospective thoughts, and most people look forward with the sincere hope that 1917 will see the end of the war that has caused such widespread tribulation and cost Europe so much in blood and treasure.

On Sunday morning at 9.15 o’clock, during a dense fog, the Minehaha collided with the Italian steamer Lugano ff the harbour. The latter steamer was sunk and the captain and a seaman were drowned. The Minehaha belongs to the Atlantic Transport Co., and was outward bound. The Lugano was in ballast. THe survivors, 31 in number, were landed by the Minehaha, which rendered every assistance possible to the sinking Lugano. THe only damage sustained by the Minehaha is a few plates dented.

The Italian steam Lugano, supposed to have been sunk in collision with the SS. Minehaha, arrived yesterday at Cork Harbour, in tow of tugs. The Lugano is almost cut in two from above the forecastle head to the foremast. The body of the seaman was found pinned beneath the fallen foremast.

Yesterday morning a party of military police visited the printing establishment of Mr. P. Corcoran, Sullivan’s Quay, and took possession of the printing plant on the premises. This was subsequently removed to the Victoria Barracks.

Subsequently Mr. Corcoran was arrested and placed in the Military Detention Barracks.