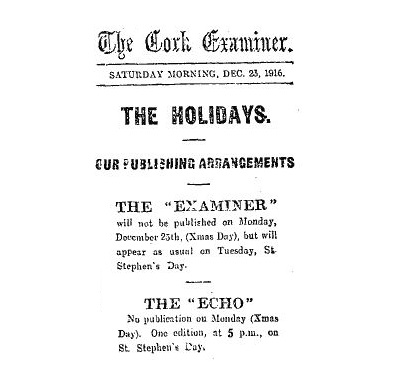 Mr. Dillon asked the leader of the House whether his attention had been called to the fact that the late Prime Minister had promised him an opportunity for discussing the question of the Irish prisoners…

Mr. Byrne –  Will the right honorable gentleman say when we might expect some statement in connection with the Irish prisoners – is he aware that a number of parcels of food have been returned to Ireland bad, and that prisoners have been denied the parcels of food sent by their friends?

Mr Duke – If the honorable member puts down a question on that matter I will enquire.

Mr. Byrne – I am absolutely tired of putting down questions. I cannot get any information.

After much deliberation about the war, the coming peace, national foot shortage and conscription, “I wish it had been possible for me to have said something today about Ireland… I am convinced that it is a misunderstanding, partly racial, partly religious. It is to the interests of both to work in the greatest harmony, but there is somehow an evil charm that seems to militate against every effort for better relations… I was moving in an atmosphere of nervous suspicion and distrust which pervaded a universally everything and everybody. I was faced by the suspicion of Irishmen by Englishmen, Englishmen by Irishmen, and worst of all of suspicion of Irishmen by Irishmen…. I am not merely speaking for myself, but for my colleagues, when i Say that we shall strive to produce that better atmosphere (cheers, and a Nationalist – Let out the prisoners!)

Dr Kelleher had stated “All the Gaelic movements are being sold by the men that got the custody of them. He protested against the men who got control of the Gaelic League selling it to a foreign enemy of their country. The language movement was shamefully sold.”

The best answer to the false charge that the Gaelic League was now political and sectarian was that on that very executive were men differing in religion and differing most acutely in politics. Their only concern there was the advancement of the language movement. Outside the Gaelic League they were free to take what political action they wished… The Gaelic League was for twelve months ending last August without a president, in the hope that Dr. Douglas Hyde may resume the presidency. As he was unable to do so, a president had to be elected last August. There were delegates from all parts of Ireland at the Ard Fheis, which elected Eoin MacNeill. Why was Eoin MacNeill elected? He was the virtual founder of the Gaelic League. He was its senior Vice-President, having occupied that position for many years. He had edited the Gaelic League official organs many years. He was an Irish scholar of European repute. Gaelic Leaguers knew that Eoin MacNeill was not a man of extreme political views; in fact they all knew him to be a follower of Mr. Redmond’s until a recent date.

Mr. Dillon’s persistency in keeping the case of the untried Irish prisoners before the House is to be highly commended, and in that line of action he has had the fullest support of the Irish leader and of his colleagues in the National Party. The question of amnesty had been too long delayed…

We understand, says the “Evening Herald,” that it is the intention of the Government to take over and til several hundred acres of the Phoenix Park for the purpose of agricultural allotments, which will be devoted to the growing of food crops.