Today, before Mr. Drury in the South Police Court, two men of respectable appearnace were charged on remand by Detective Sergeant Maurice Ahern and Detective-Officer Martin Forest with conspiring to defraud traders in the city by selling to them what was represented to be farmers’ fresh butter, but on which analysis was found to contain 60% of fats foreign to butter. 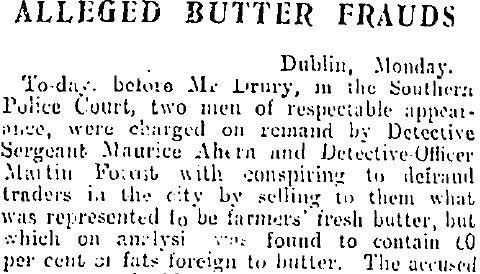 The Secretary of the War Office issued the following programme of the official War Office film: -The Battle of the Somme… The King expressed to them his unqualified approval of the Battle of the Somme pictures. In the course of conversation his Majesty remarked, “The public should see these pictures, that they may have some idea of what war means.”

At the Old Bailey, Thomas Coffeey, aged 32, was sentenced to six months’ imprisonment in the second division for personating Dr. Greehy, and practising as medical practitioner for years at Swansea.

Accused, who was described in the calendar as a soldier, pleased guilty to issuing certificates relating the deaths of three women and one man. Defendant, who wore the uniform of a Lieutenant in the R.A.M.C. at the police court, was now in mufti. It appeared that Dr. Greehy was assistant to Dr. Richard Coffey at Barrow, and there made the acquaintance of the defendant, Dr. Coffey’s brother. Dr. Greehy became a ship’s doctor. Defendant went to Swansea, took a surgery, called himself Dr. Greehy, obtained an appointment as Poor Law doctor, became public vaccinator and panel doctor, and for six years carried on the practice of a medical man.

Last year an application was received at the War Office from defendant in the name of W.J. Greehy from defendant in the name of W.J.Greehy for a commission. In February, this year, the real Dr. Greehy applied for a similar commission. The War Office noted the similiarity, and the imposture was discovered. Defendant went through a full course of hospital training, was Resident Medical Student at Meath and Dublin, but never became duly qualified.

Mrs Sheehy Skeffington states that she has not sought and will not accept compensation from the Government in respect of the shooting of her husband.

The King decorated Lieut. W.L. Robinson, the destroyer of the Zeppelin, with the Victoria Cross at Windsor Castle this afternoon. A number of other officers also received decorations. After the airman had been decorated he drove into Windsor, and received a great ovation.

The London Gazette tonight contains an Order in Council postponing the date of the coming into operation of the Government of Ireland Act, 1914, for a further period of six months, unless the present war has previously ended, or until such a later date as may hereafter be fixed by order in the council.