At Brentford Police Court this morning, William George Hollwey Miller, 24, a tutor, of Hartington road, Ealing, was charged with being an absentee under the Reserve Forces Act. A Police Sergeant stated that acting on information, he saw the prisoner, who told him he was not liable to serve, as he was an Irishman, and automatically exempt.

Major Smith said that he received information that the prisoner was of military age, and in occupation in Ealing, and he called upon him to attend at the recruiting office. The prisoner came to the office, and made the following statement: “I am an Irishman and a rebel, and I took part in the Dublin riots. I am a member of a Society hostile to England, and will not serve England in any way. I am an avowed enemy of England, and I will not serve, no matter what course you may take. I am an Irishman, and will not help England in any way.” Witness considered that the accused was a man hostile to England, and should be restrained in some way, no matter what course was followed, but he thought he was fully qualified to serve in the army.

Prisoner – Did I use the word “Rebel”?

Witness – I think you said so. You said you took part in the Dublin riots. I thought you were very frank in your statements and I was surprised.

At the request of the witness, the accused was remanded for a week. 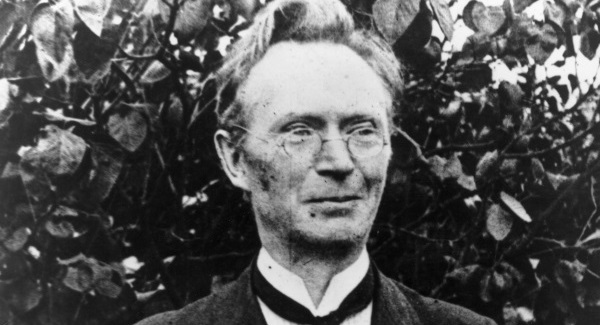 Mr. Michael A. Corrigan, solicitor, applied on behalf of Mr. Eoin McNeill, who is at present undergoing a life sentence in connection with the recent rebellion, to have Mrs. Agnes McNeill appointed as administrator over her husband’s monetary affairs. Mr. Corrigan explained that his application was made under the Forfeiture Act by which it was ordained that if no administrator or curator were appointed over the property of a convict, and if the justices at Petty Sessions were satisfied that such was the case, they could appoint an administrator. In the present case the sum of £97 5s was due to Mr. McNeill as part of his salary as professor in the National University, and he accordingly applied to have Mrs. McNeill made administrator. …The magistrates made the order sought.

Lest changing of the clocks on next Saturday night should be done in a careless or negligent manner, the Government has taken the unusual step of issuing a notice warning the public on the point. The Home Office does not undertake to instruct the Irish people on this manipulation of the time for it is expected a separate notice will be issued  for this country in view of the recently passed Time (Ireland) Act, 1916, which, as is now well known, substitutes Greenwich for Dublin time as the “normal” time in Ireland. As a consequence of the Act the Irish will adjust their clocks not by one hour, but only by 35 minutes. As this moving back process recklessly done is likely to cause injury to certain timepieces it may be no harm to quote the official warning….

That the war will end before the autumn of 1917 is still the hope of some, but is now the opinion of no more than a handful. It is no longer a State secret that the Allied governments are preparing to prosecute the campaign, not only through the winter of 1916, but also through the summer of next year. And part of the practical preparation for the winter and ensuring summer campaign is the provision and training of adequate reserves of men.

This need for men for the final phase, has led in England to the revision of exemptions and to the suggestions for raising the age limit for service, from 41 to 45. It has also led to a revival of the proposals for extending the Irishmen resident in Ireland the obligation of military services.

Rain, which had been threatening for some days past, fell heavily in Cork last night, and for hours a perfect deluge drenched the city. IN many places the sewers were choked, resulting in the flooding of thoroughfares in the immediate vicinity. Particularly evident was this in the Victoria road, where residents had to wade knee deep to reach or leave their houses.