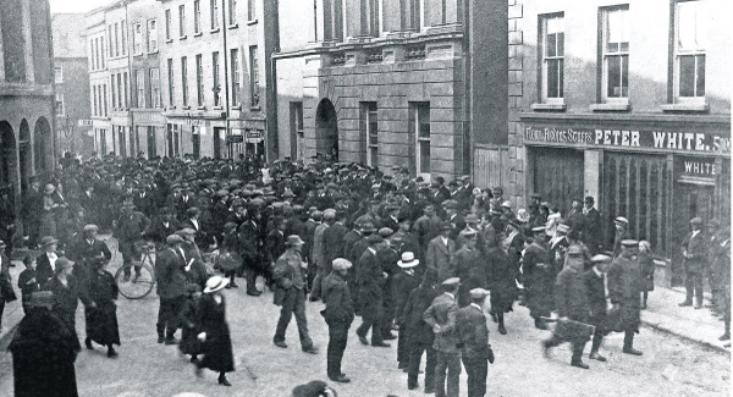 Throughout the morning, British shells continued to be fired on Dublin city centre.

James Connolly was wounded in the ankle after going out to inspect rebel positions, and struggled to make it back to headquarters in the GPO on Sackville Street.

In the afternoon, future Dáil Éireann Defence Minister Cathal Brugha was wounded badly at the South Dublin Union garrison which was under the leadership of Éamonn Ceannt. The fighting in the hospital had come down to close-quarter combat between rebels and soldiers. However, the area was largely left by British military forces on Thursday night as they focused efforts on fighting in other parts of the city.

Back in the GPO, a manifesto aimed at lifting spirits of his fellow rebels was dictated by the wounded James Connolly to his aide Winifred Carney. A British army doctor taken prisoner was helping to treat the injured signatory to the Proclamation of the Irish Republic.

With military reinforcements shoring up defences around Trinity College Dublin, communication and movement between rebel garrisons was made all the more difficult. From positions on the campus at the end of Grafton Street, and with sightlines towards Sackville Street, it was impossible for the insurgents to move arms, messages or people to or from the GPO headquarters of Connolly and Pearse.

On Thursday night, British soldiers also began invading the north inner city where the Volunteers under command of Tom Clarke’s brother-in-law Ned Daly had offered fierce resistance all week. The military effort involved efforts to occupy houses, leading to the shooting and killling of several uninvolved civilians in the North King Street area. 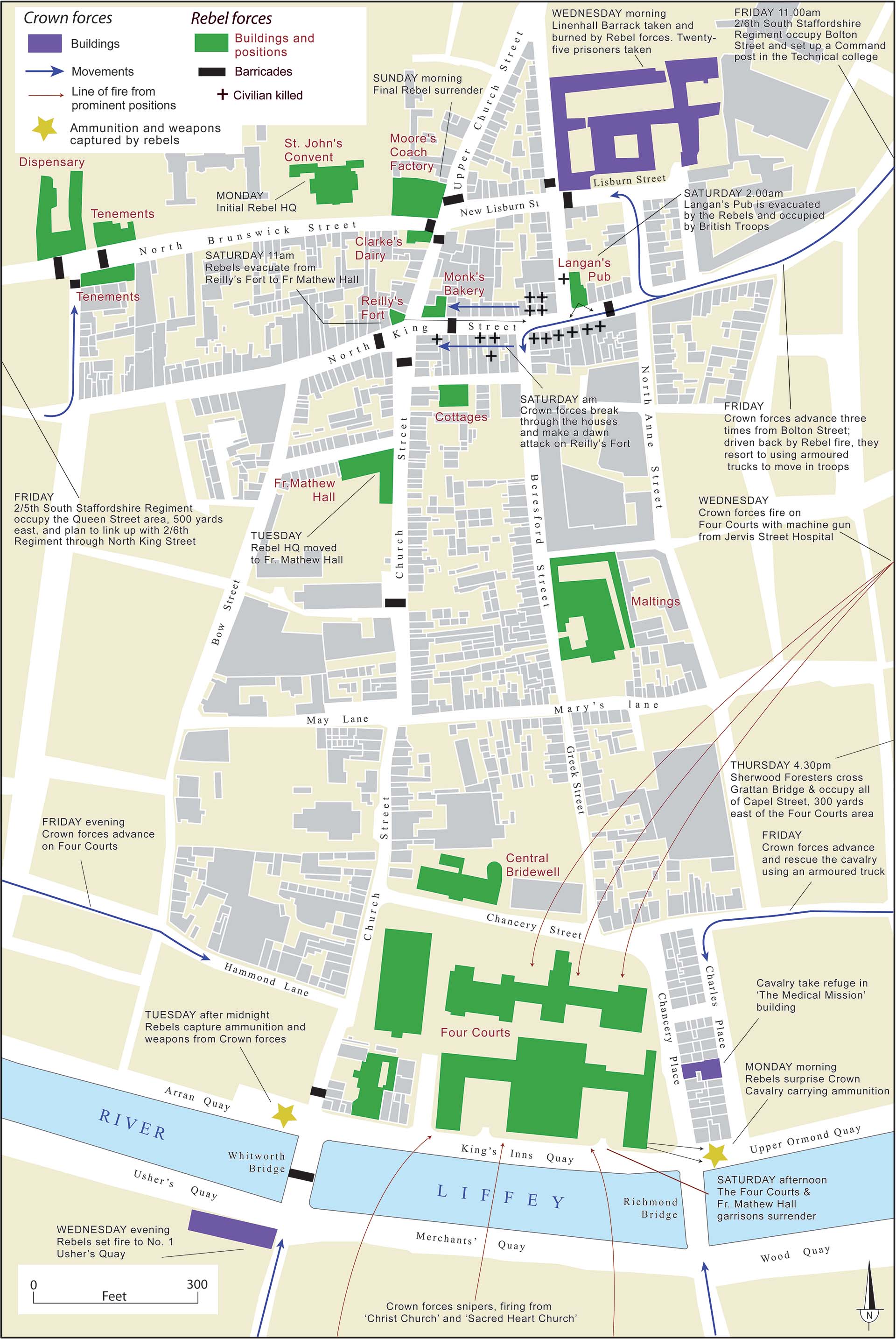 Heavy fighting erupted in and around the Four Courts, a complex of three large courthouses overlooking the north side of the River Liffey. Additional rebel strongholds established were established along North King Street and North Brunswick Street. The insurgents intended to block potential advances of British troops stationed at Marlborough and Royal Barracks in the city suburbs and to hold open a line of retreat through Phibsborough, north of the city centre, to County Meath, should the rebels decide to evacuate the capital. During the first twenty-four hours of the Rising, the rebels shot up a British cavalry column on Upper Ormonde Quay and captured an ammunition wagon on Arran Quay. However, at the same time, British troops and artillery pressed forward from the north towards Upper Church Street, sealing off Phibsborough from the Four Courts area.

By Wednesday, the rebels remained on the defensive, though they did seize the Bridewell police station and burn Linenhall Barracks on Lisburn Street. On the south side of the Liffey, British troops occupied homes on Usher’s Quay and shot across the river into rebel barricades and the Four Courts buildings. That evening, two insurgents dashed across Whitworth Bridge and set fire to No. 1 Usher’s Quay, driving soldiers from the area.

To the north, rebel outposts on North King Street and North Brunswick Street lay directly in the path of an intended linkup by the South Staffordshire Regiment’s 2/5th Battalion (advancing from the west) and 2/6th Battalion (advancing from the east). This led to fierce fighting all day Friday, as the British in Bolton Street tried to link up with troops in the Queen Street area. Attacks by the South Staffordshire 2/6th battalion were repeatedly repulsed assaulting Reilly’s ‘Fort’ and Langan’s Pub on North King Street.  However, the troops used a homemade armoured car to safely carry scores of soldiers into the street, and ultimately forced the rebels to abandon the post that night.

The next morning (Saturday), the insurgents likewise retired from Reilly’s Fort and fell back on Fr. Mathew Hall, isolating their embattled garrisons on North Brunswick Street. Angry over their heavy casualties, members of the South Staffordshires killed fifteen unarmed male civilians living near Langan’s, an episode later known as the ‘King Street Massacre’.

As British troops flooded into the area on Friday, the rebels beat back attempts to force the barricade at North King Street protecting Father Matthew Hall, while insurgents inside the Four Courts buildings exchanged fire with British troops along Hammond Lane. Fighting continued well into Saturday afternoon, and only stopped when Pearse’s surrender order reached the Four Courts garrison at 4 pm.  All rebel posts surrendered, except those cut off on North Brunswick Street. They held out until Sunday morning, and were the last of the Dublin garrisons to lay down their arms. [Source: Atlas of the Irish Revolution, (CUP, 2017)]