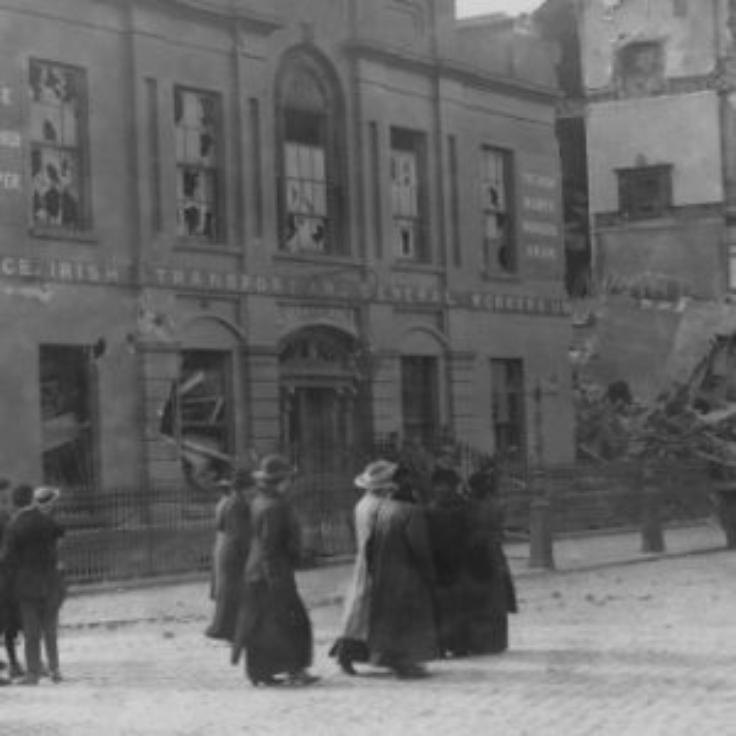 On Wednesday morning, Francis Sheehy-Skeffington and two other journalists were executed by firing squad under orders from Captain J.C Bowen-Colthurst.

The illegal executions would prove one of the most controversial incidents of Easter Week 1916, leading to the army officer’s trial in which he was found guilty but insane.

From early on Wednesday morning, the artillery that the rebels had counted on not being used by the British military began to land on key strongholds.  Liberty Hall was bombarded, and the arrival of the gunboat Helga up the River Liffey saw other locations occupied by the Irish Volunteers and others were also under heavy fire from shells. By the end of the day, the GPO had joined the list of artillery targets.

In the morning, members of the Sherwood Foresters newly arrived by boat at Kingstown (Dún Laoghaire today), began making their way towards the city centre.

From around midday, they were engaged by a small group from the Boland’s Mill garrison in the east of the city, who had occupied houses at the corner of Northumberland Road and Mount Street.

In one of the most celebrated actions by the rebels, but one of the worst for the British army, just 17 Volunteers delayed the military reinforcements to the city centre.

By the middle of the day, the Irish Volunteers garrison held by Seán Heuston at the Mendicity Institution had surrendered. He was found with an order from James Connolly in his possession, a document that would secure his conviction that led to his execution on 8 May 1916.

He was hiding out in a cousin’s house after shooting a boy in Tipperary town. Hurley died at the scene, Rourke died of wounds the next day. Both were natives of west Cork.

General Sir John Maxwell was dispatched to Dublin on Wednesday night, ordered to quell the Rising. In addition, military power to try rebel prisoners by court-martial instead of in the usual court was granted on the Wednesday, paving the way for the executions that would later help swing public opinion towards those who took part in the rebellion. 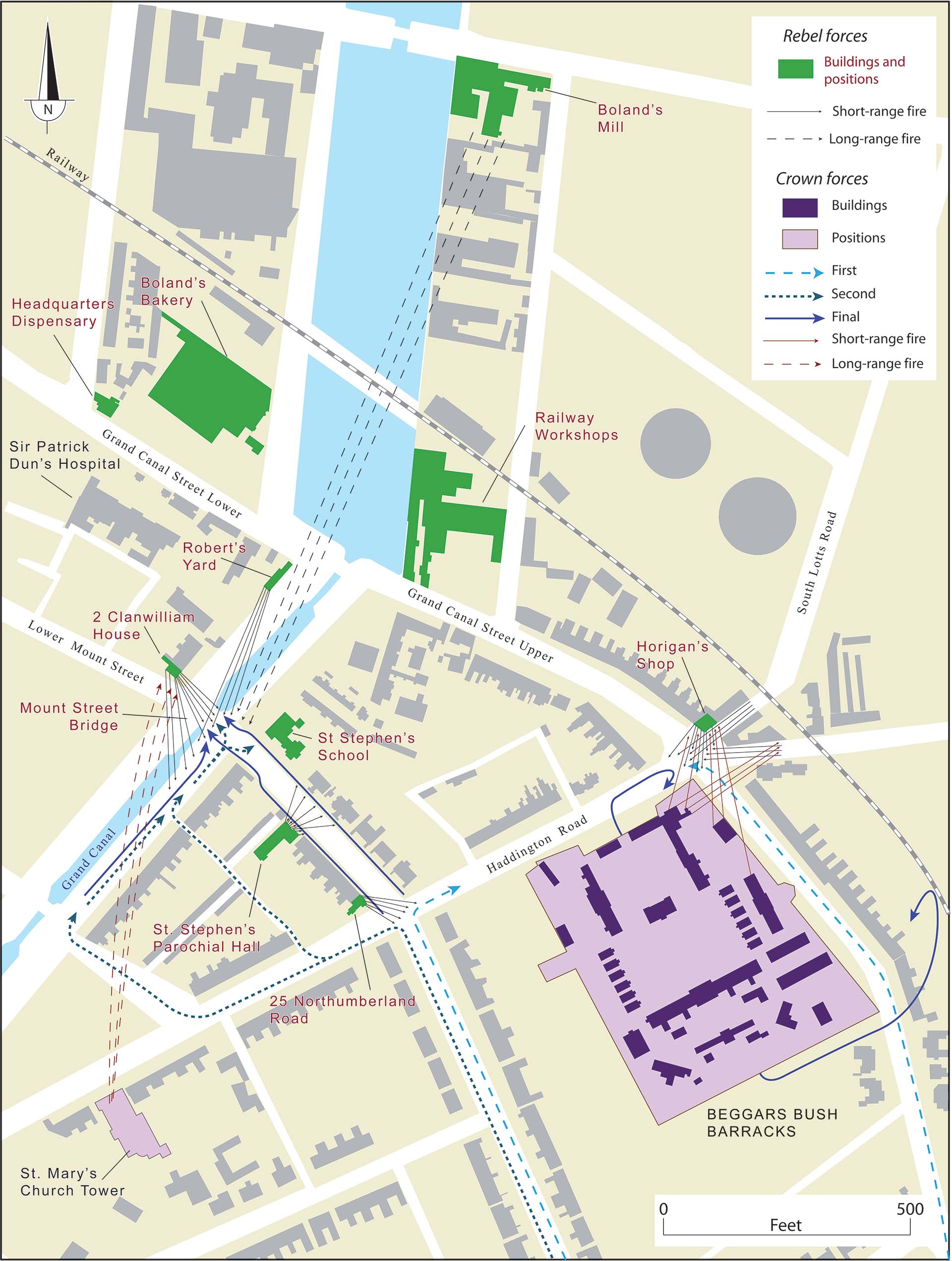 During the ‘Battle of Mount Street Bridge’ a handful of Irish Volunteers held off hundreds of British soldiers for a full day in a leafy suburb of Dublin. Seventeen rebels in four posts commanded the approaches to Mount Street Bridge, the anticipated line-of-march to the city centre for British reinforcements landed at Dún Laoghaire. The three-storey townhouse at 25 Northumberland Road acted as the rebels’ forward position, and controlled the junction with Haddington Road. Inside were two determined and well-armed Volunteers, Captain Michael Malone and James Grace.

Closer to the Grand Canal at 1-5 Northumberland Road stood the St. Stephen’s Parochial Hall, occupied by four Volunteers. Seven Volunteers defended the three-storey Clanwilliam House on the far side of the canal, overlooking Mount Street Bridge. They were covered by four Volunteers in Robert’s Yard, a building contractor’s premises at the corner of Lower Grand Canal Street. Additional supporting fire would come from the upper stories of Boland’s Mill, the headquarters of Éamon de Valera’s 3rd Battalion of the Irish Volunteers.Rebel posts along Grand Canal Street at Boland’s Bakery, the Railway Workshops, and Horgan’s shop protected the northern approach.

Facing the Volunteers were roughly 1,700 British soldiers from two battalions of the 2nd Sherwood Foresters Brigade, part of the British 59th Division that arrived in Dún Laoghaire from England on Wednesday morning, 26 April.

Advancing through Ballsbridge at about noon, the troops fell under intense gunfire at the Haddington Road/Northumberland Street junction. Repeated charges were repulsed, while appeals to use an alternative bridge were rejected by the British Army headquarters.

Resistance at 25 Northumberland Street continued for hours, until the troops swarmed the house (Malone was killed and Grace escaped). Moving forward, the Sherwood Foresters came under fire from the Parochial Hall and Clanwilliam House, though they mistakenly believed the source was St. Stephen’s Schoolhouse, which had been fortified by the Volunteers but then evacuated the previous day. The Parochial House garrison inflicted additional casualties before withdrawing after its ammunition ran out. The British troops then rushed across Mount Street Bridge against Clanwilliam House, which resisted fiercely for hours. The position finally fell after the house caught fire and three of the defenders were killed.

The British Army had secured Mount Street Bridge, but only after a ten-hour fire fight that cost them significant casualties (224 wounded and killed). For the outnumbered Volunteers, it was an impressive feat of arms.