A photograph of the actual stamp of the Irish Republic. One of the only specimens to escape the Dublin Post Office fire. It is supposed to have been printed at Liberty Hall. 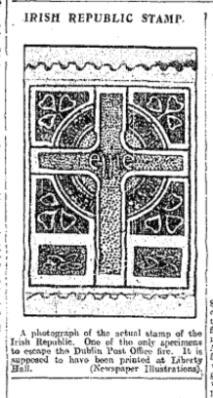 The following is published today:

By the Lords Justices General and General Governors of Ireland.

Whereas disaffection and unrest still prevail in certain parts of Ireland, causing anxiety and alarm amongst the peaceful and law abiding subjects of His Majesty.

Now We, the Lords Justices General and General GOvernors of Ireland do hereby proclam that a state of Martial Law shall continue to exist throughout Ireland until further other.

God Save the King

Of the rebel leaders who were executed (says “Wayfarer” in “The Nation”) MacBride’s bearing was the most soldierly. The officer in charge of the firing party showed (I am told) some emotion. MacBride said, gently, “Do not let what you have to do ever disturb your rest.” And when it was proposed to blind his eyes he refused, and said, “I’ve been looking down rifle-barrels all my life. Fire when I bow my head.”

The Royal Commissioners re-assembled today in Dublin. The first witness called at the opening of the sitting was Sir John Ross, of Bladensburg, former CHeif Commissioner of the Dublin Metropolitan POlice. He said he believed the landing of arms at Howth on 27 july 1914 was an event intimately connected with the Dublin rebellion; but in the statement he now read referred to a few matters that occurred before that day. The Government allowed the Arms Act to lapse in 1906, and thereby everyone in Ireland was enabled to arm. THis appeared to him to be an extraordinary step for any Government to take.

In the House of Commons this evening Mr. Tennant informed Mr. Lough that up to the present 352 out of a total of about 2,000 persons who were arrested in connection with the Irish rebellion had been released.

Both Houses of Parliament will adjourn Thursday, today until June 20th for Whitsuntide Recess.

A party of twelve of the rebel leaders, sentenced by court-martial to long terms of penal servitude, were last evening removed from Dublin en route to Dartmoor Convict Prison.

Amongst them was Mr John McNeill whose sentence for life was announced yesterday. The party were brought down to the shipping wharf in the police van, and took their departure in the 7:30 steamer cargo service. Some wore ordinary dress, and others were attired in the Volunteer Uniforms. During transfer to the steamer public business about the wharf was cut off. A military escort of twenty accompanied the prisoners on the journey. 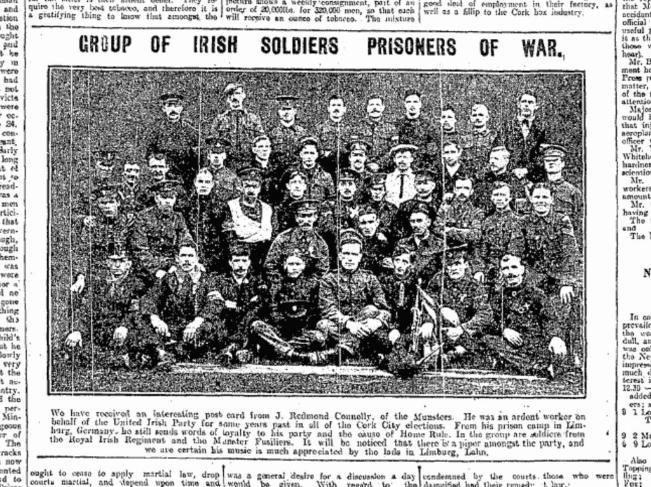 We have received an interesting postcard from J. Redmond Connolly, of the Munsters. He was an ardent worker on behalf of the United Irish Party for some years past in all of the Cork City elections. From his prison camp in Limberg, Germany, he still sends words of loyalty to his party and the Cause of Home Rule. In the group are soldiers from the Royal Irish Regiment and the Munster Fusiliers. 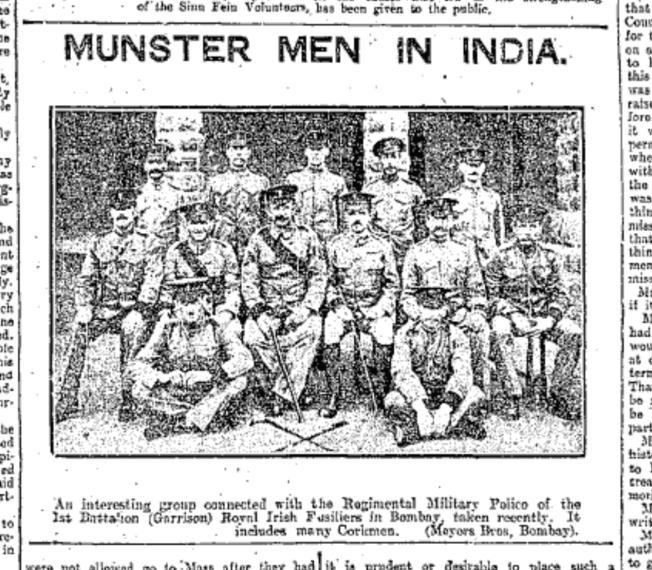 It will be noticed that there is a piper amongst the party, and we are certain his music is much appreciated by the lads in Limburg.