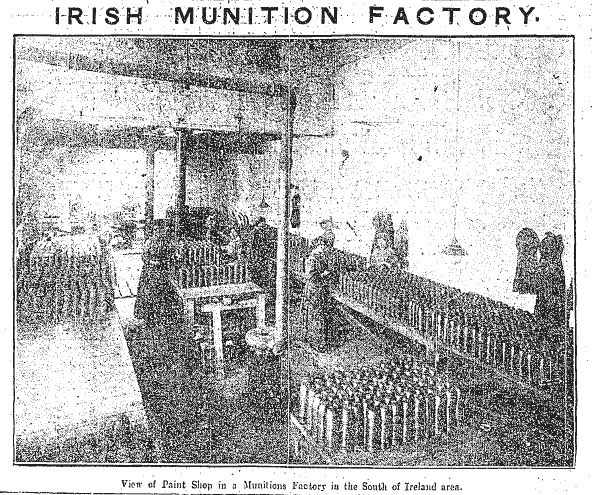 Photographic evidence from the Irish Examiner archive that a British Forces Munitions factory has opened in Cork City. As reported in A 1916 Diary in May 1916, the mayor negotiated a rental agreement with the Ministry of Munitions was announced on Thursday May 25, 1916.

During the month of February last, it will be remembered that a young man named Stephen Harrington, living near Allihies, made a very heroic effort to rescue a neighbour of his named James Sullivan, of Croom, who had been swept off the cliff while gathering seaweed. The very brave action was commented upon favourably far and wide at the time. We understand that through the offices of Sir Henry Black the Order of St. John of Jerusalem have determined to present a medal to Stephen Harrington, and he is also to be rewarded from the Carnegie Hero Fund.

The National Directory of the United Irish League, which represents the supreme National Authority in Ireland, met yesterday in Dublin, and it need hardly be stated that the deliberations of the Directory at this critical period of Ireland’s affairs were of vital importance, and the decision reached on the Lloyd Georgian proposals harmonises completely with the views of the Irish people. At a period when desperate efforts are being made by the false friends and the open enemies of Ireland within her shores to cause a rupture which, if it occurred would necessarily throw Irish hopes into the melting pot, it is gratifying to find that wise counsels and calm judgements characterise the gatherings of representative Irishmen, and the fact that the National Directory, with only two dissidents out of 80 present, approved of the Lloyd George scheme as a provisional measure, thereby endorsing the decision of the Ulster Nationalists, is proof that, judged by any test of patriotism or sacrifice, Irishmen can rise to the greatest heights when their country’s interests are concerned.

As the opponents of Home Rule have gone to the extremist lengths to raise false issues and to induce Irish Nationalists to believe that the exclusion of the six Ulster counties is intended to be permanent, it may be advisable again to set out the precise terms of the proposals made by Mr. Lloyd George on behalf of the Coalition Government. They are six in number, and are as follows:

1. To bring the Home Rule Act into immediate operation.

2. To introduce at once an Amending Bill, as a strictly War Emergency Act to cover only the period of the war and a short specified interval after it.

3. During that period the Irish members to remain at Westminster in their full numbers.

4. During the war emergency period six Ulster counties to be left as at present under the Imperial Government.

5. Immediately after the war an Imperial Conference of representatives from all the Dominions; of the Empire to be held to consider the future government of the Empire, including the question of the government, of Ireland.

6. Immediately after this Conference, and during the interval provided for by the War Emergency Act, the permanent settlement, of all the great outstanding problems, such as the permanent position of the six exempted counties, the question of finance and other problems which cannot, be dealt with during the war, would be proceeded with.

It is remarkable that the publication of the findings of the Royal Commission on the Rebellion in Ireland should synchronise with the sitting of the National Directory, and though those findings were discounted in advance for the reasons that the terms of reference were manifestly unjust and absurd, and as Lord M– pointed out when the Commission met that “it would be impossible to disassociate the events from the landing of arms which took place at Howth and at Larne,” it is, nevertheless, somewhat significant that the report which we publish today should be issued at a time when the opponents of Home Mule are doing their utmost, to prevent any arrangement being effected which would bring Irish self-government into immediate operation. 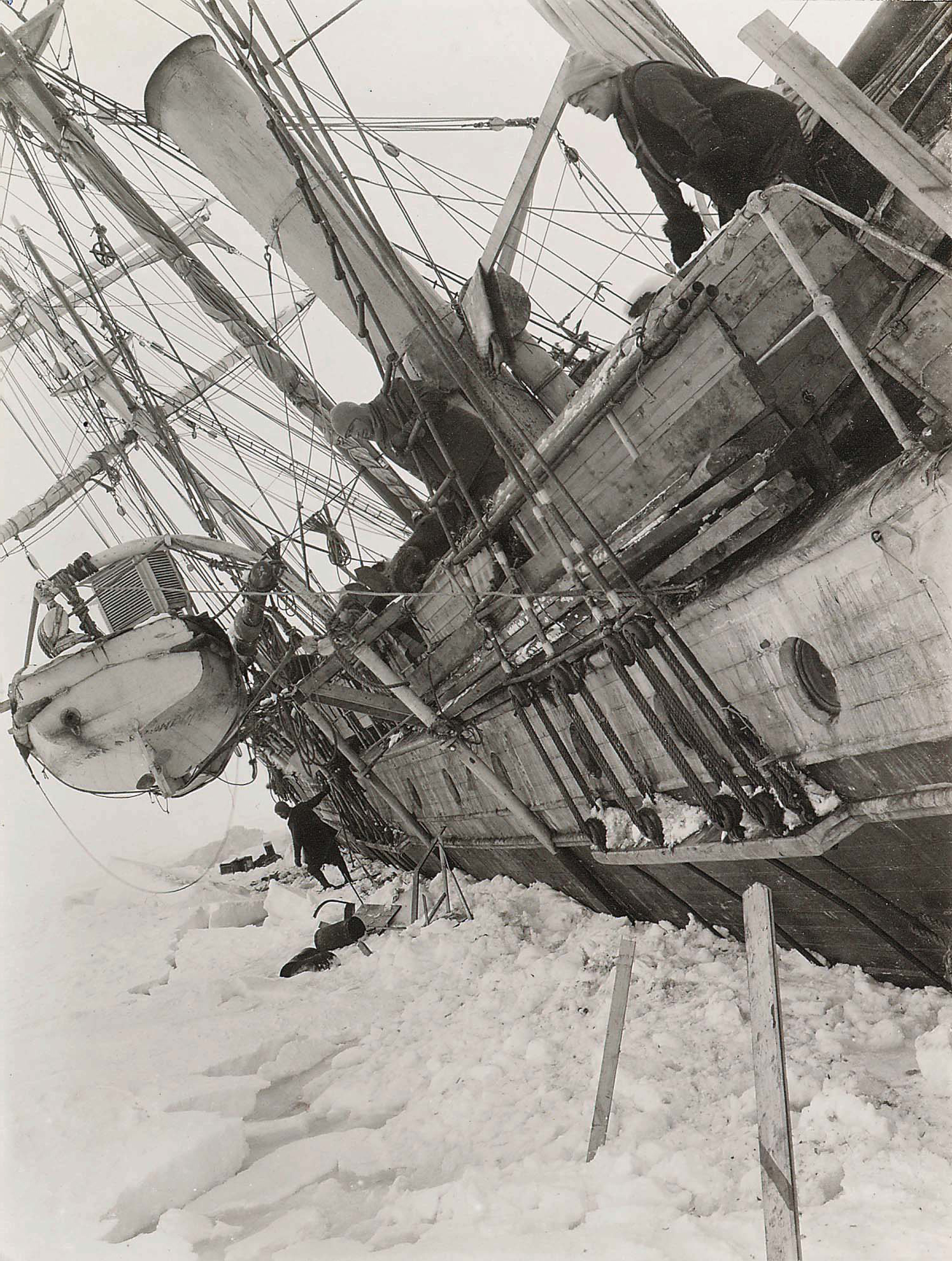 Picture taken by Frank Hurley of the ship Endurance, which was used by the Irish Explorer Ernest Shackleton on his Trans-Antarctic Expedition between 1914-1917. This is a picture of Endurance frozen in the Icefloe. Picture: Irish Examiner

The Uruguayan Minister of Marine has ordered the steamer Instituto Pasca, which recently failed in an attempt to rescue the members of the Shackleton expedition on Elephant Island, to return immediately and complete repairs. She is to start again directly when the ice which bars the way to Elephant Island, shows signs of the breaking up. Sir Ernest Shackleton is expected here at the end of the month to offer the Uruguayan Government his personal thanks for the efforts it is making on behalf of the stranded members of his expedition.

Mr. Thomas Bodkin, the well-known Dublin connoisseur, has written the following critique of the stained-glass windows for the Honan Hostel Collegiate Chapel, which were on view in Dublin last week: “The windows which Mr. Henry Clarke has designed and executed for the Collegiate Chapel in the Honan Hostel at Cork are a very noble achievement. Nothing like them has been produced before in Ireland. The sustained magnificence of colour, the beautiful and most intricate drawing, the lavish and mysterious symbolism, combine to produce an effect of splendour which is overpowering. Four windows of the proposed series are at present finished. Saint Ita, Saint Fingar, Saint Columba and Saint Bridget. If the succeeding designs at all approach the merit of the accomplished work the Honan Hostel will become a place of pilgrimage, for lovers of great art at least.

Ever ready to obtain the best and most up-to-date for the Palace Theatre, the popular and very efficient management has now given further evidence of his lavish cater for public taste, and for fourteen weeks, commencing on Monday night next, he has secured for the Palace the exclusive rights of the Keystone comedy films. Included in the Keystone creation are three Chaplin films, and on Monday, Tuesday and Wednesday night next week the film to be shown will be one of the Charlie Chaplin series, entitled: “Dough and Dynamite.”

Published together: censorship of the Easter Rising?

Mr. James Hogan, bookseller and stationer, Main street, Tipperary, who was arrested on the charge of exhibiting for sale in the windows of his premises postcards with pictures of the Dublin Rebellion scenes, was subsequently released by the military authorities.

“Irish Life” has issued, under the above title, an extensively illustrated booklet with it coloured cover. The record opens with a sketch entitled “Some Recent History,” which deals with events leading up to the rebellion. There are photographic reproductions of the various rebel leaders and of other prominent persons associated with the movement, and with each of these is given a short account of the subjects. Some capital views are given of the damaged buildings and of places occupied during the rising; Tho account of the rebellion itself is written in a racy style, and purports largely to be the work of someone who saw the progress of affairs with his own eyes. The reproductions of the ”Irish War News” and of other documents are a valuable feature of the booklet. It is neatly printed, and is altogether a readable piece of work.

Trinity College Library has made a digitised volume of the “Record of the Irish Rebellion” available online here.

Sir.—’With reference to the discussion which look place at a recent meeting of the Cork County Council on this subject, I must say that a great many ratepayers strongly complain that some students hold these scholarships whoso parents or guardians could very well afford to pay for their university education. It certainly is the duty of the County Council to confine them to promising poor students, the children of farmers holding land of the annual value of £100 and upwards should be debarred from receiving them, and so should those of other persons in receipt of annual incomes of £300 and upwards, no matter how many children are in the family. Other qualifications limiting them still further might be devised. The neighouring counties of Kerry, Limerick, and Waterford (and I believe Tipperary) took the trouble to confine them to the proper people from the start, but Cork did not. The friends of the workers in the Cork County Council should bestir themselves, and prevent any further laxity in the awarding of these valuable scholarships which should be altogether confined to the poor man’s child.