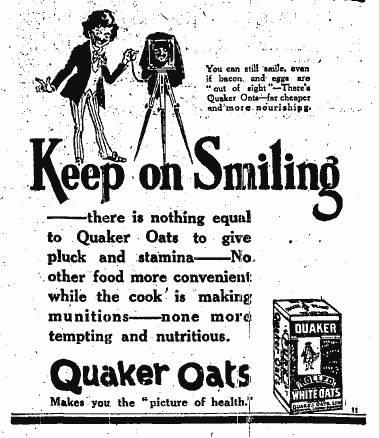 For supplying drink to a wounded soldier, stationed in the Tipperary command depot, Hanora Frawley, Old Road, Tipperary, was fined 10s 6d. For the same offence Denis Tatton and Agnes Fitzgerald were fined a similar sum. The police evidence in the last case was that a large vessel containing porter and a number of cups with traces of porter in them were found under a bed in a room off the kitchen. In the kitchen were 5 wounded soldiers, some of whom showed signs of drink.

Though it has come to be generally accepted that the Government will not try to enforce conscription in Ireland, still as there is nothing absolutely immutable in Cabinet decisions, and as Ministers seem largely to be creatures governed by expediency, it might be as well that the possibility of Government action under Tory duress should not be entirely ignored or overlooked. (pic of Lloyd George)

On the motion for the adjournment of the House of Commons last night, Mr. Byrne complained of the treatment of Irish prisoners at Frongoch Camp. The home secretary replied that the hon. Member had offered no proof of the truth of any of his assertions.

Sir – Can anything be done in Cork on the same lines as the Vacant Land Cultivation Society are working in Dublin? The Society was established about six years ago for the purpose of having the waste land within the city planted with vegetables, and it has extended its usefulness by securing allotments further out for some of the landless, who are desirous of having some potatoes and other vegetables of their own growth. The usual procedure is to take a field which is advertised to be let for building and apportion it into plots, eight to the statue acre, for which 7s 6d is charged. There are now about 300 such plots round Dublin, on each of which is grown sufficient potatoes for half the year, and other vegetables for the year for an average family… M.K.

“If President Wilson is defeated next week, one of the Germans will say we did it, and it is this very knowledge that is going to help elect Woodrow Wilson.” …Mr. Hughes, the Republican candidate, has found it necessary to put into the form of a statement which was issued yesterday, the “things I shall stand for as President.” One is his determination to protect Americans in Mexico. He also considers it the President’s first duty to look after the interests of his own country. He declares that no one is more determined the maintain peace, and he proposes to see that peace is kept by “firm and courteous insistence on the rights of Americans at home and abroad.” He also declares that he stands for American prosperity, not only during this war but when this war is over. Page 3: A Snapshot of the times

Rev. G. O’Neill, S.J., Dublin, who lectures this evening to the Cork Catholic Young Men’s Society on “Lore and Legend of Holy Wells.”

Professor Tadhg O’Donoghue (“Torna”), who has been elected to the vacant professorship in Irish Language and Literature at University College Cork.