Submarine piracy under the Austrian flag is rampant in the Mediterranean, where the enemy’s submarines have probably given themselves a rendezvous because others waters are too dangerous. They have been the cause, with the last few weeks, of a series of tragic scenes. Steamers with passengers aboard have been suddenly attacked by submarines, which, without warning, opened fire upon them. 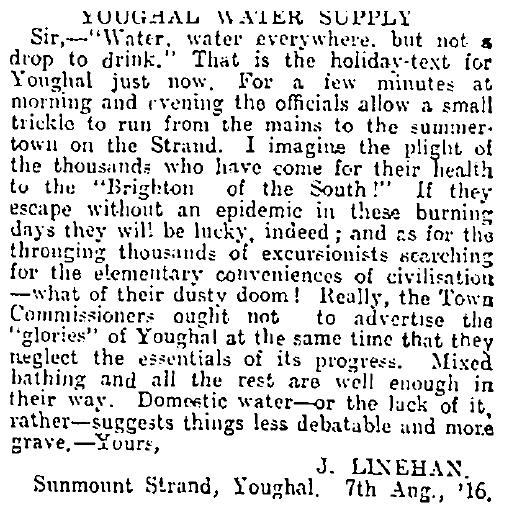 Sir, –”Water, water everywhere, but not a drop to drink.” That is the holiday text for Youghal just now. For a few minutes at morning and evening the officials allow a small trickle to run from the mains to the summer-town on the Strand… Really, the Town Commissioners ought not to advertise the “glories” of Youghal at the same time that they neglect the essentials of its progress…. -Yours, J. Linehan, Sunmount Strand, Youghal 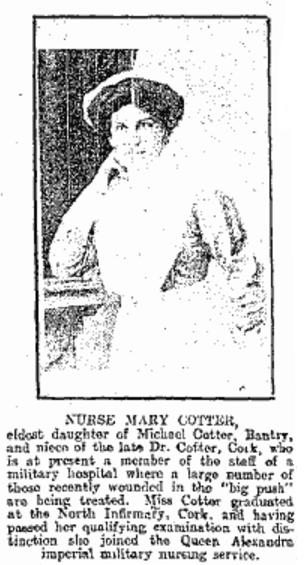 The pleasing intelligence has reached Midleton that in connection with the “Big Push” of the British Forces in France, a private in the Royal Munster Fusiliers and a Midleton man has covered himself with glory. This hero is Private Bartholomew Barrett, RMF, of Park Street Midleton, who some sixteen months ago volunteered for service with the colours… He has since been on active in France and when the “Big Push” of the 1st July began he was in the thick of it with his battalion.

A Londonderry Telegram states the County demonstration of the Ancient Order of Hibernians, which was to have been held in Ballybofey, Dongal, has been prohibited by the military authorities.

In  consequence of unfavourable reports from America concern the spring wheat crop… there is a great shortage of supplies. Blight is reported widespread in Minneapolis and Minnesota districts. Grave fears are entertained of it spreading to the Canadian districts. Should this occur still higher prices may be expected. As a result, the flour markets have already reached a figure the highest on record since the Crimean War. (1854-56)

Nobody really wants a general election at the moment… No genuine contest could take place under existing conditions. Following conscription, almost every male voter up to 41 years of age is in military service. The situation at the front does not lend any support to the suggestion that they could record their votes. Another class, the munition workers, have shifted their residences from one part of the Kingdom to another, and according to the existing franchise laws have lost their right to be put on the register.

Outside the war, indeed, the Cabinet at present, with its politicians who refuse to see beyond their Party noses into a future that cannot be a bit like the Britain of a few years ago, seems absolutely the negation of Government – incompetent, irresolute, impotent.