Sir – Kindly allow me space in your valuable paper to draw the attention of hte public to the great delay and inconvenience caused by the censoring of our American mails. We with relatives in America, on whom we depend, receive a monthly allowance. Prices are really high owing to the war, and our letters are allowed to be thrown aside in Liverpool for weeks to be ‘Opened by CEnsor,’ which causes a delay of perhaps weeks. On enquiry at the GPO we are informed they are dleayed owing to lack of hands to censor them; also we are informed that if we want our letters to be despatched directly we are now to pay a fee of 2s 6d, which comes very hard on poor people. We have many calls to meet in the meantime, such as rent etc., and it is also a shame to have our letters relating to family matters perused by young people who open our letters and despatch them when it pleases them. Surely something can be done by our local city gentlemen in the matter. Yours faithfully,
A Sufferer

To-day mass at St. Saviour’s Church, Dominick street, was offered up for the repose of the soul of Major John MacBride. At the conclusion of the ceremony a large crowd gathered outside, and the friends and relations on emerging from the church wore the recipient of a sympathetic demonstration. Cheers were also raised for the other leaders of the insurrection. Republican favours were very much in evidence, and the concourso joined in singing _”Who Fears to Speak of Easter ‘Week,” ”God Save Ireland,” and “A Nation once again.”

At Dublin Sessions today Mrs. Mary Murray claimed compensation for the loss of her husband, a coachman, who was shot dead in Dublin during the rebellion. The counsel stated deceased on Easter Monday, after returning with a party from Fairyhouse races, was going down Bow street , when some rebels called on him to stop. He endeavored to do so, but apparently not with sufficient rapidity to please the gentleman with the revolver, who shot him dead. He left a widow and six young children, the youngest of which was three months old. Thomas Green, coachman, gave evidence that when turning the corner he heard shots, and on going up to the brake he found Murray dead. Soldiers told them to by Ellis street. The Recorder—When you saw the soldiers did not you know there was something going on?—We knew there was trouble, but we did not expect to be shot. The Recorder—You only expected soldiers and policemen to be shot. On the suggestion of the Recorder the case was allowed to stand. The Recorder said it was a very wicked and shocking crime. The man could not have been shot accidentally, he must have been shot deliberately. Counsel for respondents said this was the first of these cases. 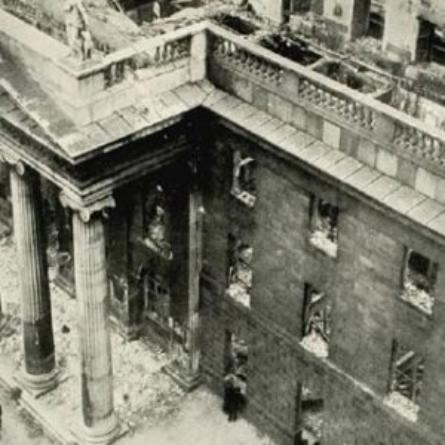 Today, in the Probate Court, before Mr Justice Madden, in the matter of the goods of Henry F O’Brien, an application was made on behalf of the executors of the will of deceased for leave to apply for a grant of probate of the will which had been lost. It appeared that he will was destroyed in the General Post Office, Dublin, during the recent rebellion, having been posted in Cork on April 22.

Mr Bartley, who appeared for the applicant, said that had a letter from the General Post oFfice, in which the belief was expressed that the letter containing the lost will was destroyed in the first which took place in the Post Office. They had a verified copy of the will. The only next of kin were the beneficiaries on whose behalf the application was made. The court granted the application.

Sir – As a Belfast Orangeman, might I give you my blunt opinion on the Home Rule settlement? Nothing hurt me more than that Ireland should be divided up. I stood many a hard argument and insult here through advocating Home Rule, but no matter; listen to me. South: A Parliament in Dublin meant Ireland a Nation. Nobody here with common sense believes that the Carsonites will ever help anyone, and as soon as the religious hunker-slide and persecution swank passes out of the workers’ minds (and it will pass in a very short time) the Provisional Government will get the short knock, and these same workers will look towards the Irish Parliament. I am not an educated man, and I can’t write the sentiments I have in my heart; but I say trust Redmond; don’t argue with him; take all you can get – the six counties will follow. Belfast business men know where their living is and who they live on. They live on you, Papists, although they ahve hardly a good word to say in your favour. They count on the Ulster Nationalists kicking up a row over the exclusion or as they say, the confusion of Home Rule. I say again for Ireland’s sake: Trust Redmond. If a row is raised now, we will never get home rule. England will look on every Irishman as a Sinn Feiner, and Englishmen when they have taken all the credit of the war, will not be able to see that any Irishmen fought there at all. Now is your opportunity, play the game -after the war will be too late. Take what you are getting now and fight for me, and we will help you. Good luck to you.

As the facts become known concerning the Armenian massacres the certainty is established that the Turkish Governments aim was the utter extermination of the Armenian race in the Ottoman Empire. How nearly this ruthless object has been accomplished is shown by more information sent to the “Journal” by its special correspondent at Erzerum, who makes this terrible statement:

“At the beginning of the year 1916 there were two and a half millions of Armenians in Turkey. Today there are only 500,000! Two million human beings massacred by order of the Young Turk Government! The Journal correspondent says the survivors number about 100,000 in Mesopotamia (but this number is dwindling rapidly owing to deaths from privations and ill-treatment) 100,000 in Cilicia, 150,000 in the western districts of Asia Minor, 180,000 in Constantinople and Smyrna. The Armenian Catholic clergy who have been massacred are the Bishops of Mardine, Kharput, El Jezireh and Diarbekr, besides numbers of priests and Sisters of Charity. Armenian churches have been sacked or destroyed, or converted into Turkish uses.”

The verdict of the representative Conference of Ulster Nationalists that sat at Belfast yesterday to consider the proposals of Mr. Lloyd George (which in effect are Government proposals) has shown the world that Ulster Nationalists are willing to make sacrifices for the land they love, and a lead has been given to the three Southern provinces, which will now readily fall into line and end faction and disruption for ever.

One cannot eulogise too strongly the high ideals and lofty patriotic spirit which impelled the representatives of the Nationalists of Ulster to accept by such an overwhelming majority the arrangement that brings Home Rule into operation for twenty-six counties, but it is those disinterested ideals and that self-sacrificing spirit in Irishmen which has made their cause immortal. The duty of the rest of Ireland outside Ulster henceforward must be to prove by the excellence of their administration, and by their emulation of the splendid spirit that has covered the men of the North with glory, that they still regard their country as being in a transitional stage, and that they are more resolved than ever to win for the Nationalists of Ulster that place in her country’s councils which they have voluntarily abdicated in order to serve the common cause.

Men who can act as the Nationalists of Ulster have acted, who can control their political passions and judge and examine stupendous issues calmly and critically in a time of crisis who can temporarily submerge their claims and interests so that the rest of the country may achieve its aspirations, are men worth fighting for, and therefore all classes of Irishmen must strive and co-operate so that the coming in of Ulster under Home Rule will not only be inevitable, but that it will not be long delayed.