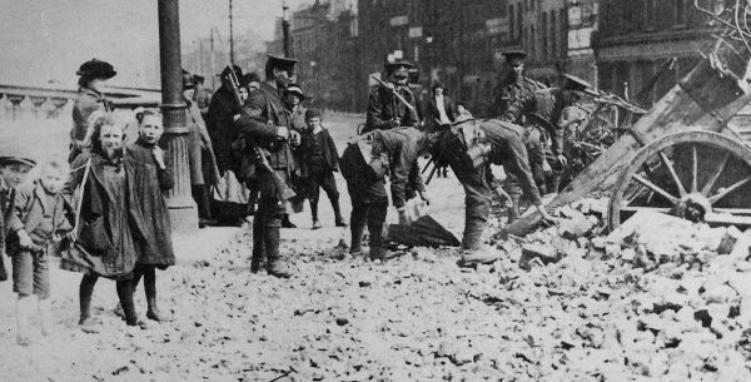 In the High Court of Justice, Chancery Division, Mr. Justice Eve granted Bovril (Limited) an injunction against the Bodega Company (Limited) restraining them from passing off as Bovril, or in response to orders for Bovril, any other meat preparation.

The Plaintiff Company complained that in response to orders for Bovril, Oxo had on numerous occasions been substituted by the defendant company without comment or explanation. This, the defendant company denied. An injunction was granted, as stated, and the Bodega Company was ordered, to pay the costs of the action.

Patent No. 23,420. Toys. T. Crawford, Wilton House, Stapleton place, Dundalk. This invention relates to a top which comprises two soldiers or other figures mounted on bases, through the ends of which cords are passed in an inclined direction. At one end, the cords are attached to the table by means of a yoke and hook. The other ends of the cords are jerked alternately by the operator, thereby causing the figures to approach one another until, on impact, one figure forces the other in the reverse direction.

Mary Barry, stated to reside in Brown Street, was charged by Head Constable Butler with the larceny of 7shillings from Private Patrick Donovan, RFA. Head Constable Butler said the occurrence took place on the 26th of last month. The evidence in support of the charge was very weak, and he would be glad if the Bench would hear the case verbally before taking depositions.

Private Donovan said that on the 26th March he and a friend met the accused at the Grand Parade. He did not feel her put her hand into his pocket, but could swear he had the money immediately before he met her, and immediately after, when he went to get cigarettes, his money was gone.

This was the only evidence offered, and the magistrates refused informations

A group of British prisoners in Germany, of whom many are Irish. The figure marked X [far right] shows Piper Sweeney, 2nd Leinster Regiment. He has had twenty years’ service in the army, having served in South Africa, for which he holds three medals. He is a son of Mrs Ellen Sweeney, Corporation Buildings, Cork.

Mr Ed Sheehan. MA, proposed a resolution condemning recent actions in the courts against Gaelic Leaguers or speaking the Irish language. At this stage of the world’s history, when the rights of small nationalities were so much descanted upon, it was intolerable that the right of Irishmen to possess Irish names and speak their own language would be trampled upon and outraged in the name of law.

On Monday, Dr J. Claucy, MD, coroner for North Kerry, held an inquest on the body of a woman named Johanna Murphy, aged 46 years. From the evidence it appeared that the deceased was driving a common cart to her home at Ballyheigue, when she fell out of the cart, sustaining a fracture of the spine, to which she succumbed in a short time

This is how the men and women who would be involved in the looming rebellion spent this week 100 years ago — some deeply involved in its planning, others still oblivious.

‘Movement of Extremists’ reports of the Dublin Metropolitan Police, held in the National Archives of Ireland. See the original documents at nationalarchives.ie

Bureau of Military History witness statements made by participants in the Rising in the 1940s and 1950s: www.militaryarchives.ie