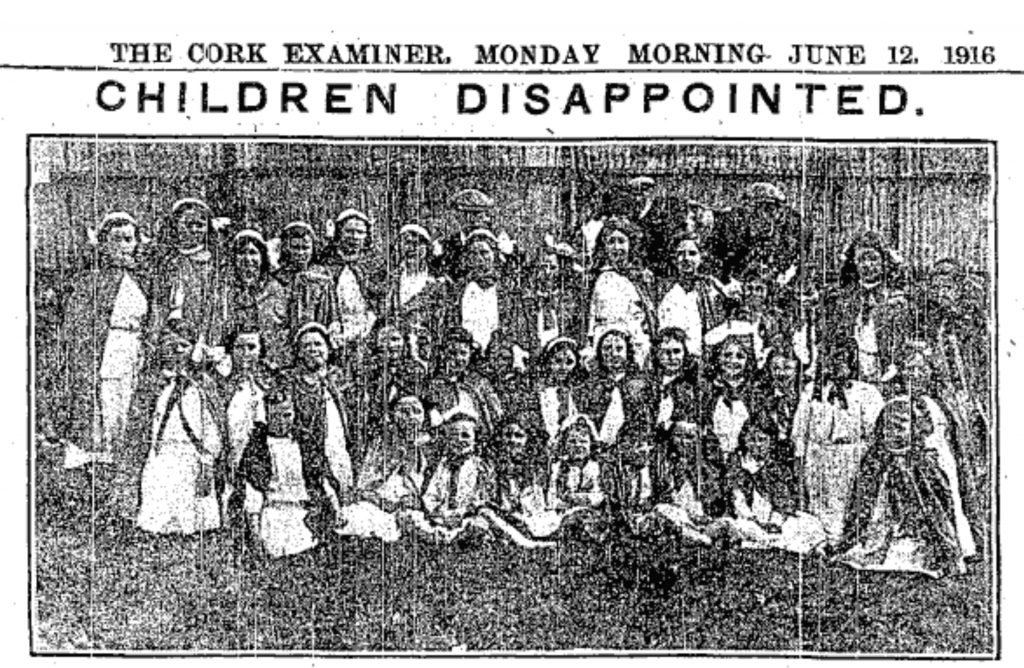 These little colleens were keenly disappointed at the Coachford Show, where the prohibition against Gaelic dances in competition was enforced. They had their hearts set on a day’s fun, but found that the shadow of Martial Law had eclipsed their few hours of gaiety. They wandered in groups around the show, and were about the most bored lot of little human beings that ever found ideals unrealised.

Yesterday the clerk of the weather was very kind to the many hundreds of people who had arranged to go for a day’s outing, and very many hundreds availed of the opportunity. The Catholic Young Men’s Society excursion to West Cork was, as anticipated, very popular, though not to the same extent as one would expect, considering the choice o f places offered. Those who traveled no this excursion spread themselves over a wide district from Baltimore to Glengariff. The facilities offered by the Cork, Bandon, and South Coast Railway certainly left nothing to be desired and those who traveled west came home thoroughly pleased.

To-day the same railway company give cheap tickets by the 9 and 12 o’clock train from Cork to all stations on the main line to Baltimore, and also on the Bantry branch with connection for Glengarrif. A special train will leave Albert street Terminus at 10:45 for Courtmacsherry and Kinsale.

Crosshaven  was favoured yesterday by a total of a couple of thousand citizens, who showed their pleasure at this delightful seaside resort being made available this summer to the excursionist.

The weather was unfavourable in the early part of the week, and few anglers went out. Still some good sport was had, the fish being plentiful. Peal are now showing in the Lakes. Mr A R Vincent landed three salmon in the Launch. Sir Morgan O’Connell caught four one day, weight 13, 12, 10 ½, 9 ½ lbs; and Mr G Ross one, 14lbs. Trout are rising well to the Mayfly, and baskets ranging from 1 ½ doz to 3 doz have been made.

Appeals for immediate and National Aid for the destitute families of some three hundred men slain during the insurrection, of fifteen executed by Courts-martial, of one hundred and thirty-four condemned to penal servitude, of two thousand six hundred and fifty deported without trial, and of about four hundred awaiting sentence by Courts-martial. In all, there have been to this date three thousand two hundred cases of imprisonment, now diminished by two hundred cases of released captives adjudged innocent, but not compensated for their imprisonment.

It adds to the urgency of the appeal that many of these have been deprived of their employment, and that some of the female relatives of the accused men have, though entirely distinct and without reproach, been heartlessly dismissed from their occupation, and despoiled of their livelihood.

Pending the hold (at a near date) of a Public Meeting to form a Committee for Cork of the Irish National Aid Association, the undersigned, acting on behalf of the local organising Provisional Committee, are prepared to accept subscriptions.

The Democratic National Convention opened today in an enormous Convention hall, accommodating 3,500 delegates, Press, and official on the main floor and the platform, and 7,500 spectators in the galleries. It was almost as crowded as Chicago was, where the accomodation is not so great, and where,the convention creates the same source of congestion that two did in Chicago. The electricity engenered by the Democratic and Progressive gatherings however, is missing at St. Louis, for the result is clear and there are few surprises as far as can be foreseen. The indications all point to a triumphant bid by Mr. Wilson as candidate for a second term as President, and Mr. Thomas R. Marshall Vice-President.

At a meeting of the Grand Orange Lodge of Ireland at Belfast to-day, a resolution was adopted directing that no demonstrations in connection with the 12th of July anniversary to be held this year, owing to the present state of affairs in Ireland.

The death of Mrs George Boole in London at the age of 84, removes another link in the chain connecting the present of University College with the past of the old Queen’s College. Perhaps one of the most illustrious names associated with the College since its foundation was that of the late George Boole, who for a number of years occupied a Professorial Chair and gave his unrivalled powers as a mathematician to the teaching of mathematics in its Art School. Some of his greatest productions were written whilst he held that Chair.

His widow, who has just died, was likewise a talented writer and psychologist, and it is a remarkable fact that her genius has descended to her daughters who, by the way, were all born in Cork. It is noteworthy that the late Professor Boole’s grandson has obtained the two highest prizes in mathematics of Cambridge University, and has recently been made Professor of Meteorology by the Government.

The funeral of the Bishop of Cork takes place to-day, and from the manifestations of grief that have already made themselves apparent throughout the entire country it is certain that the funeral ceremonial, which affords the clergy and laity the opportunity of paying a last tribute in respect to ‘ the distinguished prelate who has been called to his reward, will, in its character and dimensions, be worthy of the city in which the late Bishop laboured so diligently and unostentatiously for the welfare of all classes. The resolutions of sympathy which have been passed by elected public bodies and by various boards, committees, and associations, all bear testimony to the affectionate regard that was entertained for the late Bishop O’Callaghan, and to the universal recognition of the saintly qualities that distinguished his life.