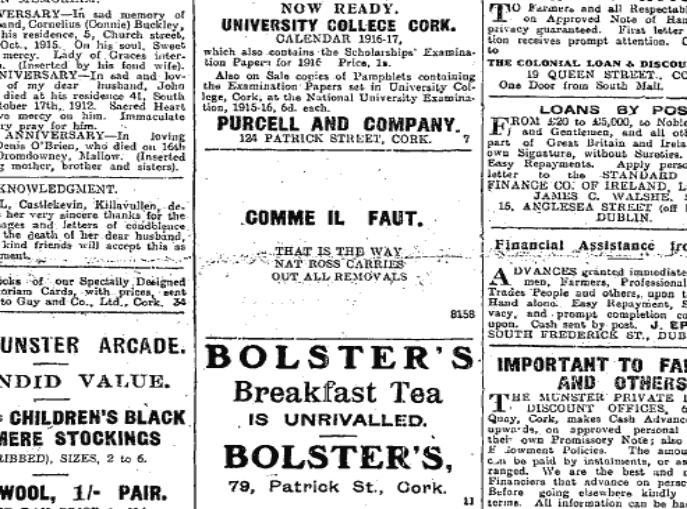 It turns outlast week’s ad was no mistake, but part of a saavy marketing move by Nat Ross removals. The sparseness of the ad is a sharp contrast to the busy newspaper page, and hints that last weeks notice was no mistake. It may be a century ago, but use of media was increasingly sophisticated during an era of mass consumption.

Nat Ross, as many will know, is still in operation today as one of the leading Removals companies in Ireland. “For the best part of 200 years Nat Ross removals has been busy moving company and personal belongings,” details the company history webpage. At the time of the Irish Rebellion, Nat Ross would have been known as “the premier furniture remover in the South of Ireland.”

Mr Francis Sheehy-Skeffington was a well-known figure in Dublin, and shortly before 8pm on April 25th he was walking from the city in the direction of his home… His way led over Portobello Bridge, and about 350 yards further on he would have passed the turning which leads to the main entrance of Portobello Barracks. It was conceded on all hands before us that Mr Sheehy-Skeffington had no connection with the rebellion; his views were opposed to the use of physical force; and it appears that he had been engaged that afternoon in making some public appeal to prevent looting and the like. 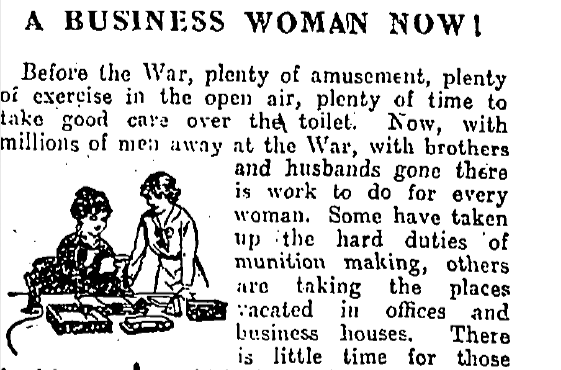 Ads appeal to the new working women in wartime: Before the War, plenty of amusement, plenty of exercise in the open air, plenty of time to take good care over the toilet. Now, with millions of men away at the War, with brothers and husbands gone there is work to do for every woman. Some have taken up the hard duties of munition making, others are taking the places vacated in offices and business houses… But there is time for a Pomeroy massage of the face just before retiring for the night!

The first party of Mr. Redmond’s motion stated a self-evident fact, viz: that the system of Government maintained in Ireland is inconsistent with the principles for which the Allies are fighting. The historical declaration of the Premier at the Guildhall, and since repeated in Parliament, where he stated that the sword would not be sheathed until the rights of small nationalities were recognised, was an admission  of the fundamental truth that small nationalities possess rights, and as the Premier has also admitted that Ireland is a nation, it follows that Ireland’s claims to consideration are at least as strong as those of Belgium.

The postmaster-General has been notified by the Post-office of the Union of South Africa that the mails for Rhodesia, Katanga, and British Chinde, dispatched from this country on August 26th last, were partially destroyed on the 13th by a fire which occurred on the train conveying the mails.

Sir – It is a well known fact by this time that thousands of Irish girls are leaving the peaceful hallowed homes of their native land in order to take up their abode in the great industrial centres of this country for the purpose of availing themselves of the unique opportunities of making money which have been created by the exigencies of the war.

….We have decided, therefore, with the wholehearted approval and blessing of his Grace the Archbishop. As far as this city is concerned, to meet the needs of what is an entirely new situation. Through the kindness and generosity of a practical sympathiser we have had placed at our disposal a magnificent hostel, situated within easy distance of the central stations of the city, and suitable in every particular for the specific purposes for which it is required, in which Irish girls on first arriving in Birmingham will find the help, comfort, and conveniences of a Catholic home.

The question of the release of Irish untried prisoners cannot be left as the Chief Secretary for Ireland would leave it, and with the National Party in opposition, much more of this matter should be heard until the Coalition is impelled to admit the injustice of holding untried men in custody indefinitely and with no immediate prospect of release.

The Collegiate Chapel of St. Finbarr, which will be attached to the Honan Hostel, adjoining University College, is rapidly approaching completion, and will be solemnly opened for service on the 5th prox…

In May of last year the foundation-stone of the building was blessed and laid by the late Most Rev. Dr. O’Callaghan, and since then the work of building has gone on steadily; each month showed a distinct advance. Almost from the very first it was apparent to even a very casual observer that the new chapel was intended to be a real work of art. And now that the outside work is finished, everybody will admit that the architect planned a very handsome structure in the Hiberno-Romanesque style which prevailed in this country nine centuries ago. 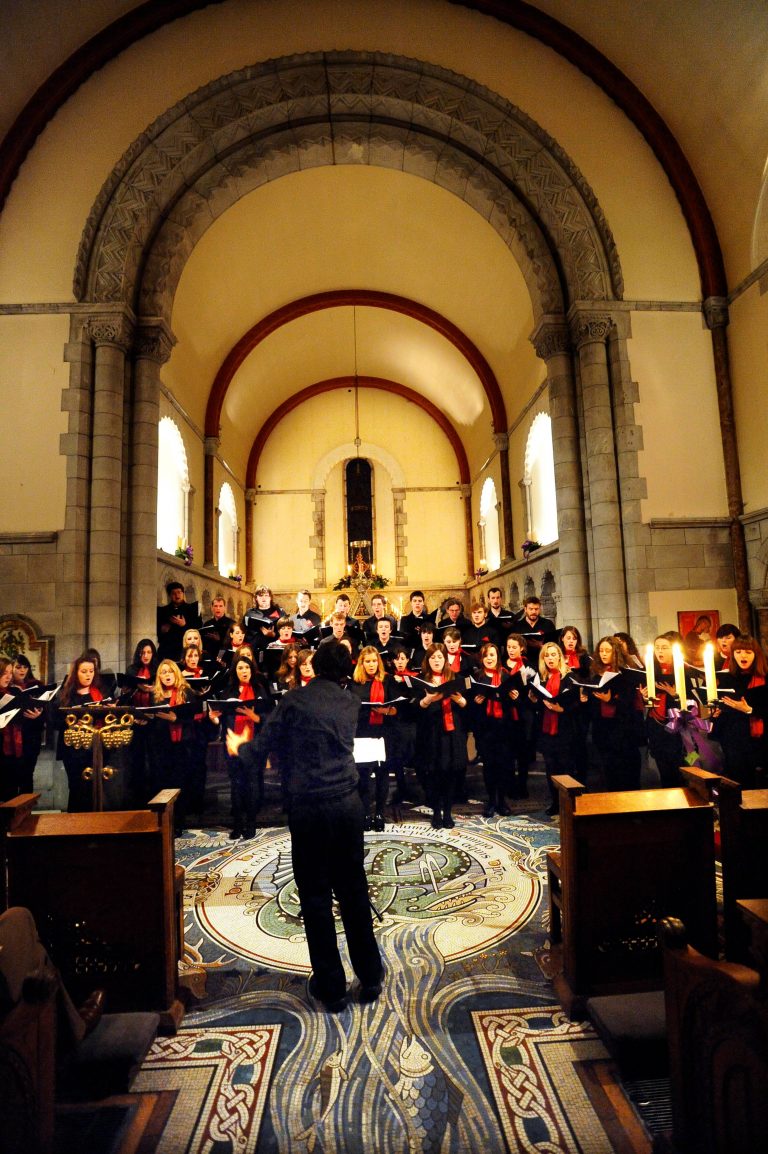