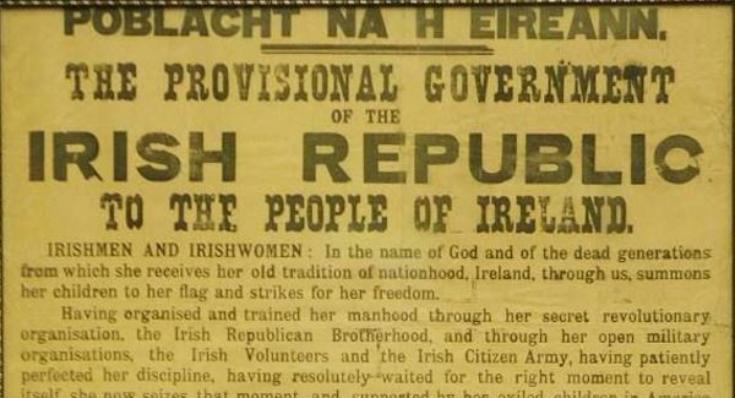 Irish Volunteers organiser and Brigade vice-commandant Tomás MacCurtain was in Dublin at a meeting in the organisation’s headquarters. Also in attendance: Volunteers chief-of-staff Eoin MacNeill, and other headquarters staff like JJ O’Connell, and IRB Military Council member Thomas MacDonagh who would be one of seven signatories to the Proclamation of the Republic, and Michael O’Hanrahan (who, like MacDonagh, was also executed after the Rising).

Ernest Blythe, Liam Mellows, and Alfred Monaghan were identified by RIC Inspector General Neville Chamberlain as the Volunteers’ most active organisers, although he believed the growth in membership was slowing since Ireland was excluded from military conscription in January.

John Devoy cashed a $10,000 cheque in a New York bank, converted it to pounds sterling and transmitted it to Ireland under the name ‘J. Digby’. Devoy was the Clan na Gael figure who was go-between in the deal to have German guns supplied to arm the Irish Volunteers in the Rising.

Dublin Metropolitan Police (DMP) detectives note the return of Thomas Clarke to his shop at Parnell Street, which has continued to be a daily meeting place of ‘extremists’ under surveillance during his absence following his accidental shooting in the arm.

Clarke also visited 12 D’Olier Street with fellow IRB Military Council member Seán MacDiarmada, and IRB Supreme Council member Diarmuid Lynch who knew about the imminent arrival of German guns but probably not about the Rising itself planned for Easter weekend. MacDiarmada later left Dublin by train, as did Seán T O’Kelly (future President of Ireland), and Dublin-based Piaras Béaslaí — another key figure in the Irish Volunteers and later a close aide of Michael Collins in his intelligence war against the British establishment.

Almost 6,000 Irish Volunteers marched in St Patrick’s Day ‘processions’ around the country. In Dublin, Eoin MacNeill took the salute at a review in College Green.

DMP detectives note an injury to Clarke’s arm, having believed over previous weeks that his prolonged absences from his shop were due to a severe cold.

A St Patrick’s Day concert at the Rotunda Rink at the top of Dublin’s Sackville Street (now O’Connell Street) was attended by Patrick Pearse, Éamon de Valera (Volunteers’ Dublin Brigade adjutant and 3rd Battalion commandant), JJ Walsh (Corkman whose tobacconists in Dublin was another key IRB meeting place), O’Hanrahan, and Clarke’s aide Seán McGarry — the man who had accidentally shot his friend. The Rotunda was the venue of the meeting in November 1913 at which the Irish Volunteers was formed by Eoin MacNeill, spurred on by Belfast-born Quaker and IRB figure Bulmer Hobson.

Irish Volunteers companies were instructed by headquarters to provide themselves with the national flag of “uncrowned gold harp on a plain green ground”. The order in The Irish Volunteer weekly newspaper said it should be borne on all formal parades such as those planned for Easter, explaining that, more so than the official Volunteer Flag, it “fully symbolises what the Irish Volunteers stand for and will gain a readier understanding and respect from Irishmen in general.”

In Berlin, Roger Casement sent John McGoey to Ireland with an instruction to tell Tom Clarke and, through him, Bulmer Hobson, to try to ‘call off’ the Rising. The message was not delivered, and it is unknown what happened to McGoey. Casement also dissuaded the German government from sending his Irish Brigade — made up of Irish members of the British Army held as prisoners of war by the Germans — to Ireland with the arms shipment. “I finished my letter as well as I could, emphasising the importance of my request for a submarine. If I could get that and land in Ireland before this damned ship and her guns arrive, I might stop the whole dreadful thing.”

* Witness statements collected by the Bureau of Military History, and the Military Archives timeline: www.militaryarchives.ie