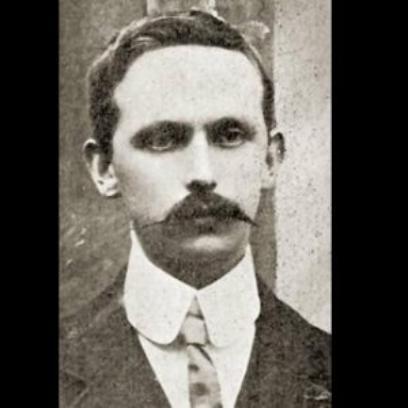 As British Authorities tried to get to grips with the outbreak of rebellion in Dublin the day before, command  of military forces was given to General William Lowe.

In an effort to dislodge the Irish Citizen Army, which had occupied St Stephen’s Green, military occupied the nearby Shelbourne Hotel and targeted the park with machine-gun fire. This forced a retreat by ICA to the Royal College of Surgeons.

The Nurses’ Home of South Dublin Union was barricaded by men under Éamonn Ceannt, one of the signatories of the Proclamation of the Irish Republic read aloud the day before by Patrick Pearse.

Six Irish Volunteers had died the day before, and another would die there on the second day of the Rising. But casualties during the week also included some of the 1,000 plus patients and staff in the facility.

Meanwhile, in the city centre, the British military focused on Trinity College Dublin, where an officer training corps was based. It moved its headquarters within the campus to the front of the college, giving a wide range for sniping at rebels moving around College Green and Dame St.

This cut off a route for communications and movement of the Volunteers and ICA, as well as acting as a deterrent to looting in the immediate vicinity of the University.

City Hall had been taken over the previous day by the ICA after the unsuccessful attempt to take over Dublin Castle at the start of the Rising 24 hours earlier. By Tuesday evening, martial law was declared in Ireland.

On Tuesday night, as he returned home to Rathmines after trying to deter civilians from looting, pacifist Francis Sheehy-Skeffington was arrested by troops under command of Captain J.C. Bowen-Colthurst from Cork.

That evening, a British gunboat had arrived and shots had been fired at Boland’s Mills, occupied by Irish Volunteers commanded by Éamon de Valera. 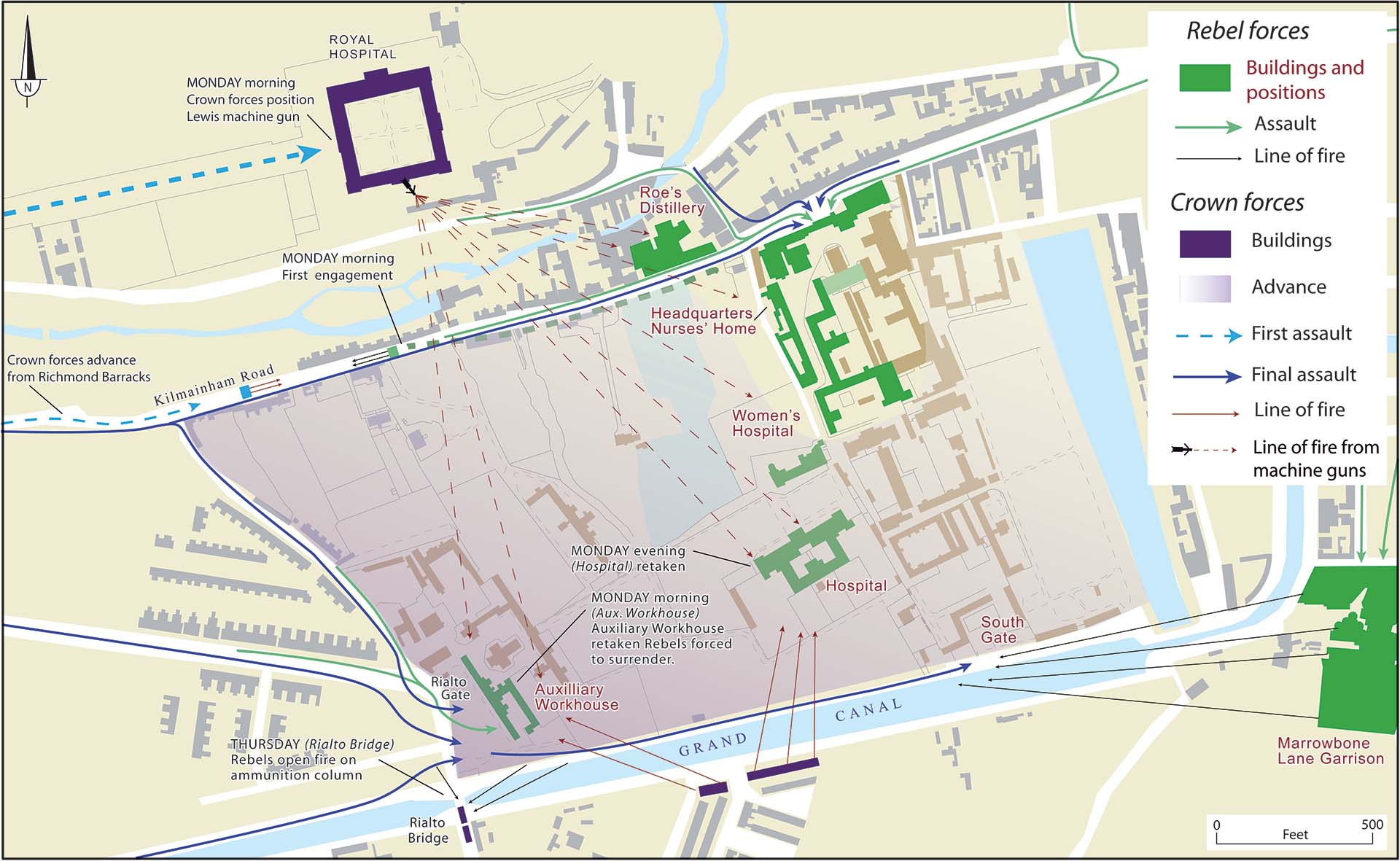 The South Dublin Union overlooked the anticipated line-of-march of British troops coming from Richmond Barracks and the Curragh army camp in Kildare. The walled fifty-acre complex accommodated Dublin’s poorest and most infirm residents in an assortment of hospitals, halls, wards, and work structures.

Despite the risk to those inmates, sixty Volunteers in Éamonn Ceannt’s 4th Battalion occupied the Union grounds at midday Monday. They barricaded gates and building doors, and burrowed internal tunnels to bypass corridors and connect firing positions.  Additional rebel garrisons were established inside strong industrial buildings at Jameson’s Distillery on Marrowbone Lane and Roe’s Distillery on Mount Brown.

On Monday afternoon, 24 April the Volunteers repulsed initial British attacks on the barricaded South Gate and front gate, though the rebels at Rialto Gate and the Auxiliary Workhouse surrendered after a brief fight. As a British machine gun on the roof of the Royal Hospital continually peppered the rebel positions, troops forced the front gate and entered the Union complex on Kilmainham Road, while additional soldiers moved in from Rialto gate onto the ‘2-3 hospital’. After close-quartered combat inside those structures, the rebels fell back to the adjoining Nurse’s Home and to the Women’s Hospital.

However, Tuesday morning, British commanders withdrew their troops from the Union grounds, allowing the rebels to again reoccupy their former positions. Outside the Union, the Jameson’s garrison held out, while the rebels evacuated Roe’s Distillery.

On Thursday, 27 April troops again entered the Union and fought their way through towards the three-story Nurse’s Home, braving fire from outnumbered rebels in the building blocks overlooking their advance.  After the Nurse’s Home defenders repulsed the assault, British troops in the adjoining building (the bakery) dug through the external wall separating the two structures.  Their entry into the Nurse’s Home sparked room-to-room fighting, with the rebels barely holding on.  However, frustrated British commanders again ordered their troops to retire from the Union on Thursday evening. Thereafter, they left the defiant garrison alone until Patrick Pearse ordered its surrender on Saturday afternoon. [Source: Atlas of the Irish Revolution, (CUP, 2017)]