Little is known about the true plans for the Easter Rising; for those who were involved it was a top secret affair. 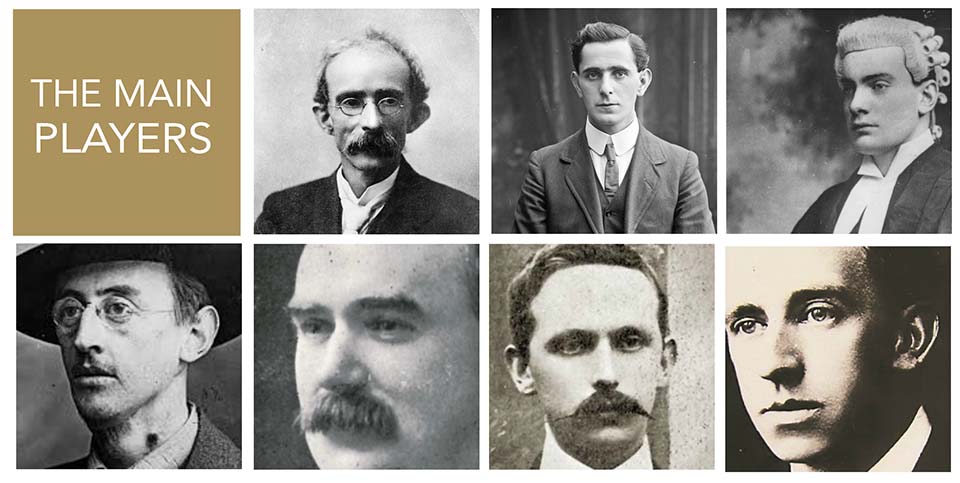 The Easter Rising was planned by seven men, mostly of the Irish Republican Brotherhood (IRB) who formed a “Military Council” after the outbreak of the First World War. These men are better known today as the seven signatories of the 1916 Proclamation. They hoped that the Rising would finally end British rule and lead to the the creation of an Ireland where all people could be free to accomplish their potential regardless of their wealth, class or religion. Of these men, three names stand out above the others…

Born on the Isle of Wight in 1857 Tom Clarke was a senior figure within the Irish Republican Brotherhood (IRB), a veteran of the dynamite campaign of the late nineteenth century, and the living embodiment of the Fenian tradition.

Visibly aged beyond his years, his return in 1906 to Ireland from New York (where he made his home following his release from a long, traumatic prison term eight years earlier) is recognised as marking a transformation in the fortunes of the physical force element within Irish nationalism.

Effectively dormant for fifteen years, the IRB was revitalised as a result of his efforts (which were ably assisted a number of lieutenants, notably Seán MacDiarmada, who was also executed in 1916).

It was Clarke who ensured that the IRB acquired a ‘controlling interest’ in the Irish Volunteers; it was Clarke who recruited Pádraig Pearse to the cause, and ensured that he would deliver the oration at the graveside of his Fenian mentor, O’Donovan Rossa; and it was Clarke who was responsible for the creation of the IRB’s ‘Military Council’, which was the principal vehicle for the planning of the Rising. He was executed on 3 May 1916.

Video: Dr Fearghal McGarry, explains how Thomas Clarke came to be one of the seven signatories.

If Clarke provided the connection between the Rising and previous Fenian insurrections, James Connolly provided a bridge with the wider labour movement. Born in Edinburgh in 1868 to Irish parents, and a former member of the British Army, he had gravitated towards radical politics and advocated a Marxist analysis of, and solution to, Ireland’s problems.

His pioneering study Labour in Irish History being but one example, albeit the most significant, of his prodigious literary output. Appalled at the sight of the workers of Europe embracing nationalism at the outset of the First World War, he soon found himself in a similar position and was compelled to forge alliances with Irish republicans with whom he had previously had frosty relations. Connolly was executed while sitting down on 12 May 1916. He was the last of the leaders to be executed.

Patrick Pearse is the most famous name associated with the Rising. It was he who read the Proclamation in front of the GPO on Easter Monday 1916, and he was one of the first of the leaders to be executed on 3 May 1916.

Pearse was born in Dublin in 1879 and provided a connection between the republican cause with the cause of the Irish language, and the broader cultural revival project, of which he was one of the most articulate advocates, and passionate activists. A devout Catholic, and pioneering educationalist, the third home rule crisis, and the apparent capitulation of the British government to the threat of force from unionists, had led him to move politically from advanced home ruler to physical force republican.

Born in Galway in 1881, prior to the Rising Ceannt was an employee of the Dublin Corporation. He was a co-­founder of the Irish Volunteers, partaking in the successful Howth gunrunning operation of 1914.

His involvement in republican activities was complemented by his interest in Irish culture, specifically Irish language and history, although he was also an accomplished uilleann piper. As the commander of the Fourth Battalion of Irish Volunteers during the Rising, he took possession of the South Dublin Union, precursor to the modern­day St. James’s Hospital. He was executed on 8 May 1916.

Born in 1884 in Leitrim, MacDiarmada emigrated to Glasgow in 1900, and from there to Belfast in 1902. A member of the Gaelic League, he was acquainted with Bulmer Hobson. He joined the Irish Republican Brotherhood in 1906 while still in Belfast, later transferring to Dublin in 1908 where he assumed managerial responsibility for the IRB newspaper Irish Freedom in 1910.

Although MacDiarmada was afflicted with polio in 1912, he was appointed as a member of the provisional committee of Irish Volunteers from 1913, and was subsequently drafted onto the military committee of the IRB in 1915. During the Rising MacDiarmada served in the GPO. He was executed on 12 May 1916.

A native of Tipperary, born in 1878, MacDonagh spent the early part of his career as a teacher. He moved to Dublin to study, and was the first teacher on the staff at St. Enda’s, the school he helped to found with Pádraig Pearse.

MacDonagh was well versed in literature, his enthusiasm and erudition earning him a position in the English department at University College Dublin. His play When the Dawn is Come was produced at the Abbey theatre.

He was appointed director of training for the Irish Volunteers in 1914, later joining the I.R.B. MacDonagh was appointed to the I.R.B. military committee in 1916. He was commander of the Second Battalion of Volunteers that occupied Jacob’s biscuit factory and surrounding houses during the Rising. He was executed on 3 May 1916.

Born 1887 in Dublin, son of a papal count, Plunkett was initially educated in England, though he returned to Ireland and graduated from UCD in 1909. After his graduation Plunkett spent two years travelling due to ill health, returning to Dublin in 1911. Plunkett shared MacDonagh’s enthusiasm for literature and was an editor of the Irish Review.

Along with MacDonagh and Edward Martyn, he helped to establish an Irish national theatre. He joined the Irish Volunteers in 1913, subsequently gaining membership of the IRB in 1914. Plunkett travelled to Germany to meet Roger Casement in 1915.

During the planning of the Rising, Plunkett was appointed Director of Military Operations, with overall responsibility for military strategy. Plunkett was one of those who were stationed in the GPO during the Rising. He married Grace Gifford while in Kilmainham Gaol following the surrender and was executed on 4 May 1916.