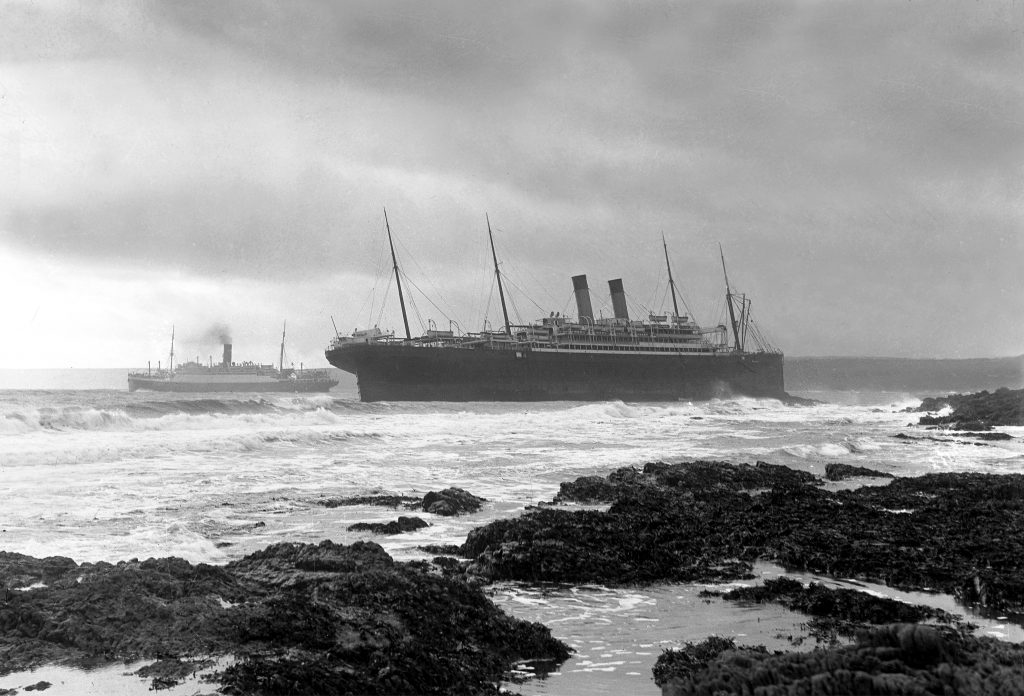 A shipwreck on the rocks off Roche’s Point in 1928, from the Irish Examiner Archives.

John Quirke, Post Office Lane, Blackrock, was summoned by George Futter, Inspector of Fisheries, for using a net for the capture of salmon or trout on May 20 between 6am on Saturday morning and 6am the following Monday. Quirke said he was out for seaweed.

Sergeant McHugo gave evidence of being near Blackrock Castle on the date in question. He saw Cremin with three men in a boat, and Quirke in another boat with three men. They made several hauls with a net. There were several boats out. Quirke and Cremin were the only two he could identify. He saw them through a telescope, and had no doubt of the defendant’s identity.

Coroner McCabe said that it was quite legal for the men to fish below an imaginary line from Blackrock Castle to Dunkettle station, provided they did not fish for salmon and trout. In the weekly close season, within certain places, nets could not be used, but these men were fishing outside the imaginary line. As to the net being fished, Was this a salmon net, and was it being fished for the purpose of catching salmon and trout? The police could not tell them what kind of a net these men used, and the onus of proof lay on the prosecution.

After consideration, judge Andrews said that in the very confused state of the law, as Mr. McCabe showed, the magistrates were unanimous in dismissing the cases. They would wish that the bylaws would be so made as to what portion of the river the fishermen were entitled to fish. They thought it would be only right that something should be done to make it clear at what time and what place the men were entitled to fish for herrings.

Deep and sincere sympathy was expressed in Midleton today amongst all classes with District-Inspector Patrick Murphy and Mrs. Murphy, on the sad and premature death of their only daughter, Miss Rita Murphy, whose demise occurred at her residence, The Rock, Midleton, from the effects of heat prostration. The little girl, who was only seven years of age, was overcome last Sunday whilst playing about in the vicinity of the strand at Youghal.

Sir,—I have been instructed by the Ard-Choiste of the, Gaelic League of London to forward you the following resolution passed unanimously at a special meeting held yesterday. A copy of the resolution has been forwarded to the Prime Minister and another to the Home Secretary: “In view of the statements which have been circulated that there is a feeling in Ireland that failure to inflict the capital penalty on Roger Casement would be unjust to those Irishmen who have been executed in connection with the Irish Rising, we, the governing body of the Gaelic League of London, speaking on behalf of an important branch of an influential Irish Organisation, to which Roger Casement has rendered valuable service, desire to record our conviction that these statements are utterly unfounded. We are confident that we are voicing the Sentimont of the Irish people in protesting against the addition of Roger Casement’s name to the tragic list of those executed since Easter Week.” Your obedient servant.

The annual excursion of the members of the Cork Divisions of the Ancient Order of Hibernians took place on Sunday under glorious weather conditions. The committee in charge of the arrangements charted the services of the Cork, Blackrock and Passage Railway Co.’s steamer Mabel, leaving St. Patrick’s Bridge at 10.30 o’clock, the steamer was well laden, over 400 persons being on board, which a large number had to be content to watch the departure of their friends on what proved to be one of the most pleasant of the many excursions run under the auspices of the AOH. Under the charming weather conditions the trip down the river to East Ferry, Aghada and Rostellan was truely delightful, while the perfect manner in which everything that would conduce to the enjoyment and pleasure of the excursionists was catered for, called forth the encomiums of the large number of well-pleased trippers.

The Irish Crisis debates continue as a draft settlement was issued tonight as a parliamentary paper. 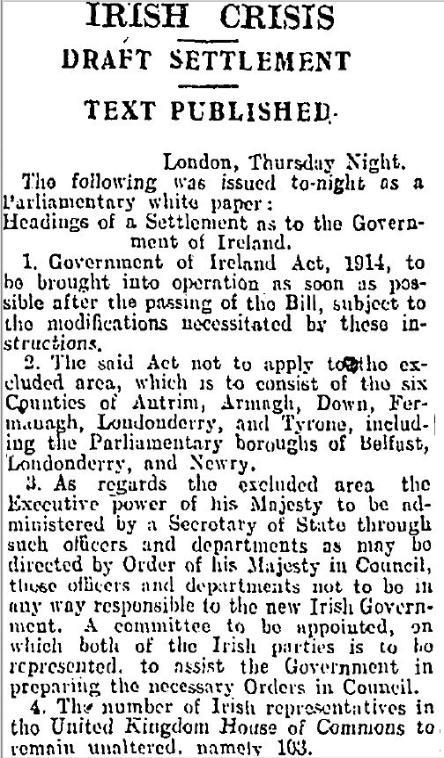 A tragic affair is reported from Castlerea. On Wednesday night the occupier of a licensed premises in a village in Co. Mayo heard someone knocking at the door, and receiving no reply to his inquiries as to who the  visitors were, is alleged to have fired a gunshot through the keyhole of the door. Three men were outside, and one fell mortally wounded. The man who discharged the gun has been arrested.

London Correspondence (through our private wire)

There was no development of any kind yesterday in regard to the Irish situation. Everybody is now waiting for the announcement of the Government’s plans for the future Government of Ireland during the war which Mr. Asquith is expected to make in Monday’s debate on Mr. Dillon’s motion. Speculation is rife as to what these plans may be, but no reliable information on the subject appears to have leaked out. The probability is that the Government have not yet been able to make up their minds on the matter, but another Cabinet Council is expected to be held on Monday, at which some decision must be taken, if this has not already been done. It is generally greed that the Government are in a pretty hopeless plight in the matter, but very few have any sympathy with them on account of their shameless breach of faith over the settlement proposals…

Six days are the temperature perceptibly rose, and for several days now we have been having quite brilliant weather. It came yesterday, together with the usual photo pictures of London school children  paddling and sailing boats in the artificial waters in the parks. The hot weather has in fact synchronised with the beginning of the L.C.C elementary schools’ summer holidays, and every one is glad that the weather has improved in time for the children. At this season in ordinary times the railway termini would be busy and bustling all day long with families and their luggage, all off to the seaside. Now with no cheap trains, with food prices half again as they used to be, and with so many breadwinners taken away, holidays are for the majority of people forbidden. The seaside places which exist by the aid of the summer visitors are in the direst straits.