Messrs Denis O’Mahony, Town Commissioner, and Edward Sheehan, M.A., were co-opted as members of the Executive, the Chairman remarking that the former had given very great help in connection with the establishment of the traditional singing class at the Municipal School of Music....A deputation was appointed to wait on the Lord Mayor with regard to the celebrations usual to St Patrick’s Day.

Liam de Róiste was a prominent figure in the Irish Volunteers, a close associate of the Cork Brigade commanders Tomás MacCurtain and Terence MacSwiney, and would become a TD for Cork City in the first Dáil at the 1918 general election.

Mr. John Murphy, Chairman, presided at the half-yearly meeting of the Hibernian Bank.

The report showed that...the net profits for the half-year amounted to £23,618... Their gross profits were substantially better than those for the corresponding half of 1914... The past year had, he was glad to say, been a prosperous one for the agricultural and farming interests in Ireland... The directors viewed with confidence the present position and prospects of the bank (applause)... it was decided to pay a dividend at the rate of 6 per cent for the half-year.

Dr. Griffin in in his monthly report stated that the male patient who escaped on the 28th ult. was, on information supplied by the police, recaptured by the attendants at a farm at Lisheen, some 16 or 17 miles from here, where he had been working from the morning following his escape. 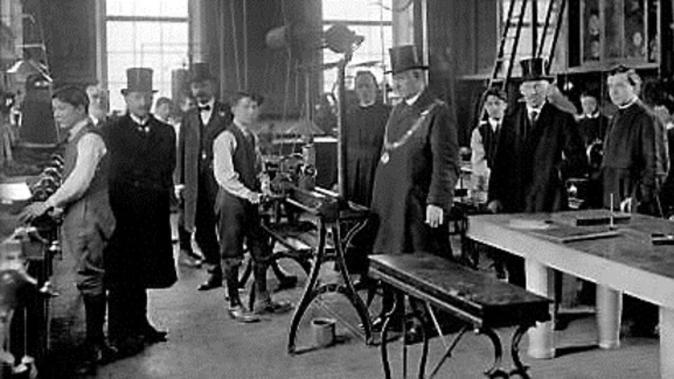 Recently-elected Lord Mayor of Cork, Thomas C. Butterfield was impressed by the work of these boys in the metal shop at the North Monastery schools on the city’s northside.

Irish Parliamentary Party leader John Redmond told an army recruiting meeting in Galway an impression was being created that Ireland’s exclusion from conscription meant the country was shirking her duty.

Such an impression would be a false one, a cruel one, and would be a deadly injury to the future interests of Ireland. Since the commencement of the war, this little island had put a huge Irish army in the field. Up to January 8 last lreland had sent 86,277 men into the army and into the navy 3,466, making a total of 89,743...

He honestly believed that if this war ended in the defeat of the Allies THERE WAS IMMINENT DANGER THAT EVERY TENANT FARMER IN IRELAND WOULD BE ROBBED BY THE PRUSSIANS of his ownership of the soil...The position of the tenant farmer who would not fight for the land for his children, and who expected the people of the towns to do the fighting for him was a contemptible position.

The Limerick Operatic Society gave an excellent production of Gilbert and Sullivan’s charming opera, Patience. The public gave it their generous support, two reasons conducing to its popularity — the merits of the performers, and the fact the receipts were devoted to supplementing the Fund for Comforts for the Munster Fusiliers.

More details of how key figures in the planning of the Rising, and those who would take part in it, spent this week 100 years ago.

Files from the Dublin Metropolitan Police ‘Movement of Extremists’ files, on which some of these details based, are uploaded daily to the National Archives of Ireland website: www.nationalarchives.ie (@NARIreland on Twitter).

Original documents from the period, including some used in this diary, can be seen in the Military Archives timeline: www.militaryarchives.ie. See @dfarchives on Twitter.