Sealed tenders will be received at the undermentioned Office until 12 o’clock noon on WEDNESDAY. 19th JULY 1916, for the supply of MEAT to Cork, Ballincollig, Kinsale, and Charles Fort, Tralee, Ballybunion, Bandon, Valentia Island, Crosshaven, Aghada, Queenstown, Bere Island, Youghal, for a period of THREE MONTHS from 1st August, 1916.

Forms of Tender, Conditions of Contract, and any further particulars may be obtained at this office by letter addressed to Officer Commanding Army Service Corps, Headquarters, Queenstown, or in person between the hours of 10 and 4 o’clock.

Tenders of the Printed Forms must be properly filled up, signed and dated, and no Tender will be noticed unless delivered at the Officer of the undermentioned by 12 o’clock, noon, on the above-mentioned date under closed envelope marked “Tender for Meat” on the outside.

An interesting, and Imperial, perspective on the Home Rule settlement under discussion as an interim solution in 1916.

Mr. Asquith made his promised statement in the House of Commons yesterday on the Home Rule negotiations, and after recapitulating the facts which led up to the present situation…

“It was not to invite the assent of various parties and sections of opinion in Ireland to proposals put forward on behalf of the Govern. It was on the assumption that the Government of Ireland Bill was on the Statute Book to see whether under existing conditions they might not be disposed by a process of give and take to come to an agreed settlement.”

…”The Irish House of Commons will be constituted by the transference to the Irish Parliament of the 78 members now sitting for 25 counties. The total Irish representation is 103, and there are 25 members sitting for the six excluded Ulster counties. Of the foregoing 78 members, 76 are Nationalists and two are Unionists – Sir Edward Carson and Mr. J.H. Campbell… These 78 members will retain their seats at Westminster and the 25 members representing the excluded counties will also continue to sit at St. Stephens. The interests of the Nationalist of Ulster consequently will not suffer in the Imperial Parliament.”

A delegation of the Dublin Municipality, which has come to Paris to study the methods of reconstruction employed in the invaded towns, was received today by the Committe of hte Exposition de la Cite Reconstituco which is now being held at the Tuilleries. Replying to a sepech welcoming the Irish delegration, the Lord Mayor expressed his confidence that two countries would be united in the great work of humanity by links of blood, traditions, and labour.

The usual monthly meeting of the above will be held in the Committee Room, Cork City Hall, on tomorrow night at 8:00. Full Attendance requested. 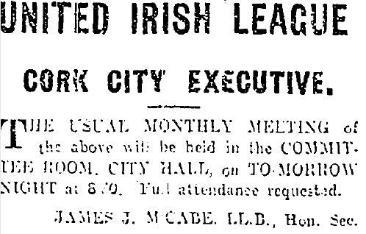 At Wexford Assizes, to-day, a soldier’s wife named Mary Sullivan, of Gorey, was charged with the manslaughter of James Neill.

Evidence, was given that during the Sinn Fein rebellion in Enniscorthy the accused called Neill a Sinn Feiner, and throw a stone at him. The deceased hit her and knocked the woman down. Neill and the accused boxed a couple of rounds, and they both fell. When Neill got up there were scratches on his face, but whether from the fall or the woman’s nails witnesses were unable to say. Medical evidence was given that Neill died from tetanus.

The accused, who pleaded not guilty, said Neill knocked her teeth out, and when she was on the ground kicked her.

The accused was found not guilty and discharged.

Thirty-eight out of the several hundred prisoners were released from Frongoch internment camp arrived in the city yesterday. They were mostly from the county, the greater number of them belonging to Macroom and the neighbouring district. They left, for their respective homes in the afternoon.

During the evening it was current that others were arriving by the train getting into Cork at 8.35, and a number of sympathisers,headed by a couple of pipers playing national airs, went to the Glaninire station to meet them. One released Cork city man did travel by the train and was welcomed by those assembled to meet him. The party then proceeded to the National Monument on the Grand Parade. It seemed as if they wore about to hold a meeting, but whether this was so or not the police interfered and prevented any such taking place if intended.

The party scattered into groups, and disappeared on the side streets, and the crowd, mostly composed of young people and women… also dispersed. This crowd was largely attracted by curiosity, and took no part in the proceedings beyond watching the movement of those concerned in them. No damage of any kind was done last night, but on Thursday night a pane of glass was broken in the recruiting offices on Patrick St. 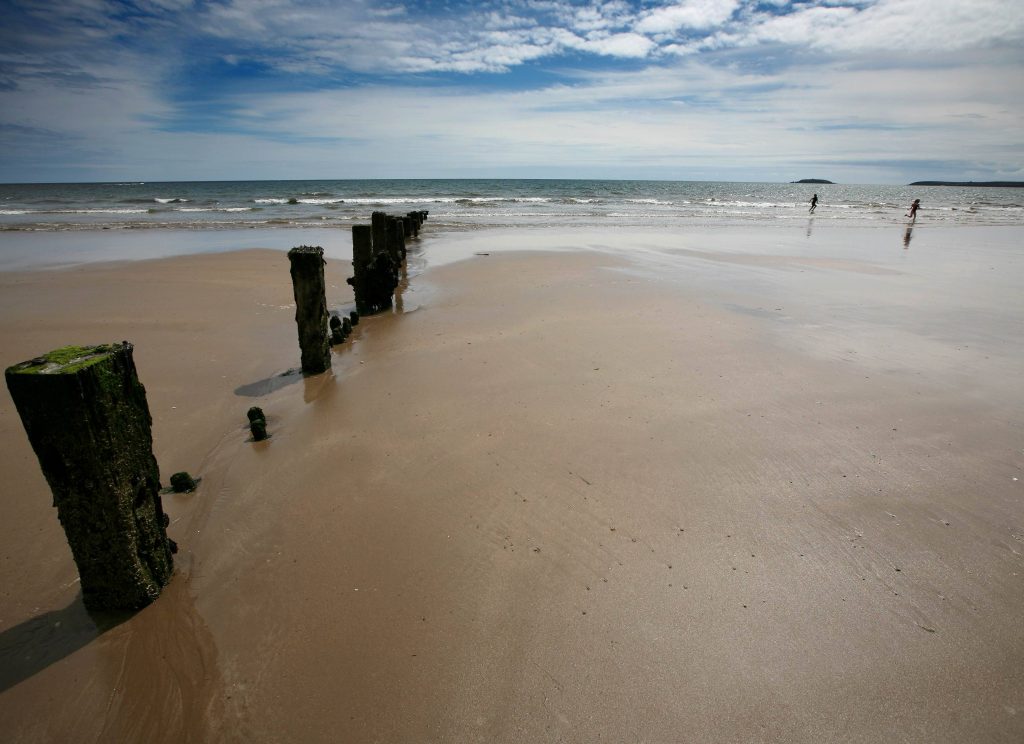 Sir – It was with surprise and horror that I read Mr. Goggin’s letter “re mixed bathing in Youghal”. He makes out several points in favour of it. Firstly, that it is the custom in England and on the Continent. That is no reason why we should adopt it here. Secondly, the security to bathers. Well there are always more men hanging around the women’s bathing place than is at all desirable. Thirdly, that men may teach ladies to swim. Well the ladies can and do help each other to learn swimming, and with regard to the ladies ‘bobbing up and down’ as Mr. Goggin terms it, he alludes only to the minority. I wish to point out in conclusion, that I have always been a constant visitor at Youghal. But if Mr. Goggin’s suggestion is adopted, my friends and I must frequent some other seaside resort.