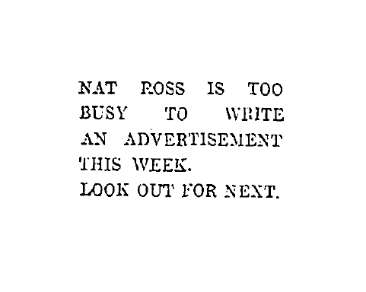 It happens occasionally, even today. An advertiser will pay for a spot, and never supply an image or copy. Was this intentional? The blank advertisement added a comedic effect on the front page of the Cork Examiner on this day in 1916.

Nat Ross, as many will know, is still in operation today as one of the leading Removals companies in Ireland. “For the best part of 200 years Nat Ross removals has been busy moving company and personal belongings,” details the company history webpage. At the time of the Irish Rebellion, Nat Ross would have been known as “the premier furniture remover in the South of Ireland.”

WWI Reconnaissance was high tech – This British observation balloon went up on the lookout for enemy movements. A scene taken at the front in France. 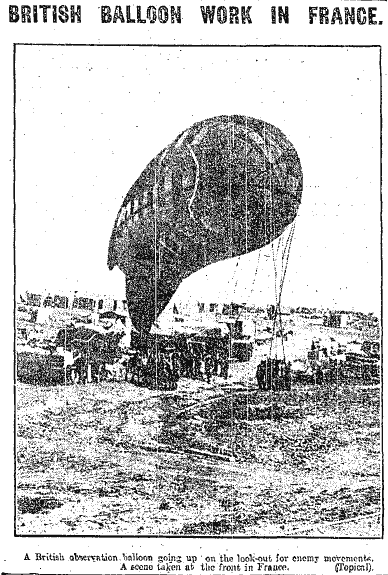 The body of a man has been washed ashore at Ballincourty, inside Dungarvan harbour. He appeared to have been very respectable, the clothes being very fine, and a fur coat covered his vest. He wore a gold ring, and had a gold watch. The coastguards and police have taken charge and are making inquiries.

The constituency of East Cork has a proud record of fidelity to the irish Leader and the National Party fighting Irish claims in the British House of Commons, and there also reserving Irish rights. In days of comparative calm and quiet this steadfast support of its people was encouraging; and in times of stress and distracting emergencies the rally of such old, saunch and trusty friends is very cheering and undoubtedly efficacious.

“An attractive and lifelike drawing of Sir Roger Casement is on view at Messrs. Carrolls’ Furniture Warerooms, 24, Bachelor’s Walk. Splendid reproductions of the original, printed on Thick Art Paper, 10 inches by 8, are now ready for sale at the undermentioend address. This portrait is a real work of Art, and forms a unique Souvenir…”

The Post Office announces that on and after Monday next every person taking out a money order payable in Denmark, Norway, Sweden, Holland, or Switzerland, to a person other than a prisoner of war, will be required, before the order is issued, to sign a declaration that he remittance in question is not intended either directly or indirectly for an enemy subject…

A meeting convened by the Cork Young Ireland Society was held yesterday at 13 Great George’s street, to make arrangements for the successful carrying out of the coming Manchester martyrs’ anniversary.