Never have the Gaels of the leading counties clashed the ash in a more worthy cause than that of the celebration of the foundation in the city of Sarsfield of the far-famed teaching Order of the Christian Bros. Having had reason to regard the great services of the Christian Bros. as priceless in the education of Irish youth, the Gaels of the leading hurling centres esteemed it a privilege to be in a position to acknowledge in a practical way the work of the famous teaching Brotherhood, and, it might be added, that rarely did the exponents of the national pastimes enter into the fray with a keener feeling of rivalry, and, to the credit, of the public be it said, the support accorded to the tournament was such, as the occasion demanded. Even that erratic celebrity, the Clerk of the Weather joined in the celebration, with the result that though an ominous sky prevailed, the clerk sat tight on the floodgates. The programme opened with an interesting tussle between the Redmonds (Cork) and Clare. Both sides fought out the issue without conceding an inch either way. It was a particularly hard, slogging game from start to finish of which the old popular Reds hid the better, but not without a few casualties.

This forenoon strong pickets of soldiers took up positions along the southern and northern quays, of Dublin. At the same time a considerable body of about sixty or seventy soldiers marched through the principal streets of the city, including O’Connell street. Pickets were also stationed in Glasnevin and other districts. All were fully armed. From nine o’clock last night a small section of young boys, principally of the poorer classes, formed together and marched through several of the thorough fares in the vicinity of Westmoreland street, carrying sticks over their shoulders, and indulged in singing and cheering during their progress.

At first little attention was paid to them, but after several excursions through the streets the procession apparently assumed larger proportions, and it is stated a flag of the Irish Republic was unfurled, and carried in the “ranks.” As it passed again through Westmoreland street the procession was met by some members of the police, who attempted to disperse the crowd.

A scuffle ensued in which a young man and a boy were arrested, and while they were being conveyed to the Police Station a second young man, it is alleged, hurled a stick at the Constables. Two members of the military mounted police who were on duty at the time of the occurrence came forward and arrested the man, who with the other prisoners was taken to the College Station, Brunswick street, followed by a crowd of people. They were detained pending the result of the police authorities communication with the military.

The Gaelic League of London arranged for a Requiem Mass which was aid today at the Church of Corpus Christi, Maiden Lane, for the repose of the souls of the rebels who fell during the recent Irish Rising. The celebrant was the Rev. Robert Kane, SJ of Dublin, and amongst a large congregation were Mrs. and Miss Pearse, mother and sister of the Brothers Pearse who were executed for their participation in the rising.

The news that the Austrian duchy of Bukovina is entirely in Russian hands is satisfactory, as indeed is all the news that has come from the Eastern front since the great forward sweep commenced. It is not to be expected that the rate that has hitherto been maintained can be kept up, if only for the reason that the captured territory must be held, and that requires large numbers of men.

Exam Results for the men and woman graduates at the National University of Ireland – University College Cork announced this week in the Cork Examiner: 28 graduands in Engineering, 5 graduands in Medicine, 52 in Chemistry and Physics, as well as 4 who passed the First Dental Examination.

Dublin police today arrested three city printers named Curtis, residing at Temple Lane West, Capel Street, and Latchford of Temple Bar. They were taken to College Station, Bruinswick street and charged under the Defence of the Realm Act. One of the charges was that of “being in possession of documents entitled #Last and Inspiring Address of Thomas MacDonagh’ which contained language likely to cause disaffection to His Majesty’s subjects”. There was a further charge of having in this month printed copies of the same document. In the afternoon the three men were brought before the Chief Divisional Magistrate, and remanded on bail.

Sir Roger Casement was sentenced to death yesterday on the charge of high treason. 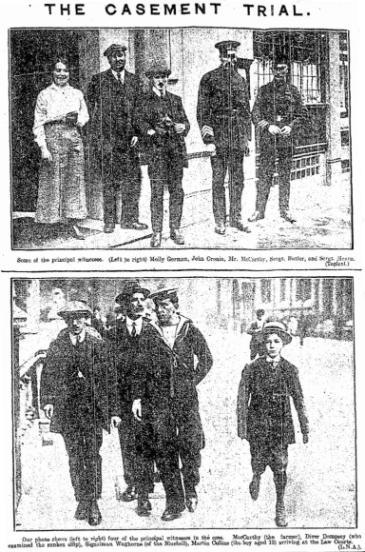 In The Council Chamber, City Hall, yesterday-afternoon a public meeting was held for the purpose of forming a Cork Branch Irish National Aid Association and of collecting funds in aid of the dependents of those Irishmen who were executed or are now in prison as a result of the recent insurrection. The meeting, which war convened by the Lord Mayor Councilor T. C. Butterfield and the Chairman of the Cork County Council was presided over by the Lord Mayor. Attendees names were printed it full in the paper, running to three columns.

“We do not want Martial Law indefinitely in Ireland, but Home Rule must come. On that the people of Ireland are determined.” -Cork Examiner Editorial

I hear that a business man in British Columbia is doing quite a large business in mailed orders for salmon delivered by parcels post in Great Britain. The price of the salmon per 7lb parcel is said to be ninepence per lb. It is, of course, hard frozen. One result of the war will be to increase definitely the supply of tinned and frozen fish from Canada to the mother country. The Scandinavian countries have, it seems, been drawn upon to a considerable extent by Germany. The enemy, owing to the deficiency in meat supply, seems to have been very eager to purchase fish, and is still doing so on a large scale or small scale according as circumstances offer…

It should be added that as regards Norway we are in the best position today thanks to the enterprise of Mr Runciman, the President of the Board of Trade. Last year the Germans bought up nearly the whole of Norwegian fish supply, but this year’s has been purchased by British agents.