The arrival in Dublin of General Sir John Maxwell on the Friday of the Rising sparked what would become a turning point not just in the rebellion, but in the Irish revolution that would continue for the next six years.

His decisions regarding executions, and to arrest Irish Volunteers and other activists in the following weeks, would be the actions on which public opinion would quickly turn in favour of those behind the unsuccessful rebellion.

It was the beginning of the end for the main garrison of the rebels in the GPO, with fires and shell damage forcing them to consider an evacuation.

In the early hours, other landmark buildings on Sackville Street such as the Imperial Hotel and Clery’s department store were destroyed by fire.

As President of the Irish Republic and commander of the Army of the Irish Republic, Patrick Pearse issued a statement acknowledging the difficult situation, but paying “homage to the gallantry of the soldiers of Irish freedom who have during the past four days been writing with fire and steel the most glorious chapter in the later history of Ireland.”

“Let me, who have led them into this, speak, in my own, and in my fellow-commanders’ names, and in the name of Ireland, present and to come, their praise, and ask them who come after them to remember them.

The Fingal Battalion of the Irish Volunteers in north Dublin began an attack on the Royal Irish Constabulary (RIC) barracks at Ashbourne, Co Meath. After several hours of battle, including the arrival of police reinforcements after the barracks surrendered, eight RIC members and two Volunteers were dead. The encounter brought battalion commandant Thomas Ashe to prominence but he would die on hunger strike in jail in 1917. Richard Mulcahy, the other Volunteer leader at the Battle of Ashbourne, would later become chief-of-staff of the IRA and succeeded Michael Collins as Free State Army commander-in-chief.

The GPO needing to be evacuated, an advance party tried to lead the way towards Moore Street. In the process, prominent Irish Volunteers officer Michael Joseph O’Rahilly was wounded and died alone in Moore Lane. The main garrison later escaped the GPO through back streets, the leaders occupying houses in Moore Street.

The next day would see the decision taken by Pearse and the other members of the Provisional Government to bring an end to the ongoing deaths of civilians, and to issue the formal surrender that ended the Rising. 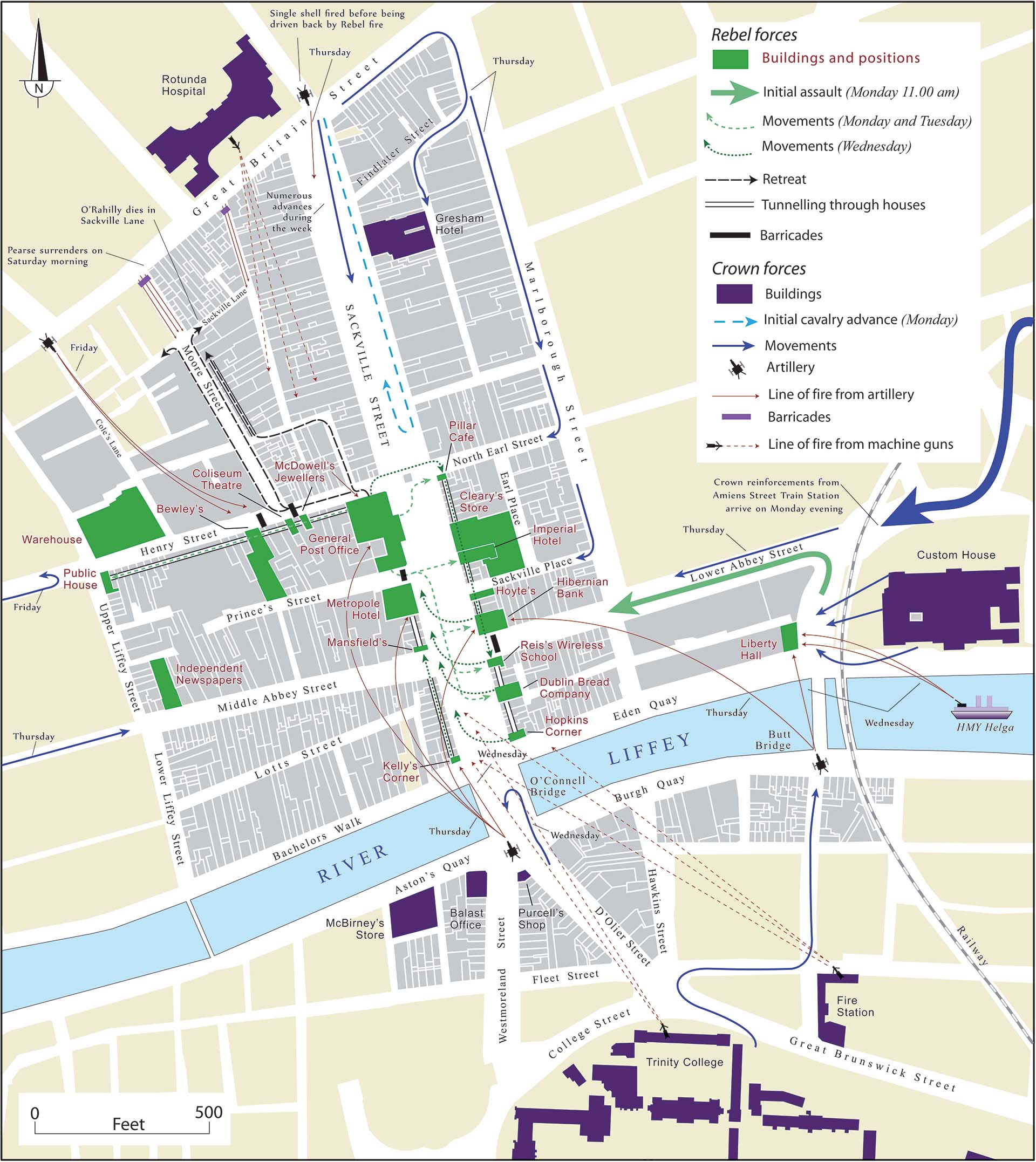 While the GPO symbolized the Easter Rising, the building was only one of many held by the rebels in the larger Sackville Street (O’Connell Street) area. Numerous rebel outposts commanded the approaches into Lower Sackville Street, which were connected by a series of tunnels dug through neighbouring buildings. For the first three days of fighting the GPO escaped direct attack, and was only subjected to British sniper fire and an ill-conceived British cavalry charge on Monday, 24 April.

Some of the fiercest fighting occurred on the east side of Lower Sackville Street, as small garrisons tried to hold back British troops surging from Marlborough Street and Lower Abbey Street. Kelly’s Corner and Hopkin’s Corner were also subjected to fierce fusillades from British forces operating out of Trinity College across the River Liffey.

A turning point occurred on Thursday, 27 April when British field artillery pieces (18 pounders) positioned on Sackville Street and Butt Bridge shelled rebel positions, setting many buildings ablaze. By nightfall, the rebels had been burned out of the east side of Sackville Street, with those fighters either captured or forced to retreat to the GPO.  On early Friday, artillery shells fell on the GPO and set it alight. As the building began to disintegrate on Friday evening, the garrison retreated under fire across Henry Street, and burrowed into small shops and tenements on Moore Street and Moore Lane. Michael O’Rahilly (‘The O’Rahilly’) led a breakout attempt towards Great Britain (Parnell) Street, but his force was cut down on Moore Street by heavy British fire.

The rebels found themselves trapped in a small area, surrounded by British troops and facing renewed shelling. Fearing the destruction of his force and the infliction of heavy casualties on the adjacent civilian population, Patrick Pearse ordered a surrender late on Saturday morning, 29 April. The rebellion was over.