The Rising in Enniscorthy

The spirit of 1798 was the inspiration for the Rising in Enniscorthy, which, despite the lack of arms proved to be one of the more remarkable episodes of the week, writes Conor McNamara 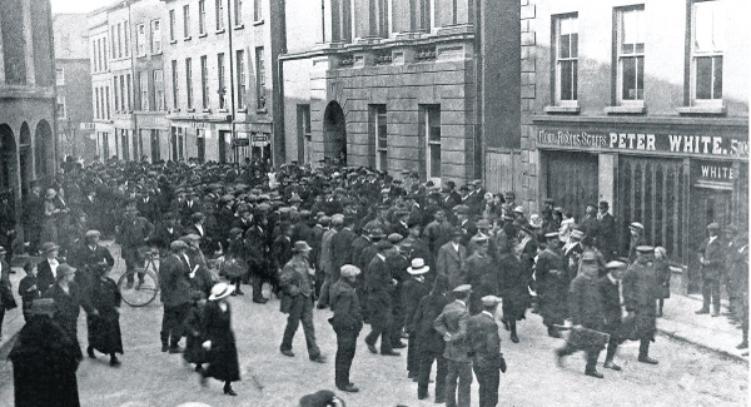 Irish Volunteers leaders being arrested outside the Athenaeum in Enniscorthy on May 1, 1916. Picture: Alfred E Crane Collection (Copyright Ibar Carty)

IN WEXFORD in 1916, the Volunteers had seven branches with 325 members, poorly armed with 95 rifles, 47 shot- guns, 34 revolvers, bayonets and ammunition.

Despite their lack of arms, the Rising in Enniscorthy was among one of the more remarkable episodes of the week.

The town, infused with the spirit of 1798 given its proximity to Vinegar Hill, had a strong tradition of nationalist activity, with the Gaelic League, the GAA, the IRB, and the Irish Volunteers all active and with overlapping membership.

The local Volunteer leaders were non-plussed by the countermanding order hand-delivered by Min Ryan from Tomcoole. After an anxious conference which included Ginger O’Connell, Min Ryan, Fr Pat Murphy and Dr Dundon, the decision was taken to respect Mac- Neill’s orders. The more hardline activists demurred. (Min Ryan was in a relationship with Seán Mac- Diarmada, who was executed for his leading role in the Rising, and she married future Army chief-of- staff Richard Mulcahy in 1919).

The IRB leaders had sent Paul Galligan to the town earlier in the year to beef up the organisation and training, and he now set off for Dublin to establish contact with the leadership.

He was instructed by James Connolly to head back to Enniscorthy, seize the town and prevent British reinforcements reaching Dublin by train from Rosslare. After an arduous and circuitous bicycle trip, Gal- ligan arrived back in the town and authorised the Volunteers to rise.

They seized Enniscorthy at 4am on Thursday, April 27.

Thomas Doyle recalled that Keegan’s house in Irish Street was the first headquarters of the Irish Repub-ic: “With about 90 men we marched over to the Athenaeum, took it over, hoisted the Republican flag over it, fired a salute and made it our headquarters.”

Thomas Doyle remembered: “At 8 o’clock that morning when the people were on their way to work, the Volunteers told them that there would be no work that day as the Republic was proclaimed. They all went home again.

“That morning some of the banks were taken over by Captain Etchingham. We placed guards in them and told the managers to lock up everything and, if anything went wrong, they were to report to us.”

The Volunteers pasted notices, requiring anyone with firearms to hand them in be- fore noon. Doyle was ordered to call on houses which allegedly had arms: “if anyone had anything against you, they would send in a report that you had arms in your house and get you raided- and send us on a fool’s errand. It was not a very nice job.”

Anyone leaving town had to apply to headquarters for permission to leave. A recruiting office was also opened in the old police barracks.

Initially hardly anyone enlisted: “then a rumour went out that, if they did not join, they would be conscripted. After that, we got all the recruits we could arm.”

On Thursday a proclamation was issued, imposing a 10pm curfew and warning that anyone caught looting would be shot on sight. The leadership was very proud of the fact that they success- fully closed the pubs for four days.

The first armoured train used in Ireland, fitted with a fifteen–pounder gun, was nicknamed ‘Enniscorthy Emily’.

The government enquiry was later told:

“Some of the rebels had taken up positions on Vinegar Hill, which overlooks the town of Enniscorthy. A council of war was held, but the deliberations were brought to an abrupt conclusion by a well-planted shell which the gunner of ‘Enniscorthy Emily’ discharged at the hill.

“The shell, which, it is stated, was a blank one, landed plump amongst the rebels, who hoisted white flags on the hill, while two hundred of the insurgents bolted for the hills. Many of the escaping rebels were captured. The others laid down their arms unconditionally.”

The rebels voluntarily disbanded once the surrender in Dublin was personally verified by Captains Doyle and Etchingham, who received safe conduct to see Pearse in Kilmainham jail. 375 alleged Sinn Féiners were arrested with 319 were sent to Dublin. The police seized 46 rifles, 66 shot-guns, 8 pistols, 6 revolvers, 1 bomb, 21 stone of blasting powder, 667 rounds of sporting ammunition, 4,067 rounds of rifle and revolver ammunition, as well as gelignite and other explosives.

Events in Enniscorthy (Extract from the Royal Commission of Enquiry)

“The Enniscorthy rebels waited for information from their leaders that the city of Dublin had been captured, and when this information came to hand the local re- bels immediately gave orders to their forces to begin action.

“They first seized the business houses of the town and also the railway station, and held up a train which was on its way from Wexford with 300 workmen for Kynoch’s [munitions] factory [Arklow]. The engine was detached from the train, and the men were permitted to walk back to Wexford by the railway line. The rebels then debated amongst them- selves the advisability of blowing up the fine bridge at Enniscorthy, but fortunately abandoned the idea. They then attempted to blow up the bridge of Scarawalsh, which crosses the River Slaney on the main road be- tween Wexford and Enniscorthy. Before doing so they warned the old and respected blacksmith, named

Carton, who with his family, lived in a house close to the bridge. The signalling wires on the railway were cut, and the instruments in the cabin were destroyed.

Between Enniscorthy and Ferns, an extensive trench was dug, and the rebel forces advanced and captured the town of Ferns, making the ancient [episcopal] mansion of St. Aidan’s their headquarters. Then, when they thought they were firmly entrenched, they advanced a little in the Gorey direction, but just then a train which contained a few military arrived at Camolin Station.

On seeing the soldiers, who were there for ordinary guard duty, and had no knowledge of the ‘rising’, the rebels hastily retreated to their stronghold at Enniscorthy. Here, however, they learned to their dismay that a military armoured train, including the now famous ‘Enniscorthy Emily’, a 15- pounder gun, was on the south side of the town, and only about six miles distant. There were 600 men, and 200 of them had rifles and shot- guns. They established themselves in the Athenæum as their headquarters and appointed ‘Irish Republican Police’. They appointed sentries, and allowed no one to enter or leave the town without a permit. They commandeered motor cars, food, and every description of good, including arms, and they searched houses for arms. Five constables and the District Inspector held the po- lice barracks, and the sergeant and one man was in the bank. The bank was in view of the barracks.

The rebels took possession of the Castle on the hill, and from that they fired on the barracks, and they also fired from the slopes of Vinegar Hill.

There was an open space around the barracks, and that saved the barrack. On the morning of the 28th the administrator of the parish, Father McHenry [recté Fr Robert Fitzhenry], and a Mr. [P.] O’Neill wanted the police to surrender. He (wit- ness) was very glad they did not surrender. They held out until relief sent by the military arrived on the 1st May.” [Extract ends]

Fitzhenry and O’Neill were members of a ‘Peace Committee’ working to prevent all-out conflict, and negotiating between the rebels and the British. A retired local British Army Lieutenant Colonel on furlough, Colonel G.A. French of New- bay House, had assumed local command of the British military.

Perhaps because of his stature and local knowledge, he deftly handled the situation, treated the leaders with respect, and showed considerable latitude to the rebels. James O’Connor described him as a ‘gentleman’ ‘whose family were very respected in the county’.

The upshot was that Enniscorthy managed to avoid a major conflict.

The Volunteers dispersed peacefully and the RIC emerged from their barracks and reassumed control of the town.

A galling pill for the rebels was that 200 of their political antagonists in Enniscorthy, ‘National Volunteers, Hibernians, and Unionists’, now helped the RIC to patrol the town. John O’Reilly was horrified that the British Army entering Enniscorthy was “ac-

companied by some of the Wexford (so called) National Volunteers (Redmondites)”.

“The rats all came out of their holes to welcome the British soldiers,” according to the Republican, May Moran. “My sister [Sheila Lynch] had twin boys and when the police were raiding her home, thinking there was only one baby in the cot, when one baby was lifted out a policeman pulled up the mattress and killed the other little baby. Her husband had already been arrested.”

Her brother Seán was later killed by the Black and Tans in Drogheda and after that news arrived to her mother: “I never saw her smile again.”

In Co Wexford, 270 men were arrested after the rebellion, of whom 10 weresentenced to imprisonment or penal servitude.

■ Dr Conor McNamara is NUI Galway 1916 Scholar in Residence. His books include ‘The Easter Rebellion 1916: A New Illustrated History’ (Collins Press, 2015). This article first appeared in ‘The Rising in the Regions’ supplement published by the Irish Examiner on 21 March 2016