A battle of Cork's Separatists and Constitutional Nationalists

John Borgonovo explores the political landscape in Cork in the years preceding the 1916 Rising. 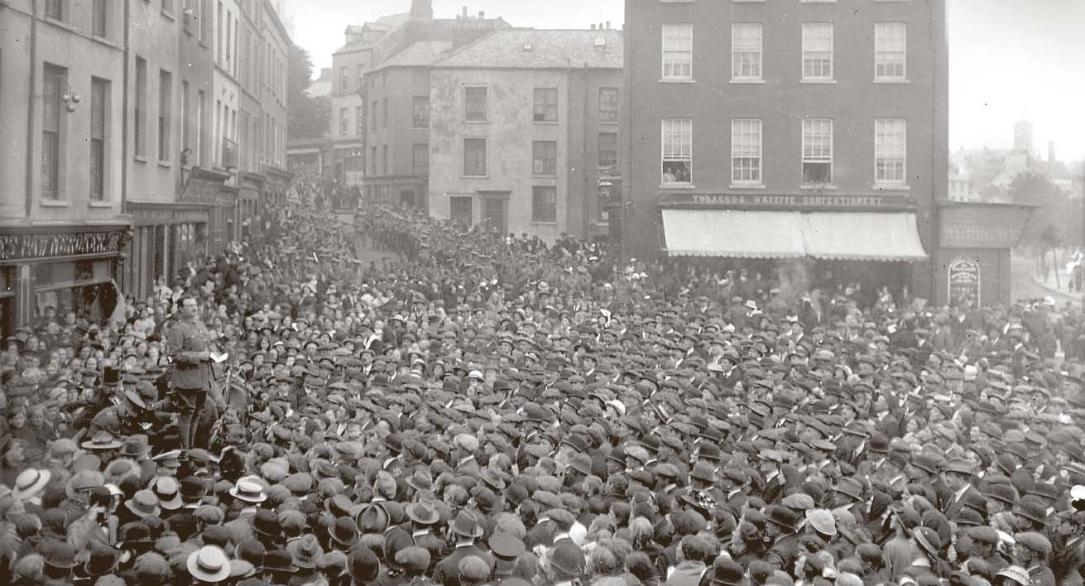 THE 1916 Easter Rising occurred at a time when the political mood in Co Cork and Ireland was changing.

Though the local public had largely supported constitutional nationalism and Irish participation in the First World War in 1914, both positions were under threat even before republican rebels seized Dublin.

Cork boasted a strong Fenian tradition, but the flames of separatism had been reduced to embers by the early years of the 20th century. Constitutional nationalism dominated the county, with a distinctly Cork wrinkle.

John Redmond’s Irish Party did not enjoy a monopoly of power as it did across most of Ireland. Instead, it faced strong competition from the All-for-Ireland League, a Cork-centred political party that appealed to separatists, trade unionists, liberal unionists, and followers of party leader William O’Brien and his colleague Tim Healy.

Prior to the First World War, Redmondites and O’Brienites engaged in fierce competition, earning Cork a national reputation for electoral street violence. However, both parties sup- ported Irish self-government within the British Empire, to be secured by ser- vice in the First World War.

Co Cork’s close association with the independence movement only followed a very long incubation period. Since 1905, Cork separatists had been building a small but vibrant community committed to the political and cultural revival of Ireland.

They possessed very little political or social clout, and resided on the margins of Cork public life. However, they acquired organising skills that later proved very useful.

The failure of John Redmond to overcome Ulster Unionist opposition to Home Rule presented advanced nationalists with an opportunity in late 1913. A core leadership group associated with the IRB set up the Irish Volunteer organisation in Cork, and the county soon boasted one of the militia’s strongest units beyond Dublin.

While separatists led the Irish Volunteers in Co Cork, constitutional nationalists made up the bulk of ordinary members. Meanwhile, female separatists established a Cork branch of the republican women’s organisation Cumann na mBan in mid-1914. 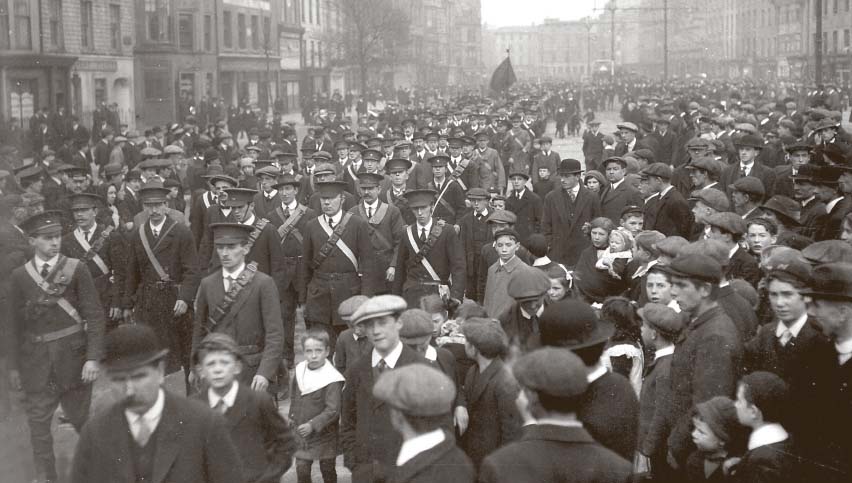 Irish Volunteers marching towards the National Monument on Grand Parade Cork, probably for the annual Manchester Martyrs’ commemoration in November 1914 or 1915. They are led by Donal Barrett, left, and Sean Murphy, Cork Brigade adjutant in 1916.[Picture: Irish Examiner]

When the First World War erupted in Europe during the summer of 1914, constitutional nationalist party leaders John Redmond and William O’Brien called on their followers to enlist in the British military forces. In Cork, as elsewhere, this pro-war policy split the Irish Volunteers, with the vast majority of members joining a new militia (the ‘National Volunteers’) formed by the Irish Party.

A minority of the National Volunteers enlisted in the British Army and Royal Navy, part of an estimated 200,000 Irishmen serving with British forces. In these early months, the remaining anti-war Irish Volunteers encountered public hostility, which
was especially vocal from those with loved ones in the British armed forces.

In terms of recruiting during the first two years of the war, Co Cork ranked 16 out of 35 Irish counties and urban districts. Like other urban areas, Cork city served as a centre of British recruiting, along with traditional garrison towns like Fermoy and Kilworth and naval communities like Cobh and Castletownbere.

In general, recruiting was strongest among the urban poor, the Catholic upper and middle-classes, and the unionist community. It remained weak for urban shop assistants and the sons of small farmers, two demographics that later made up the backbone of the Irish Republican Army.

Many enlisted in the British Army to help secure Irish Home Rule. Others wanted to stop the German invasion of Belgium and France, two Catholic countries with historic ties to Ireland. Others still were imperial patriots, loyal to the British Empire.

A large number of Irish recruits resembled young men across Europe: they were eager to prove their masculinity, break the dull routine of their lives, and follow their peers into the trenches.

The Irish Volunteer organisation grew stronger as fear of conscription into the British Army rose. In January 1916, the British Government introduced mandatory military service to England, Scotland, and Wales, but excluded Ireland, owing to public opposition. However, the threat of conscription remained. By early 1916, war fatigue was becoming visible in Cork.

On the political front, the House of Commons passed the Third Home Rule Bill at the outset of the war, but delayed the bill’s implementation. Meanwhile, Irish nationalists started to recognise partition of the island as the most likely outcome to the Ulster Unionist impasse.

Expectations rose for Irish self-government, to be granted in exchange for Irish participation in the war and as part of the expressed Allied war aim to secure ‘self-determination’ for small nations. The inability of John Redmond and the British government to satisfy these expectations created a new political environment.

After the 1916 Easter Rising, public opinion swung towards the republicans. Though lacking the social status and political muscle thought necessary for success, Cork Republicans skilfully seized their fleeting opportunity to form a mass movement to secure sovereign independence.

* John Borgonovo is a lecturer in University College Cork’s school of history, whose books include The Dynamics of War and Revolution: Cork City, 1916-1918 (Cork University Press, 2013)