While many women avoided detection and eventually qualified for pensions under the later acts for military service, others suffered the ultimate price for their work.

Although it was not proven that it was directly attributable to her work for the Republican cause, young 1916 participant Agnes McNamee died a few years later aged just 22.

While controversy and intrigue enveloped the country over the decision of Dáil Éireann a few days earlier to approve the Anglo-Irish Treaty, Agnes McNamee watched her shop assistant daughter die at their home in Dublin’s inner-city Emerald Square on January 12, 1922. The death certificate records the cause of death as phthisis, a former term for tuberculosis of the lungs. 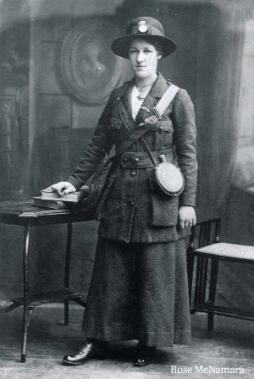 Having joined Cumann na mBan in 1915, she was with the organisation in the Jameson Distillery in Marrowbone Lane during the Easter Rising. The nature of her involvement is not set out, but her branch vice-commandant Rose McNamara vouched for her service, and she spent a week in Kilmainham Gaol after the rebellion was quashed.

A superior officer in Cumann na mBan testified to the Military Service Registration Board in 1954 that Agnes McNamee was a very active member during the War of Independence, carrying despatches, minding firearms, looking after Volunteers on the run, posting up bills, and making collections.

These activities were said to have entailed wettings and irregular meals, and it was suggested in her file that she was slow to recover from cold suffered while in jail for a week in May 1919.

Nationalist newspaper Fáinne an Lae outlined the circumstances of her detention:

On Friday last Una Nic Chonamidhe, Emerald Square, Ath Cliath, was arrested and lodged in Mountjoy Prison to undergo a sentence of seven days’ imprisonment, having refused to pay the fine inflicted on her for the ‘crime’ of collecting money for the Irish Language Fund without a ‘permit’ from the British government. The fine imposed in her case was double that imposed in other cases, evidently because her name appeared in the charge sheet in Irish.

When she got a haemorrhage while on a route march in May 1920, she spent two weeks in hospital and was later treated in a sanitorium. However, she reported back to her Cumann na mBan branch in September 1920 and kept up her duties in support of the IRA until her death.

Her mother received posthumous medals for her service in the Easter Rising and the War of Independence. However, her claim for an allowance in respect of her daughter’s death did not succeed, the relevant act requiring that her tuberculosis had to be proven to be contracted while on military service. 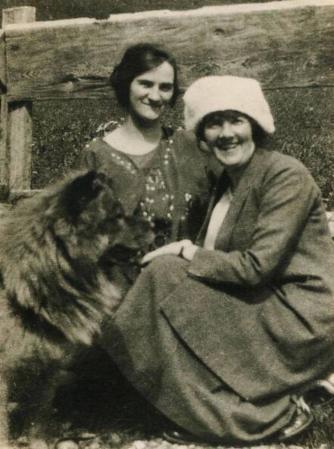 The Wallace sisters, Sheila and Nora, had a massive impact on IRA operations in Cork, along with a number of other women, according to newly released files. The key roles of women in the day-to-day organisation and command of local IRA units emerges from the latest files of dozens who sought medals or pensions in recognition of service during the Irish revolution. While most were members of Cumann na mBan, the testimony of IRA officers and others makes clear that women were often far more than just carriers of despatches or guns, the traditional profile attributed to them during the turbulent period. Among those whose significant impact on IRA operations is beginning to filter into the public domain in recent years are the Wallace sisters, Sheila and Nora, from Cork City. The death in 1970 of Nora Wallace was marked by a story in the Cork Examiner under the headline: ‘Her little paper shop was IRA rendezvous.’ But the brief article barely touched the surface of the extent to which she and sister Sheila were central to the underground army’s activities in Cork City. As stated in one of their just-released pension files by former IRA Cork No 1 brigade commander Sean O’Hegarty, their city-centre backstreet shop between Grand Parade and South Main St was at the heart of the IRA communications and organisational network.

Miss Nora Wallace was in actual fact a member of the IRA from 1916 onwards,” Hegarty wrote to the Military Service Registration Board in 1934. “She did her first work of dispatch carrying on Easter Sunday 1916, continued without intermission to do any similar work assigned to her. “The shop in Augustine Street became the centre for the receipt and issue of despatches, the point of touch for verbal messages, and, you might say, the Brigade headquarters for operations in the city area. All this applies equally to her sister Sheila.

Cork No 1 Brigade intelligence officer Florence O’Donoghue, later a key historian of the revolutionary years in the city and county, has described the Wallace sisters as deserving immortality for their work. The kitchen behind their shop was the location of meetings of senior IRA officers most nights during the War of Independence until the premises was closed by military order in May 1920. Like many other female applicants, the negative effects of the stress of being raided by the RIC and British military during the period are laid out in the Wallace sisters’ files. Nora’s doctor certified she suffered from pulmonary tuberculosis and had been treated for pneumothorax.

She contracted the disease by living in almost impossible conditions owing to her activities during the Black and Tan, and Civil Wars,” Hegarty wrote in 1933. “The disease is now quiescent but she must be in a position to give continuous and extra-ordinary care to her health.

Sheila Wallace died in 1944, but her £55 annual pension received for the few years before her death was for her role as an IRA Brigade officer, rather than a member of Cumann na mBan. This reflects an emerging theme in many of the 106 women whose files are online from this morning. Among them are many whose work was for key roles in the IRA command structure, particularly for intelligence duties carried out during the War of Independence and Civil War. Madge Barnes, (at the time Madge Coughlan), managed to secure highly important information for anti-Treaty forces when she moved from Cork to Dublin during the Civil War.

“As a matter of fact there were times when I even thought she was working for the [Free State] Intelligence Department… she became suspect and was actually going to be shot, but she managed to allay their suspicions and actually resumed her intelligence work,” wrote Cumann na mBan ex-honorary secretary Sighle Humphreys in a 1945 letter on Barnes’s file.

The intelligence activities of Lily Mernin from 1919, vouched for by senior IRA figure Piaras Béaslaí, made the most of her work as a shorthand typist for the British army’s district command at Dublin Castle. The duties assigned her by Michael Collins included the supply of addresses, descriptions, habits and other information on British officials, intelligence officers, as well as civilians working in the Castle, and to copy any documents she could.

“I set to work at once, and it was largely through my assistance that Collins was able to ascertain that the typed ‘death notices’ on Dáil Éireann notepaper sent out to prominent Republicans were typed in Dublin Castle, and even to find out the room in which they were done and the typewriter used,” she testified.

Learn more about the Wallace sisters in his Documentary on One podcast: Little Shop of Secrets