What was preoccupying the Irish Public in December 1920?

Dr Helene O’Keeffe surveys some of the main events during a ‘black year’ in Irish history.

On New Year’s Eve 1920, the country braced itself for another year of uncertainty and terror. Celebrations were muted, particularly in the south of the country were martial law had been so recently imposed. The bells of Shandon, which traditionally sounded the knell of the old year in Cork city, were stilled, and the streets deserted except for the heavy lorries of the curfew patrol. Eleven arrests were made before midnight when the air exploded with sound of train whistles and ships’ sirens. The residents around St Luke’s on the north side were startled, reported the Evening Echo, by the discharge of rockets and flares from the Victoria Barracks. The unnerving display was a fitting farewell to a tumultuous year characterised by increased militarisation and a heightened expectation of violence against people and property. The war waged by republicans against the forces of the Crown in Ireland intensified on all fronts during what the Freeman’s Journal called ‘one of the blackest years in our history’.

New Year’s Day newspapers reviewed the landmark events of 1920. Headlines about military raids, martial law proclamations and IRA attacks dominated, with short notices about civilian killings foreshadowing what would be the bloodiest six months of the War of Independence. On the 1 January, however, there was a collective editorial sigh of relief at the exit of such a ‘black year’, and hope for an end to the conflict in 1921. 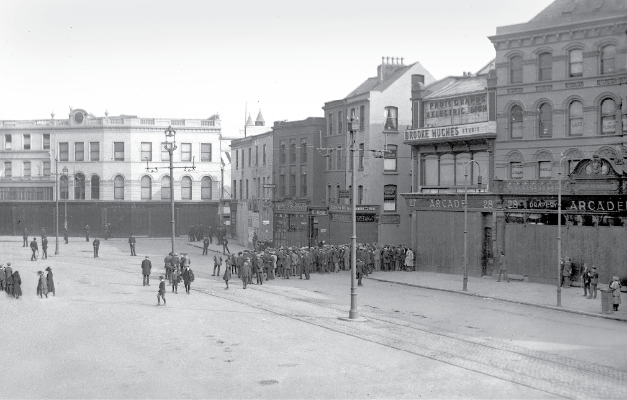 Most newspapers carried the ‘sensational announcement’ of Eamon de Valera’s safe return to Dublin. During an eighteen-month tour of the United States, the self-styled President of the Irish Republic had addressed enormous crowds, received multiple honours and negotiated the logistics of a bond drive with the often antagonistic leaders of Irish America. While he failed in his objective to secure the recognition of the United States government for the Republic, de Valera’s cross-continental tour raised international awareness and over $5 million for the Irish cause. The announcement of his return on 1 January coincided with house-to-house searches in central Dublin, fuelling rumours about the whereabouts of the president who had returned in secret to preside over a government ‘on the run’. The operation of Dáil Éireann’s ‘counter state’ had proceeded in his absence, with the emergence of the republican courts, Sinn Fein’s dominance at the local elections in January and June 1920, and the increasingly effective work of Desmond Fitzgerald’s Department of Propaganda – all of which undermined the effectiveness of British governance in Ireland.

Readers also learned on 1 January that Muriel MacSwiney had been granted the freedom of New York city; the first woman to receive such an honour. The young widow had become familiar with the glare of the media spotlight during the agonising months of her husband’s hunger strike in Brixton prison in the autumn of 1920. Terence MacSwiney’s 74-day hunger strike generated enormous international media attention and, as the London Times predicted, the death of Cork city’s Lord Mayor was ‘infinitely more eloquent and infinitely more subversive of peace than he himself could ever be’.

While certainly the most high profile, Terence MacSwiney’s hunger strike was not the first of its kind in 1920 – a year when escalating violence led to more arrests and internments and the prison system became a political battleground. The Sinn Féin propaganda machine circulated details of the length of severity of the hunger strikes, as the prisoners depended on the authorities’ reluctance to make martyrs to the republican cause. Vast public demonstrations and a general strike in Dublin in April 1920 led to the release of almost 100 hunger-striking prisoners from Mountjoy Jail. Determined not to yield to such pressure again, Lloyd George’s administration refused to release the high-profile hunger striker lodged in Brixton prison, whose death, and the deaths of Cork hunger strikers Michael Fitzgerald and Joe Murphy in October, forced the IRA leadership to ban hunger striking as a strategy. The propaganda dividends, however, had been paid. MacSwiney’s funeral in Cork on 1 November and the execution of 18-year-old Volunteer, Kevin Barry in Dublin on the same day, ensured that Irish struggle for independence remained in the international spotlight. What Sinn Féin lacked in material force in 1920, it was more than making up for in moral force.

Terence MacSwiney and Muriel Murphy on their wedding day in in Bromyard, England in June 1917 [Source: Cork Public Museum]

Hunger striking was not the only example of non-violent resistance during 1920. Most New Year’s day press covered the gradual resumption of the Irish railway services, which had been paralysed for seven months during the so-called ‘Munitions Strike’. When Irish railwaymen refused to operate trains carrying munitions of war or armed military personnel, the state-owned Irish railway companies responded by imposing a policy of widespread dismissals. By November hundreds of miles of track had been closed, over 15,000 railwaymen were out of work and the government was threatening to close the whole railway system. Bending under hardening moderate opinion, the trade unions decided to end the strike in December – an outward victory for the British government but an important symbolic triumph for the cause of Irish Independence.

The ‘Munitions Strike’ coincided with the escalation of the military conflict in Ireland from the summer of 1920. In the face of increasingly successful IRA military and intelligence operations, Prime Minister Lloyd George restructured the ineffective Dublin Castle administration in mid 1920. Sir Hamar Greenwood was appointed Chief Secretary, and the new Chief of Police, General Hugh Tudor, oversaw the recruitment of British ex-servicemen to the demoralised Irish police force. Tensions increased everywhere after of the deployment of the Black and Tans and the Auxiliaries in the spring and summer of 1920 and the enactment of the Restoration of Order in Ireland Act in August. The new coercive legislation extended police powers of search, arrest and internment without trial. Volunteers forced to go ‘on the run’ banded together to form ‘flying columns’, such as that headed by Tom Barry in West Cork which ambushed and killed seventeen Auxiliaries at Kilmichael on Sunday 28 November 1920. The unprecedented scale of this attack and the shocking events of ‘Bloody Sunday’ in Dublin a week before, belied Lloyd George’s confident proclamation on 9 November that the British government had ‘murder by the throat’. 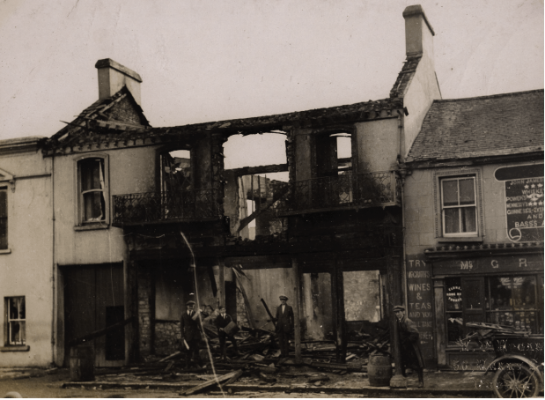 ‘Scene of an official Black and Tan reprisal, a public house in Templemore, County Tipperary burnt to the ground’. [Photo: NLI, HOGW 113]

Between June and September 1920 international opinion was increasingly outraged by the campaign of unofficial reprisals carried out by the police and military in response to IRA ‘outrages’. Dáil Eireann’s propaganda news sheet, the Irish Bulletin, chronicled the violent destruction of civilian homes and businesses, particularly in the south and west of the country, and the British and foreign press published large photographs of burning buildings and homeless people. In October the British Labour Party called for an independent investigation into the ‘causes nature, and extent’ of Crown force reprisals. The result was a Commission of Inquiry, whose delegates toured Ireland in the closing months of 1920. They recorded, for example, the pervasive sense of fear amongst the civilian population in Cork city – a bloody theatre of violence, intimidation and arson since the assassination of its first republican Lord Mayor, Tomas MacCurtain in March.

The Labour Commission’s report, issued just prior to the British Labour Conference at Westminster on 29 December, concluded that ‘things are being done in the name of Britain which must make her name stink in the nostrils of the world’. In the same week, General Sir Henry Lawson delivered his ‘Report on the Irish Situation’ to the Peace with Ireland Council. Established in October 1920 with an influential membership of politicians, peers, and clergymen, the Council was dedicated to promoting a ‘just and lasting peace between the two countries’. After a December visit to Ireland, Lawson reported that the brutality of the Crown Force reprisals, ‘directed or winked at’ by the government, had ‘only served the cause of self-government in Ireland’. Such public indictments of British policy, together with Sinn Fein’s sustained propaganda campaign, seriously undermined the coalition government’s claim to be a liberal administration.

January’s newspapers were still preoccupied with the aftermath of the largest Crown force reprisal of the War of Independence. ‘The Burning of Cork’ on 11-12 December saw five acres of commercial and residential property in heart of the southern city looted and destroyed. A ‘universal and public appeal’ from the Cork Distress Committee ran alongside articles hotly anticipating the publication of the Strickland Report. On the day after the ‘Cork fires’, Hamar Greenwood countered the chorus of appeals for an independent inquiry with assurances that military inquiry, more appropriate in the context of martial law, had been initiated by General Strickland in Victoria Barracks. The investigation lasted five days, took statements from thirty-eight witnesses and found that members of the Auxiliary Division of the RIC were responsible for the fires. While the report was ultimately suppressed to avoid fuelling the fires of public discontent, there was no doubt that the undisciplined paramilitary forces in Cork were responsible for the devastation.

Unsurprisingly, the Government of Ireland Act occupied plenty of column inches on 1 January 1921. Enacted nine days before, the new legislation established the basis for a six-county northern and a twenty-six county southern polity. It would be some months before the machinery of the ‘Partition Act’ was set in motion and most New Year’s commentators were less than convinced it would smooth the way the peace. All attempts to negotiate a truce during 1920 floundered. There was a renewed effort in December when Lloyd George asked Archbishop Patrick Clune of Perth to meet with the leadership of Sinn Fein. Dr Clune had several meetings with Collins in Dublin and Andy Cope, Assistant Under-Secretary for Ireland, arranged for the archbishop to visit Arthur Griffith in Mountjoy Gaol. Collins and Griffith were willing to entertain a ceasefire as a precursor to political negotiations as long as terms were favourable to the IRA. Lloyd George’s cabinet, which had become convinced in the meantime that the republicans were divided and desperate for a settlement, rejected the proposals delivered by Clune and insisted that the IRA surrender their arms as a condition of the ceasefire. The Sinn Fein leadership refused and the talks reached an impasse on New Year’s Eve, with a coalition cabinet committed to the continuation of the war. Four more bloody months would pass before the cabinet again considered the question of a truce.

Despite Hamar Greenwood’s claims on 30 December that the government was ‘out for peace’, the horizon was bleak for the ordinary citizens as they closed their morning papers and faced into what promised to be another ‘black year’ for Ireland.