The unveiling of the memorial at a grave of 13 IRA members executed by the British was an important day for University College Cork, writes Margaret Lantry

They were shot by British Army firing squads at the Cork Detention Barracks inside Victoria Barracks (now Collins Barracks) at different dates in 1921, and buried on the grounds of Cork Men’s Gaol, which was later taken over by UCC.

Following an escalation of the War of Independence, the British government introduced martial law to the rebellious province of Munster in December 1920 (it was subsequently extended to counties Kilkenny and Wexford). Among its many provisions was the death penalty for any civilian caught in possession of arms, ammunition, or explosives. The 13 IRA Volunteers buried at UCC were all sentenced to death for this infraction.

Patrick O'Mahony: Executed and buried in Cork Men's Gaol, the grounds of which are now part of University College Cork.

The next round of executions occurred during a four- day span in April and May 1921. On April 28, Volunteer Maurice Moore (aged 26) of Cobh, Co Cork and Lieutenant Patrick Sullivan (aged 24), also of Cobh, were both shot, following their capture during the Fourth Battalion, Cork No. 1 Brigade flying column disaster at Clonmult. On the same day, Volunteers Thomas Mulcahy (aged 25) and Patrick Ronayne (aged 26), both of Burnfort, Mallow, Co Cork, died by firing squad. Members of the 5th Battalion, Cork No. 2 Brigade, they were captured at the miscarried Mourne Abbey Ambush.

Four days later, on May 2, a firing squad shot Volunteer Patrick Casey (aged 26) of Caherly, Grange, Co Limerick. He was the quartermaster of the 5th Battalion, Mid-Limerick Brigade, captured after a firefight at Knockanevin. The final execution occurred on May 16, 1921. Volunteer Daniel O’Brien (aged 30) of Knockardbane, Co Cork, was shot five days after his capture in Aughrim, following service with the Liscarroll Company, Charleville Battalion of the Cork No. 2 Brigade.

The Cork Men’s Gaol opened in about 1803 as the Cork and County Gaol, with the Sunday’s Well Gaol acting for city prisoners. Under the 1878 General Prisons (Ireland) Act, the Sunday’s Well gaol was designated a women’s prison, while the County Gaol housed men only. Despite this change, the Cork Male Gaol is often still referred to as the “Cork County Gaol”. After 1946, the Gaol was used for remand prisoners or those on sentences of up to three months, before its final closure on April 1, 1956.

In 1946 about one-third of the site, bounding on College Rd, was handed over to UCC. It was here in 1954 that the electrical engineering building was built. This part of the site included the graves of the13 executed IRA Volunteers.

With this new ground, it was also now possible to create a vehicular entrance from College Road, which enabled easy access to the burial plot. The rest of the gaol was transferred to UCC in 1957. UCC demolished the remaining buildings, except for the Greek Revival facade and parts of the boundary wall along Gaol Walk.

IN 1944, the Cork Gaol Memorial Committee of the Old IRA Men’s Association, under the chairmanship of Tom Crofts, began collecting funds for a suitable memorial. Cork sculptor Séamus Murphy RHA was commissioned to create the stone plaque on the front wall of the gaol. The plaque, which is dated 1947, is made of limestone in three panels, all framed in bronze. The names of 18 men are finely etched in Gaelic lettering.

The monument over the grave was probably created by John A. O’Connell and Sons — the name “O Conaill” is inscribed on the monument — O’Connells had their stone yard at Watercourse Rd. This monument takes the form of a pair of vertical back panels, on which the names are carved, on either side of a stylised cross.

There are 13 burials in the plot, but a 14th name (Risteard Ua Nunáin / Richard Noonan, of Fianna Éireann) has been added to the left-hand panel. Noonan was 18 when he died of heart failure while  imprisoned in the gaol (October 11, 1922), and is buried at St Finbarr’s Cemetery, Cork. 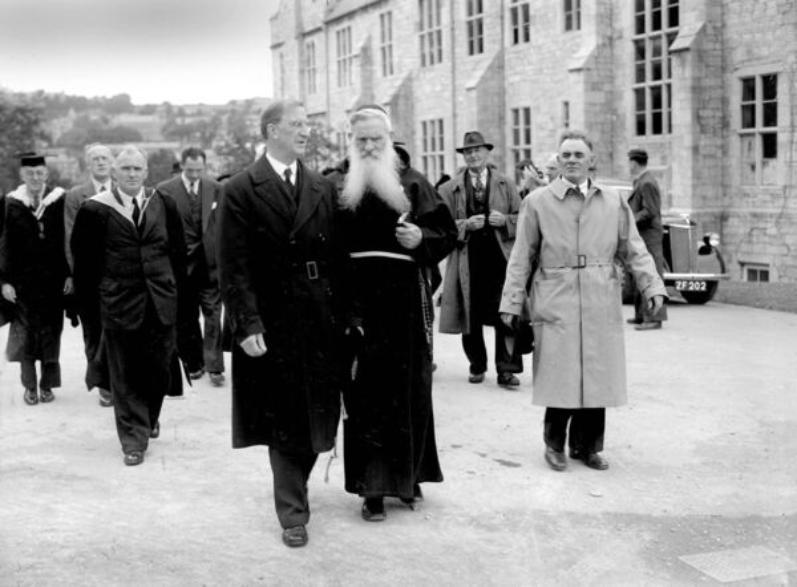 After the successful fundraising drive and construction, the unveiling of the memorial and the plaque took place on Sunday, July 11, 1948. A procession with five bands left the Grand Parade at 2pm, arriving at UCC by 4pm when Éamon de Valéra TD (he was no longer Taoiseach) unveiled the memorial plaque on the gaol wall. He then entered the UCC grounds, where he was met by university president, Dr Alfred O’Rahilly, and the registrar, Professor Henry St J. Atkins. The monument was blessed by the Rev. Fr Augustine Hayden OFM Cap. Like other Capuchins, Fr Augustine was closely associated with the republican movement, having ministered to Padraic Pearse and James Connolly after the Easter Rising and officiated Terence and Muriel MacSwiney’s wedding in 1917.

After his blessing, a decade of the Rosary was recited. A firing part consisting of IRA veterans then fired three volleys and the Last Post and Reveille were sounded. De Valéra then addressed the crowd from a platform erected nearby.

The unveiling was used to mark the handing over to UCC of the “sacred soil which enshrouds the ashes of these brave men”. Mr O’Rahilly accepted the memorial on behalf of UCC, thanked the Cork Gaol Memorial Committee which had presented it, and the outgoing government for its generosity in handing over the site. Mr O’Rahilly reminded the audience that he himself had been imprisoned in 1921, and recalled hearing the gunfire of some of the executions. A photograph of the grave monument being unveiled on the day was printed in the Cork Examiner; this shows the gaol in the background. 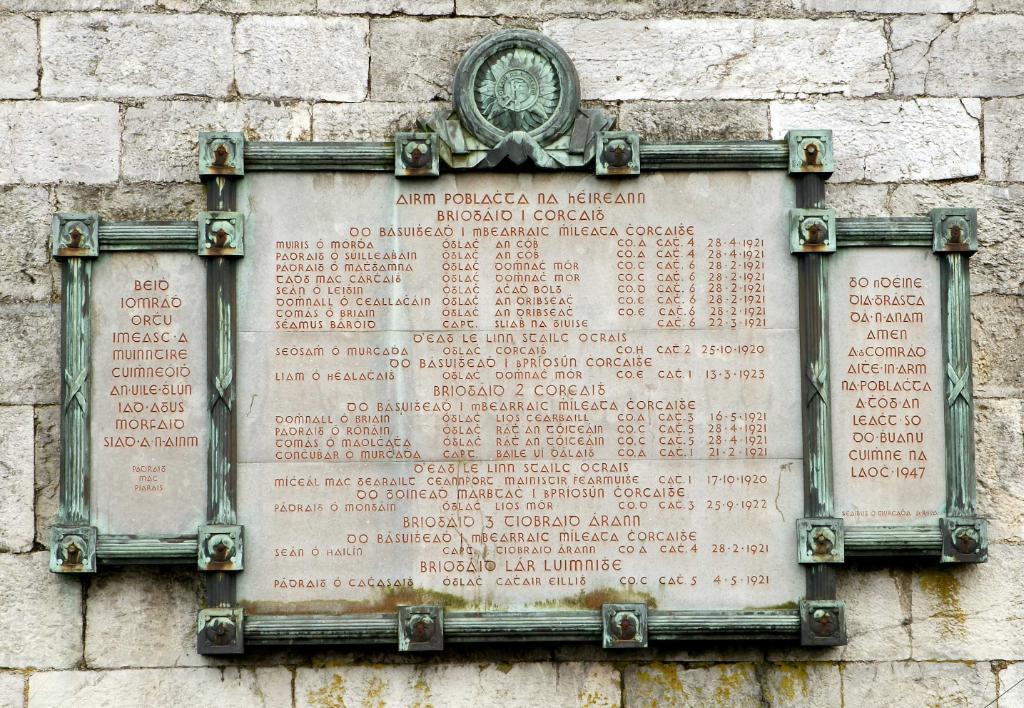 A detail of the memorial in UCC [Source: Margaret Lantry]

In 1992, three stones were laid on the grass with the names, in English, of those buried in this plot, with place of origin, along with a text: “Here lie the mortal remains of 13 Volunteers of the Irish Republican Army executed by British firing squads in the Cork Military Barracks in 1921 and buried here in what was then a part of the exercise yard of the former Cork County Jail.” The centre stone has a quotation from Padraic Pearse (this is also on the memorial plaque on the gaol wall): “Beidh iomrádh ortha i measc a muinntire cuimhneochaidh an uile ghlún iad agus mórfaid said a n-ainm Pádraig Mac Piarais”. The names of the 13 buried here were inscribed again on the flat stones of the surrounding kerb.

Though passed without comment by generations of students and staff, the mass grave and its memorial are a unique and compelling element of UCC’s remarkable architectural heritage.

Next Article
Back to Feature Articles