Alderman Tadhg Barry was shot three weeks before the signing of the Treaty. We don't know how he would have responded to the Treaty and the split, but he would have acted in a way he thought best for the cause of social justice

Alderman Tadhg Barry did not have to face the dilemma of how to respond to the Treaty. Just three weeks before it was signed, the Cork man was shot dead by a sentry at Ballykinlar internment camp in Co. Down.

Barry was the last high-profile victim of the Crown forces in the Irish war of independence. A veteran republican activist, he was a full-time organiser for Ireland’s largest union, the Irish Transport & General Workers’ Union (ITGWU), secretary of its Cork branch and an alderman on Cork City Corporation at the time of his arrest and internment without charge or trial in early 1921.

He was a well-known public figure, especially in Cork, having been a prominent journalist for many years, as well as a leading GAA official, a former Poor Law Guardian, a published poet and the author of the first rulebook for hurling.

He was a founding member of the Irish Volunteers and Sinn Féin in Cork and was prominent in the plethora of republican and ‘Irish-Ireland’ organisations that proliferated in the first decades of the twentieth century.

Barry was nearing the end of his third incarceration (having committed no crime to justify any of them) when he was shot through the heart on 15 November, 1921, while waving goodbye to comrades leaving on parole.  He had been interned in Ballykinlar since January 1921 for the crime of being a leading trade unionist and democratically elected rebel alderman.

The sense of sorrow and anger at the cruel death of a widely loved, charismatic character was exacerbated by the timing: weeks later he would have been released along with all his fellow internees as part of the Treaty settlement.

Barry’s death was huge. A Pathé newsreel, a 'Patriot’s Last Journey', captures a who’s who of republican leaders following his coffin in Dublin, including Michael Collins and Cathal Brugha, who would soon become civil war enemies and victims.

Dublin city came to a halt as 250,000 people lined the streets and the Dublin IRA had its last full mobilisation before the Treaty split. The funeral in Cork echoed those of Barry’s comrades, the martyred lord mayors Tomás MacCurtain and Terence MacSwiney.

Irish newspapers were filled with reports of his death, his funeral and the overwhelming national, and even international, reaction. Cork Corporation called for the Treaty negotiations to be suspended, but they proceeded and three weeks to the day after Barry’s death the fateful document was signed.

The united movement that elevated Barry to hero/martyr status was ripped asunder in the ensuing political split and civil war, and the name of Tadhg Barry became lost in the smoke.

A Product of Rebel Cork

According to his British enemies, Tadhg Barry was a "notorious and irreconcilable revolutionary, who has taken an active part throughout his life in every rebel and revolutionary movement in Ireland".

To his comrade, the socialist and trade unionist Cathal O’Shannon, he was "a characteristic product of Rebel Cork – courageous, kindly, generous to a fault, bold and daring, and independent in speech and action".

Since the early years of the 20th century, Barry was politically and culturally active in his native city. He was an enthusiastic Gaelic Leaguer, a key figure in the revival of the GAA in Cork and a member of the Irish Republican Brotherhood.

He was the first secretary of Sinn Féin in the city in 1906, but when that party failed to deliver on its initial promise, he threw his weight briefly behind William O’Brien MP’s All-for-Ireland League (AFIL).

The AFIL, founded in 1909, was a constitutional nationalist organisation with a strong support base amongst workers and small farmers in Cork.

It was critical of the Catholic nationalism of John Redmond’s Irish Parliamentary Party and its sectarian ally, the Ancient Order of Hibernians. The AFIL promoted the idea of conciliation and consent in relation to Unionists in order to ensure peace and avoid partition.

Barry was elected as a Poor Law Guardian for the AFIL in 1911 and served for three years. By the time he ran again (this time unsuccessfully) in 1914, Ireland’s political landscape was in transition.

He also wrote weekly columns on Cork city affairs for the Skibbereen Eagle and later the Southern Star, was a regular contributor to the Voice of Labour and was Cork correspondent of the influential New Ireland.

Barry was a founding member of the Irish Volunteers in Cork in 1913 and split with William O’Brien when the latter declared his support for the British when war broke out in 1914.

The confusion that led to Cork’s non-participation in the 1916 Rising was a source of deep frustration for Barry. He managed to avoid arrest until December of that year, when he was detained for making a ‘seditious’ speech. 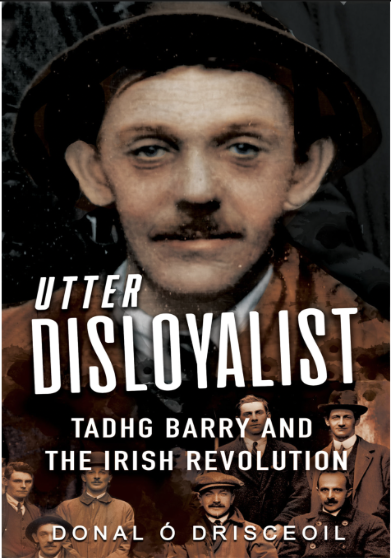 He served six months of a two-year sentence in Cork Gaol, released early on health grounds following a hunger strike. He published a poetry collection 'Songs and Other (C)rhymes of a Gaol-bird', in 1917 and was central to the rising tide of republicanism in 1917-18.

He was an Irish Volunteer officer and organiser and was also a leading figure of the new Sinn Féin. He was also a member of the ITGWU, which grew massively in this period.

Barry had been acquainted with both James Connolly and Jim Larkin and shared their vision of a Workers’ Republic. The Bolshevik revolution of 1917 provided added impetus to his socialist republicanism and radicalised him further.

Barry was arrested as part of the ‘German Plot’ swoop of May 1918, which the British hoped would hobble the advance of Sinn Féin by incarcerating many of its leaders.

He served eight months in British jails in the midst of the Spanish flu pandemic. On his release in March 1919, he became an organiser with the ITGWU and in January 1920 was elected as an alderman to Cork Corporation on an ITGWU/Sinn Féin ticket. He continued to work for the union and served on various corporation committees as the military conflict raged.

During the corporation meeting that was to re-elect Donal Óg O’Callaghan as Lord Mayor in January 1921, Barry was among nine aldermen and councillors to be arrested.

He was interned in Ballykinlar internment camp in County Down, where he spent the last 10 months of his life. He was popular in the camp, where he helped organise GAA matches and took part in wide-ranging educational activities. He also organised a trades council among the camp’s trade unionists.

Tadhg Barry was laid to rest in the republican plot in St Finbarr’s cemetery on 20 November 1921. The graveside oration was delivered by the commanding officer of the Cork IRA, Seán O’Hegarty, who declared that his old comrade had now joined the martyrs who had all ‘made the supreme sacrifice.

For this, they will indeed be remembered forever by all loyal citizens of the Republic. Three volleys were fired over his grave, scores of wreaths were laid, and the last post sounded.

Four months later, the united movement that had so impressively mourned Barry had split and was hurtling towards civil war.

Michael Collins visited Cork in March 1922 to rally support for the Treaty. He went to St Finbarr’s accompanied by prominent pro-Treaty IRA officer Seán Mac Eoin, local pro-Treatyites and Tadhg’s brother, Paddy Barry, to pay his respects to those in the republican plot.

Their entrance was blocked by a group of about 30 armed anti-Treaty IRA members who threatened to shoot them dead if they crossed the threshold. Paddy ignored the order, pushed past them and knelt at his brother’s grave.

We cannot know how Tadhg Barry would have responded to the Treaty and the split. Although he is unlikely to have been an enthusiastic Free Stater, he is also unlikely to have taken up arms against his former comrades.

He may have taken the ‘neutral’ stance of the Irish labour movement, but ultimately all we can say with certainty is that Barry would have acted in a way he thought best for the cause of social justice and the ultimate dream of a united, workers’ republic.

– This article by Dr Donal Ó Drisceoil, UCC School of History, was first published in the special Irish Examiner Supplement 'The Road to Civil War', published 31 January 2022 –
Discover more about Tadhg Barry and the 2021 Commemorations on the Cork City Council Webpage
Previous ArticleNext Article
Back to Feature Articles