After a presence that had lasted for centuries, the British military withdrawal from the 26 counties that became the Free State was effectively over in months, writes John Gibney

In January 1922, the British military began its final withdrawal from the 26 counties of ‘Southern Ireland’ that would, in time, become the Irish Free State. The very real significance of this was not lost on contemporaries. During the acrimonious debate on the Anglo-Irish Treaty in December 1921, Arthur Griffith held up the withdrawal of the British garrison as concrete proof of the value of the Treaty he had signed. The British were alert to this as well. As the chief secretary for Ireland, Hamar Greenwood, informed his cabinet colleagues in January 1922, ‘there should be no unavoidable delay in carrying through the evacuation of the Crown Forces from Ireland, and thus demonstrating in the most effectual manner to the Irish people that the Treaty is a reality, and marks the renunciation for ever the British Government’s claim to interfere in the internal government of their country’.

The British garrison in Ireland – army, navy and air force – had swollen to 51,000 by June 1921, just before the Truce ended the War of Independence, and plans for their permanent withdrawal from the 26 southern counties were confirmed soon after the signing of the Treaty. After the Treaty was officially ratified in January 1922, the ‘Provisional Government’ led by Michael Collins to oversee the transition from British to Irish rule, assumed power. As soon as this was completed, the War Office announced that the military withdrawal was to begin. The demobilisation of the Auxiliary Division had already started on 13 January, with the British Mandate in Palestine being noted as a possible destination for some of their number. The same newspapers that reported on the ‘handover’ of Dublin Castle to the Provisional Government on 16 January also reported that troop withdrawals were to begin imminently, with the Dublin dailies noting that stores and ships being readied for departure at Dublin’s North Wall. All around the country fortifications were already being dismantled and surplus supplies were being sold off. In the week following the establishment of the Provisional Government brigade headquarters in Sligo, Tullamore, Castlebar, Tipperary and Bantry were closed, and on 20 January the withdrawal of troops from the island of Ireland began, with units departing from the Curragh, Belfast, Maryborough, Tipperary, Killarney, Dundalk, Claremorris, Moore Park and Clonmel in the days that followed.

The logistics of the withdrawal were enormous, and the departure of British forces was extensively covered in the press (Dublin Corporation was reported to be actively considering the possibility of using newly emptied barracks as temporary accommodation to alleviate the perennial problem of the city’s slums). Dublin was a major transit point, but departures by ship took place from other ports across the island. By the end of January troops were departing daily, and many units were being earmarked for overseas service in Europe or across the British Empire. Some were reassigned to Northern Ireland, while others were temporarily gathered together in central locations – such as Cork, the Curragh and Dublin - prior to their eventual departure. Vast amounts of military stores had to be secured lest they fall into the wrong (republican) hands; there was too much to move quickly, and any being transported by road had to be guarded. 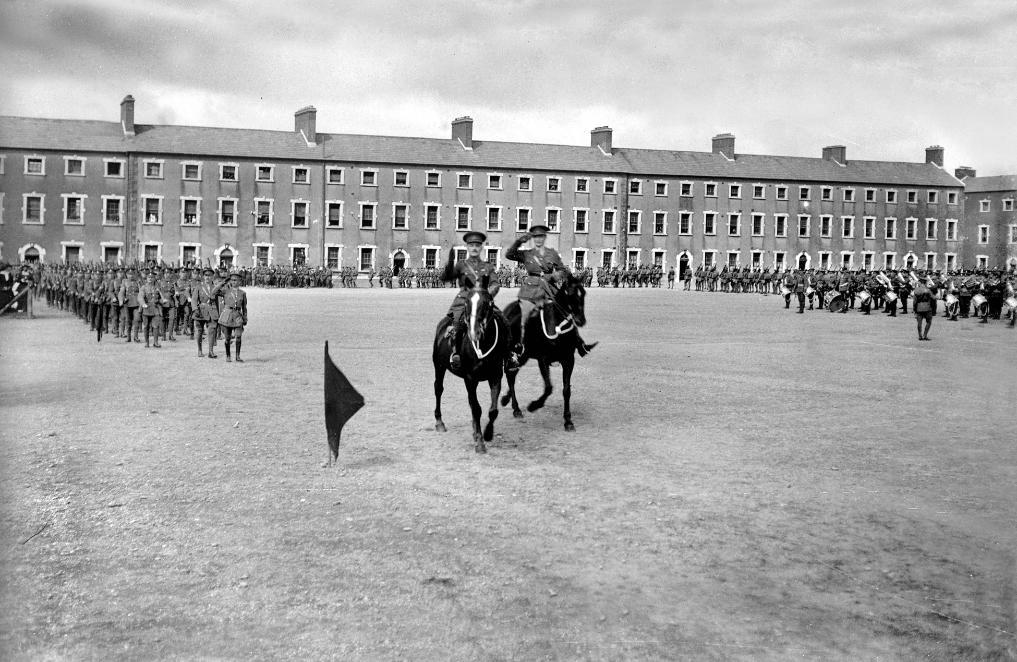 The evacuations were delayed in late January and early February due to industrial unrest on the rail network, but the movement of men and material continued within the island of Ireland; in late February, for example, two naval launches were transferred from Limerick to Carlingford via inland waterways. And as the British military departed, the barracks and outposts that they had used became vacant. Beginning with Clogheen Barracks in Tipperary on 25 January, military installations across the country began to be handed over to the Provisional Government. The handover, on 1 February, of Beggars Bush barracks in Dublin, previously home to the Auxiliary Division, had a special significance as it became the home of the new National Army. The British recognized that the establishment of a new Irish military force in uniform would bolster the impression that the Treaty, and Irish self-government, was a reality.

Despite the best efforts of the Provisional Government this could not happen overnight, and the new regime was potentially vulnerable as the British withdrew. The British were acutely aware of political sensitivities around the Treaty divide and had resolved that their troops were not to be used in aid of the civil power unless specifically requested by the Provisional Government. From an early stage the British had been concerned that their remaining forces might be provoked into action, but agreed to let the Provisional Government maintain order, rather than act themselves. In early 1922 the reports provided to the British cabinet by the General Officer Commanding, General Neville Macready, were replete with reports of attacks on the military and the police. Macready was conscious from an early stage that the vacuum created by the military withdrawal would create a vacuum in which unrest could flourish, and that the troops under his command were still vulnerable to attack.

Macready was also aware that the political situation in Ireland could be destabilised overnight if civil war broke out again or if the Treaty was rejected in an election. In mid-February he suggested that in either eventuality he could declare martial law, seize infrastructure and sideline the Provisional Government, depending, of course, on what forces were left in Ireland at his disposal. Macready had opposed a brief suspension of the movement of troops off the island of Ireland in February, insisting instead that the withdrawal should continue even though, by the end of the month, he had concluded that a civil war was likely as tensions arising from the Treaty split became more evident. In his view the continued British military presence was a provocation, while the process of the withdrawal was distracting his forces and had weakened their capacity to act. And should a British reoccupation be required in the event of the Treaty being rejected or a republic being proclaimed, it could be done from Northern Ireland in conjunction with a naval blockade. There was no need to maintain a military presence in the twenty-six counties outside the coastal facilities specified in the Treaty (the so-called ‘Treaty Ports’ of Berehaven, Cobh and Lough Swilly). The British withdrawal was conditional, but as things stood, there was little to be gained by delaying their departure.

The evacuation continued. By 11 February virtually no troops were left in Connacht west of the Shannon, and, by 25 March, Munster was fully evacuated bar detachments at Cobh, Berehavan, and other coastal towns such as Youghal, which would not be handed over until May. The relative weakness of the Provisional Government in Munster had been a concern since February, when a Lt Genochio of the Royal Engineers had been kidnapped and shot dead in Cork, presumably by the IRA. The inquest into his death was hampered by what the British viewed as the inability of Collins and the Provisional Government to assert their authority there. For that reason, some British units in Munster would be kept in place in Cork and Limerick for much longer than they had anticipated.

Attacks on crown forces were a constant feature in the background of the evacuation. But Macready was struck, at the end of March, that the evacuations – which were often large events, complete with military ceremonials - had not been met with hostility; rather, he reported that at least some of the inhabitants of garrison towns had been apprehensive about the departure of the military. This may have been rooted in political loyalties, but the British military had been a fixture of Irish life for centuries. Since the networks of barracks had been built from the seventeenth-century onwards, patterns of recruitment, the tradition of soldiers marrying into local communities, and the extensive service requirements of the military ensured that the British armed forces were woven into the socio-economic fabric of towns and cities across the island. They had been a customer as well an employer. Now this was ending. The future was unclear, and the withdrawal was bound to have an impact on everyday life.

By May the evacuation was nearing its end. On 4 May the RAF departed from the aerodrome at Baldonnell, the barracks at Naas and the Curragh were evacuated on 16 May, and Macready was able to report that by 18 May all troops had been evacuated from Southern Ireland, bar those stationed in the Treaty Ports and the detachments gathered in Dublin; these would remain in place as a precautionary measure until the Irish Free State came into existence in December 1922. After a presence that had lasted for centuries, the British military withdrawal from the 26 counties that became the Free State was effectively over in a matter of months.

John Gibney is Assistant Editor with the Royal Irish Academy’s Documents on Irish Foreign Policy series and is the co-author (with Kate O’Malley) of The Handover: Dublin Castle and the British withdrawal from Ireland, 1922 (Royal Irish Academy, 2021).

– This article by Dr John Gibney, was published in the special Irish Examiner Supplement 'The Road to Civil War', published 31 January 2022 –
Previous ArticleNext Article
Back to Feature Articles