Michael Collins - from Truce to Treaty

For the first few weeks of the talks that lead to the signing of the Anglo-Irish Treaty, the Irish delegation lead by Michael Collins enjoyed the better of the exchanges with the British. However, the negotiations began to turn and ended up with, as Collins famously expressed, the signing of his own death warrant, writes UCC historian Gabriel Doherty

As someone who had spent much of the War of Independence with a substantial bounty on his head, Michael Collins would have been forgiven for having an extra hour in bed on the morning of Tuesday, 12 July 1921, the day after the truce came into effect.

Freed now from the imminent threat of assassination or capture by Crown forces, he could turn his attention to the future, both national and personal.

Regarding the latter, his romance with Kitty Kiernan blossomed, and, being invited to attend the weddings of a number of their fellow republicans over the following months, they could contemplate their own nuptials with the same excitement as any young couple with a bright future ahead of them.

The altered panorama of the national question, however, was not quite as sunny. For all the unalloyed joy that had welcomed the silencing of the guns, Collins knew that this new, political, phase of the voyage had plenty of submerged rocks upon which the ship of the Republic could run aground – and he was, at best, First Mate, not Captain, and could only recommend, not dictate, its course.

However much the focus was on politics, Collins, and the rest of the upper echelon of the Volunteers, knew they could not rule out a return to war.  For this reason, they sought to maintain discipline within the ranks of the IRA, and to continue recruiting, training, intelligence work, and the purchase of weapons.

But the scale of relief and euphoria that came with the Truce - for civilians and the IRA - meant that it was impossible to keep a tight rein on those emotions and on that discipline – especially for those who had family members ‘on the run,’ or in gaol.

Collins (former secretary to the prisoners’ support organisation) was well aware that such developments militated against an easy return to war, and such considerations played a role in his political calculations.

Another consideration was that the area on the island where the IRA’s reach was most limited – north-east Ulster, and Belfast in particular – continued to experience violence on a disturbing scale even after the truce, with the Catholic-nationalist population disproportionately affected.

The widespread destruction of Catholic homes and the killing of 15 civilians in Belfast on its ‘Bloody Sunday’, 10 July, indicated just how vulnerable that population would be in the absence of any broader political agreement – or even (and this was a brutal reality) in the event of one.

As one of the few TDs who represented a constituency in the six counties, Collins was better placed than most to appreciate the scale of the threat posed by state and non-state forces loyal to the unionist leadership, but almost as helpless as any in trying to stymie it.

The public meeting of the Second Dáil on 16 August (the first such session since its attempted suppression by the British two years before) was Collins’ first open appearance since becoming the de facto leader of the domestic separatist campaign during de Valera’s absence in America, and the point after which further incognito activity became impossible.

As minister for finance in the republican cabinet, Collins had an excellent grasp of the strengths and weaknesses of the State building project sponsored by the Dáil since its inaugural meeting two-and-a-half years before.

In his speeches to the assembly, he indicated broad satisfaction with the state of the constructive political programme, at least in financial terms. He did express the view that the Dáil courts, which had first been driven underground in Munster following the imposition of martial law, and then ceased to meet altogether in many places, should be resurrected – but by and large his tone was upbeat.

Such was the consensual nature of Dáil proceedings at this point, he was not pushed to state his own views on the effect of the truce and the move towards formal negotiations – not that he was likely to have revealed much on these scores in any event.

It is noteworthy that he was not included in the list of the republicans who accompanied de Valera to London on 12 July, prior to the latter’s face-to-face meeting with Lloyd George in Downing Street two days later.

Given his famous objection to being included in the delegation that travelled to London in October to negotiate the Anglo-Irish Treaty, it seems likely that he would have resisted such an invite. In any event, he used the time well and went on a tour of inspection of his native county to familiarise himself with sentiment there.

Party to the rejection of the British offer of qualified Dominion Status on 20 July by both the Cabinet and the Dáil, he was not consulted during the subsequent protracted exchange of telegrams between Lloyd George and de Valera, being consumed by military matters during these weeks.

He was aware, of course, that a determined effort was being made to ensure talks could proceed, and characteristically sought to guarantee, in advance of same, that sentiment within his Irish Republican Brotherhood power base was secure in his favour.

de Valera’s decision not to attend the Anglo-Irish conference, which was the outcome of these pourparlers, came as a shock to Collins but not nearly as much as the demand that he should. 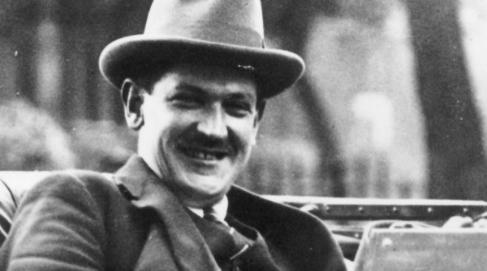 He objected strongly, arguing (cogently) that, such was his repute, his absence could be used to extract concessions from the British, in order to satisfy the militants in Ireland. de Valera countered that this was actually a compelling reason for his presence. He consented to travel as a soldier who obeyed an order against his judgement, but he was thoroughly and visibly dispirited at the prospect.

In light of their subsequent split over the Treaty it can hardly be maintained that de Valera was ‘setting up’ Collins to take responsibility for the compromise that, it is argued, de Valera knew would be the inevitable outcome if the negotiations succeeded.

For one thing, de Valera seemed convinced that his idea of ‘external association’ of an Irish republic with the British empire was a viable, realistic one (and the famed British historian A.J.P Taylor, for one, argued that he was correct).

More importantly, de Valera was insistent that he and the Cabinet in Dublin be briefed in detail as to the progress of the talks, and be consulted in advance of agreement on any substantial point.

Most significant of all, he insisted that any final text be referred back to Dublin before the plenipotentiaries would be authorised to sign. Had these instructions been followed in every particular, the Treaty split would not have happened, at least in the catastrophic way that it did, for the united Cabinet would be as one in either rejecting or accepting the final text.

In fact, up until the early hours of 6 December, 1921, Collins and Arthur Griffith, the two principals on the Irish side, and the other negotiators, did follow their instructions to the letter, and there was no outward sign of any major fissure developing between the republicans in the Irish and British capitals.

Moreover, for the first few weeks of the talks, if anything the Irish enjoyed the better of the exchanges, and the British were unable to force their opponents across the table to abandon any of their bedrock positions.

Collins played a full part in this stage of the talks and his intelligence and verbal skill made a very favourable impression on his British counterparts, including Winston Churchill and the arch-Unionist, Lord Birkenhead. He was paid the tribute of being singled out by the British, along with Arthur Griffith, to shoulder the main burden of the talks from November onwards.

It is difficult to discern the exact point at which the tide in the negotiations began to turn in favour of the British, but Lloyd George certainly used the issue of the border (and the promise of a Boundary Commission to revise same) most adroitly as a means of moving the republicans from the ‘rock’ of the Republic.

In a nutshell, he anticipated and negated the republican strategy of seeking to ensure any collapse occurred on the question of partition rather than of loyalty to the Crown, and ensured that no such breakdown occurred on either point.

Collins seems to have come to the conclusion during the talks that there was a point beyond which the British would not, could not, move. Loyalty to the Crown and membership of the Empire were the twin pillars of that position, and that they would indeed go to war (and likely win) if the Irish refused to accept same.

One cannot meaningfully prove whether these assumptions were valid or not – a reasoned case can be made either way – but the sincerity of his motives is hardly in doubt. On this basis, at the very last moment, he reversed his position, and appended his signature to the Treaty.

He famously expressed the belief that in so doing he had signed his own death warrant. Tragically, on this, as on so many other points, his judgement was proven correct.

Next Article
Back to Feature Articles