The Lord Mayor of Cork, Donal O’Callaghan, stowed away on a ship to the US and managed to appear in Washington before the American Commission on Conditions in Ireland and state: "I charge the British Crown forces with the Burning of Cork".

One hundred years ago this week, the Lord Mayor of Cork, Councillor Donal O’Callaghan, presented testimony in Washington before the American Commission on Conditions in Ireland and stated: "I charge the British Crown forces with the Burning of Cork".

His journey to America to appear before the Commission was an incredible story in itself. Fearing for his life after the Burning of Cork in December 1920, Donal O’Callaghan fled to America as a stowaway on board the steamship, West Cannon.

After being discovered by the Master of the ship, Cork’s lord mayor was put to work as a crew member.

On arrival in Newport News, Virginia, on 4 January 1921, O’Callaghan and his travelling companion, Peter MacSwiney (brother of Terence), were arrested. 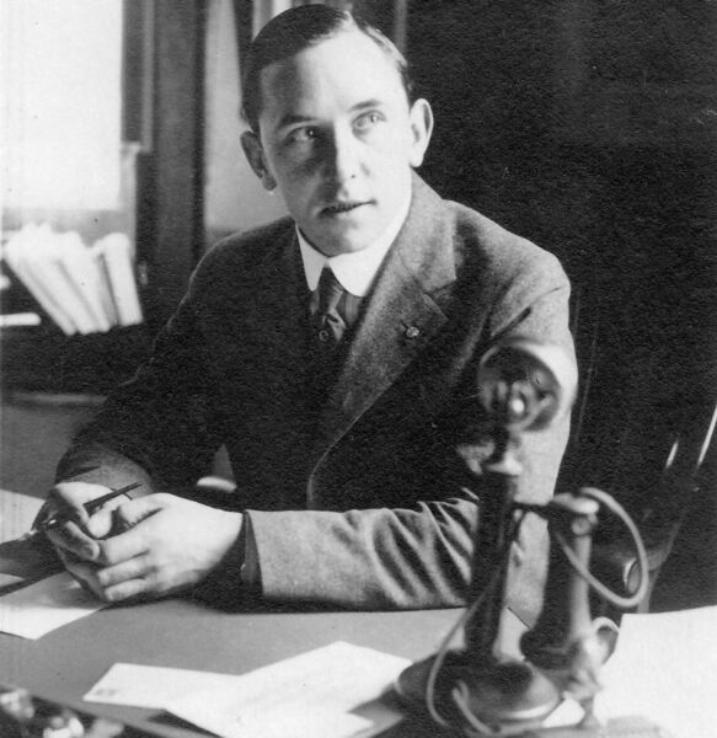 Donal O’Callaghan during his US trip, in the office of his attorney, Michael Francis Doyle, in Philadelphia. [Photo courtesy of Cork City and County Archives.]

The following day they appeared before a Board of Special Inquiry, composed of US immigration officials.

MacSwiney possessed a passport issued by the American Consul and he was set at liberty. O’Callaghan had no passport and a deportation order was issued against him.

With the help of Irish-American supporters of Sinn Féin, O’Callaghan reached out to two attorneys, Michael Francis Doyle and J.T. Lawless.

They submitted an appeal against the deportation order and he was released to them. Pending the hearing, Cork’s ‘Refugee Mayor’ made headlines in Ireland and America.

In an interview carried on the front page of the New York Times on January 10, O’Callaghan expressed confidence that he would be allowed to testify in Washington at the Commission on Conditions in Ireland.

That same day, his case was formally placed before the US Secretary of Labour, William B. Wilson.

Doyle and Lawless focused on the term ‘seaman’, as defined in an Executive Order issued by President Woodrow Wilson on 22 May, 1918.

The attorneys argued that O’Callaghan was a stowaway employed on West Cannon and therefore constituted a seaman as defined in law. 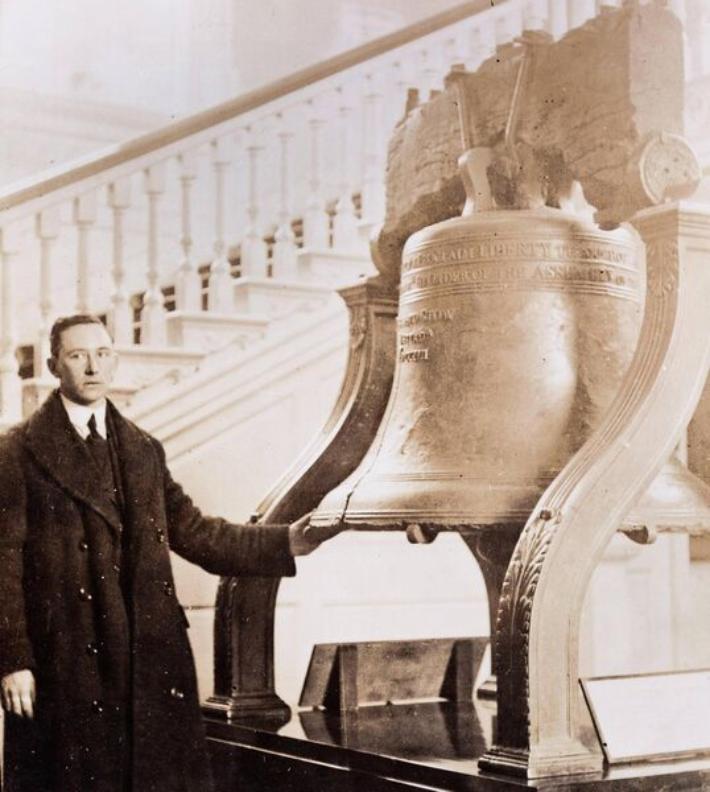 Donal O’Callaghan during his US trip at the famous Liberty Bell in Philadelphia. Photo: courtesy of the Cork Public Museum

The US Secretary of Labour, agreed and he ordered the cancellation of O’Callaghan’s parole, allowing him to present evidence at the Commission. O’Callaghan immediately made his way to Washington.

Over the course of two days, 13 and 14 January, at the Commission in Hotel LaFayette, O’Callaghan provided detailed testimony and became the public advocate of his city and his country.

The Commission, which arose from a call by the New York newspaper, the Nation, was made up of public figures from across the United States, including senators, congressmen and mayors.

Levi Hollingsworth Wood was appointed as Chairman of the Commission. Frederic Howe was the Vice Chair and amongst the other Commission members were the sociologist Jane Addams (Nobel Peace Prize winner in 1931) and the former Governor of Massachusetts, David Walsh.

The Commission gathered for six public hearings between 18 November, 1920, and 21 January, 1921. Muriel and Mary MacSwiney, widow and sister respectively of Terence MacSwiney, both gave evidence to the Commission.

Unsurprisingly, the British Government took a dim view of the Commission and the London Times (September 22, 1920) disparagingly described it as ‘a strange mixture of Anglophobes, idealists and radicals’.

For Donal O’Callaghan, the Commission hearings were an opportunity to tell an American audience of the situation that prevailed in Ireland, and especially in Cork.

An example of the lapel pins distributed by Donal O’Callaghan during his speaking tour in America after his star turn at the Commission.

He did not waste the opportunity. When asked about how difficult it was to carry out his duties as Cork’s first citizen, O’Callaghan replied: "I have moved around the city without a break, excepting possibly a week or two, since my election as lord mayor.

"While in the city, I move around carefully, always keeping a careful look-out for unwelcome visitors; and of course at night moving from house to house in the way that all men in Ireland connected with the movement do."

O’Callaghan explained that he was in constant danger of arrest and, over the previous six months, his house had been raided eight times. He said that this situation applied to his fellow councillors as well, who were frequently targeted by British forces.

He was very well prepared for his appearance before the Commission and he read more than 30 affidavits, depositions and testimonials relating to incidents such as the shooting of Professor William Stockley and the burning of the city.

At the conclusion of his second and final day of testimony, O’Callaghan was thanked by Chairman Levi Hollingsworth Wood for having come before the Commission and for being so well prepared. 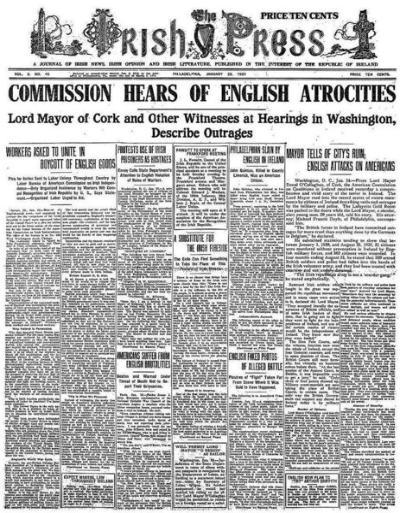 Irish Press newspaper coverage of Donal O’Callaghan’s evidence before the Commission. Coverage in Britain thad a different view of the proceedings with the London Times disparagingly described it as ‘a strange mixture of Anglophobes, idealists and radicals’.

When the Chairman asked if he had any general remarks to make by way of conclusion, O’Callaghan took full advantage, not so much delivering remarks, but a 1,500-word pre-prepared speech, during which he challenged America to come to Ireland’s aid.

He also pledged that Ireland was prepared to fight to annihilation for the right of self-determination. The lord mayor’s lengthy closing speech was greeted by sustained applause from those present.

His testimony was widely reported across America, which was partly due to the fact that William Randolph Hearst was a member of the Commission. O’Callaghan’s evidence went a long way to counteracting the ‘official’ version of the Burning of Cork.

The published report of the Commission concluded:

Behind the tragedy in Ireland lies the determination of the Imperial British Government to hold Ireland in its grip even at the cost of substituting for the orderly government of the people’s choice, fairly established in the face of opposition, a system which can only be called organized anarchy.

"The answer to this attempt, as events make increasingly plain, is violence and yet more violence".

The report referred to the testimony of the lord mayor, about the Burning of Cork. It stated that he had charged the British Imperial forces as being guilty. 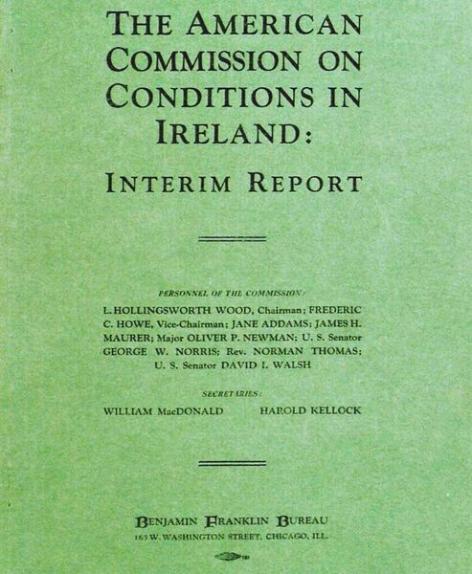 The cover of the Commission Report. Read the digitised version here

While there was not direct proof of this accusation, the Commission felt on balance that this was indeed the case. The American Commission on Conditions in Ireland was undoubtedly one-sided in terms of the evidence it heard but it made an impact and helped turn public opinion in America towards support for Ireland’s fight for self-determination.

O’Callaghan was at the heart of this. After his star turn at the Commission, he was a man in high demand and he embarked on a series of high-profile public lectures across America.

Aodh Quinlivan is a lecturer at the Department of Government and Politics in UCC. His new book, Forgotten Lord Mayor: Donal Óg O’Callaghan, 1920-1924, was published in November as part of Cork City Council’s Centenary Commemoration Programme.