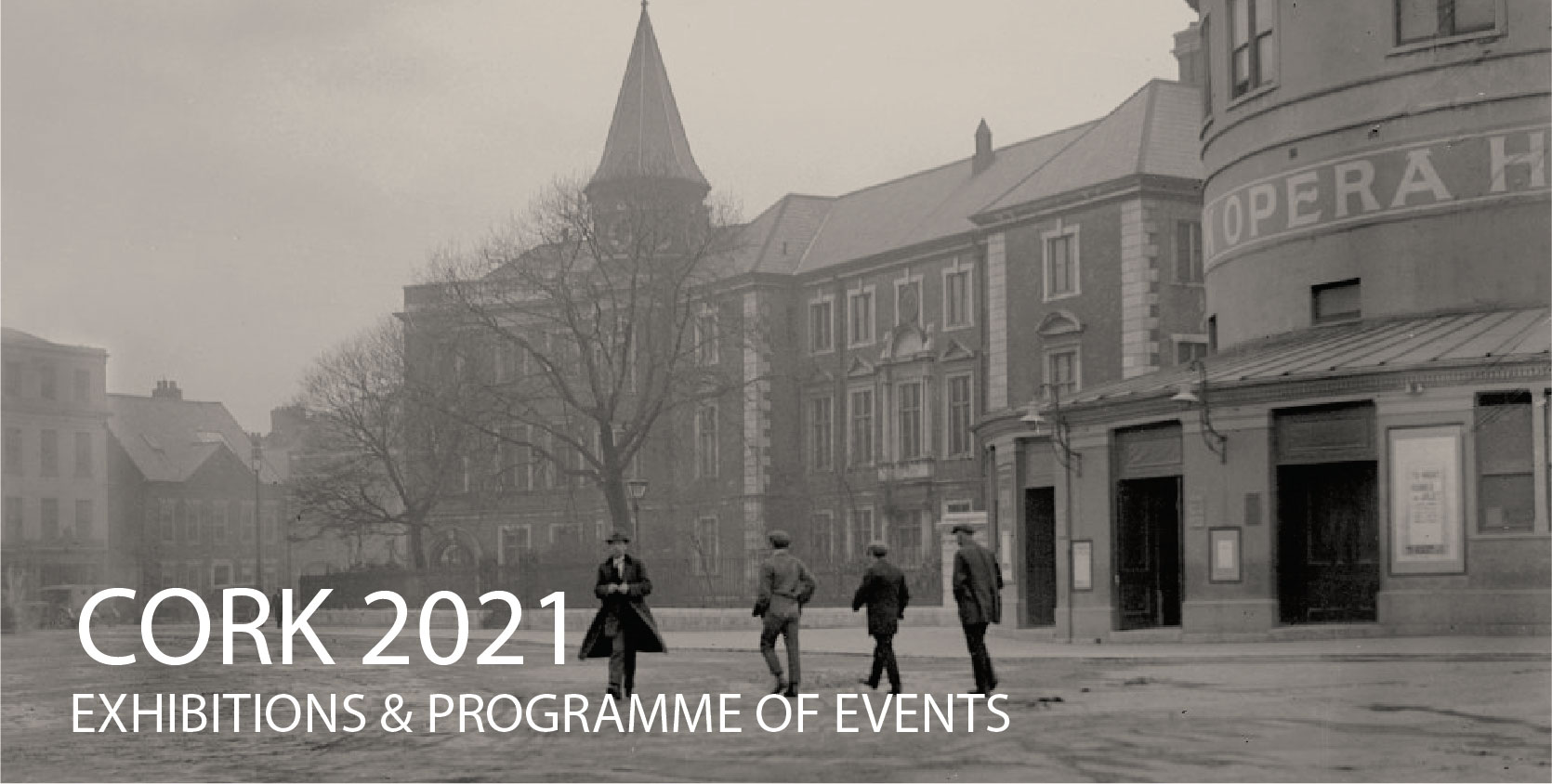 By Every Means at Our Command: The War of Independence in Cork

The aim of the exhibition is to give a broad and informative overview of how the war progressed in Cork from January 1919 until the truce on 11th July 1921. Using original artefacts, images, and documentation, (many of which have never been on display before), the exhibition will illustrate the roles played by the Republican and Crown forces while exploring their strategies, tactics, equipment and experiences. The exhibition will contain uniforms, weapons, and other personal objects to illustrate the realities of living, and fighting, through this war.

Online Exhibition: The Burning of the City

This is a two-part exhibition featuring pdf exhibition panels. The first, entiitled, Cork: A City Burned ~ A City Reborn, explains how the heightening tensions and deepening conflict set the stage for the catastrophic events which befell Cork City on the night of December 11, 1920. The second exhibition entitled Cork: A Library Burned ~ A Library Reborn, tells the story of the Library moving from its first location in Emmet Place to the elegant building on Anglesea St in 1905.

Exhibition: For Those that Tell no Tales

This Exhibition explores the life and times of trade union activist and City Councillor Tadhg Barry and his place in History. Barry trained the first camogie team in Cork and was a founder member of the Irish Volunteers Cork Corps. He was killed while interned during the Truce period, just before the signing of the Anglo-Irish Treaty in 1921.

The exhibition, which is funded by Cork County Council’s Commemorations Committee and the Department of Tourism, Culture, Arts, Gaeltacht, Sport and media, tells the story of the 1200 men held on the island for their Republican activities in 1921. The exhibition contains a number of new artefacts donated by the families of the men held on the island.  These include coins shaped into badges and pins, prisoner carved wooden artefacts, and there are several diaries and autograph books kept by the men.

Reopened to the public from May 2021, the Independence muesum displays a selection of fascinating artefacts relating to the War of Independence period, including a revolver, once owned by Tomas MacCurtain, used to assassinate RIC District Inspector Oswald Swanzy in 1920, and the silver dish ring gifted to Terence and Muriel MacSwiney on the occasion of their wedding. The 'Terence MacSwiney Weekened', at Kilmurray closes on Sunday 24 October with the exhibition:  ‘94 days: The Longest Hunger Strike, Cork and Brixton, 1920’

Citizen Nowhere / Citizen Somewhere focuses on the international legacy of Terence MacSwiney’s hunger strike and death, and the idea of nation as an imagined state to which MacSwiney’s own essays, Principles of Freedom, aspired. The exhibition will look at the often transitory nature of nationhood and features contemporary artists’ responses to their own countries’ status – many whose leaders had been directly influenced by MacSwiney’s words and actions – from being citizen of nowhere, under direct rule, to being a citizen of somewhere after liberation.www.crawfordartgallery.ie

Project: Centenary Timeline for the County of Cork

This document provides hundreds of key dates with regard to the involvement of County Cork in the War of Independence and Civil War. These include the majority of the key occurrences of 1920 – 1923 including all major events from the County of Cork (including some other locations that involved people from County Cork), as well as key developments on the national level (or elsewhere in the country) during this timeframe. A separate and ongoing project organised by Cork County Council, is the documenting of War of Independence and Civil War Memorials in the County of Cork.

This documentary examines the experience of women in Cork city during the Irish Revolutionary period, 1919-23. The story is told through the lens of four Cork women from different traditions who each made a significant contibution to the social, cultural, political and military aspects of the struggle for independence. Defined by their courage, commitment and compassion, their stories illustrate the important role played by women during this tumultuous period. Produced by St. Peters Cork and Wombat Media, and featuring historians Helene O'Keeffe, Gerry White and Anne Twomey, the documentary will be screened during the Cork International Film Festival on Sunday 7 November.

Conference: Negotiations: New Perspectives and Appraisals of the Anglo-Irish Treaty, 1921-2021

UCC School of History hosts a two-day virtual conference to explore these complex issues and the processes of the Anglo-Irish negotiations.  Acting in collaboration with the Steering Group of Descendants of the Irish Delegation sent by Dáil Éireann in 1921, and funded by the Department of Tourism, Culture, Arts, Gaeltacht, Sport and Media this conference will also seek to understand the involvement of the men and women who formed the Irish Delegation, and their counterparts on the British side.

The history and archives workshops offer the opportunity to learn and engage with unique archival collections from Cork history in the 1912 to 1923 period. The theme of these workshops is 'The Blarney Street Revolutionaries', with particular focus on the lives of Tadhg Barry (1880-1921) and Diarmaid Fawsitt (1884-1967). To mark Cork's signifiacant centenaries Cork City and County Archives will also digitise 100 key documents from its collections related to the War of Independence and 1912-1922 revolutionary period and will display them online with descriptive information.

Celebrating its fifth year in 2021, the West Cork History Festival aims to make a contribution to the local cultural programme in West Cork and to wider conversations about important historical subjects. The programme in 2021 was virtual and constructed around the two connected strands of ‘Ireland in 1921’ and ‘Ireland and Empire’. Notable speakers included Fergal Keane, Professor Jane Ohlmeyer, Professor Roy Foster, Dr Aoife Bhreatnach and a panel discussion on the Black and Tans featuring Professor Marie Coleman, Dr David Leeson, Dr Edward Madigan and Professor John Horne. Most of the Festival programme is free to view on the West Cork History Festival website.

To mark the centenary of the Truce between Britain and Ireland that brought hostilities in the War of Independence to an end, St. Peter’s Church in North Main Street in Cork will to host an 'Evening of History' with historians Dr John Borgonovo and Dr William Sheehan. The topic under discussion will be ‘The War of Independence in Cork from both sides of the conflict’

Cork City Library presents a series of lectures via Zoom as part of its History Roadshow. On 2 March 7pm – Myles Dungan presents: What Did You Do In The War of Independence, Grandad? He will talk about the bloody narrative of his extended family during the revolutionary era and offers suggestions on how to research the activities of your own ancestors in that seminal conflict. On 9 March at 7:30pm, Myles Duggan presents The War in the Shadows, A talk on Michael Collins, the Squad and the IRA versus British Intelligence. On 16 March at 7pm, Sinead McCoole presents: The Eyes & Ears – Women’s Role in the Campaign of Independence