Tomás MacCurtain, murdered 100 years ago this month, was haunted by his lack of action during the Rising but that only drove on his desire to achieve Irish independence, says Gabriel Doherty.

Most of all, however, he is known as a republican icon, a talented, industrious individual who was cut down in the prime of his life in truly shocking circumstances, and whose death was the occasion of a landmark entry in Cork’s separatist martyrology.

As with descriptions of so many of the other fallen of this period, there is nothing necessarily wrong with this pen picture, but the concentration on his death has had the unfortunate consequence of foreshortening the lens of his life, so that only the last moments are sharply in focus, and all that preceded it forms an amorphous, undifferentiated background.

This outcome is certainly to be regretted and for many reasons, the most important of which is the simplest: that to understand why it was that Lord Mayor Tomás MacCurtain was singled out for assassination by the Royal Irish Constabulary on the night of March 19-20, 1920, one has to study who he was, and how he had come to occupy the most important office within the city.

There was little in his early youth that in hindsight marked out Tomás MacCurtain as destined for greatness — indeed, this representative “everyman” quality was and remains one of his most endearing traits.

Born into the type of large Catholic household that was typical then and was to remain so for most of the following century, he was reared in rural Co Cork into the small family farming background that was, again, the norm for many Irish youths for decades to come.

Perhaps the first sign of distinction came towards the end of his primary education in Burnfort National School, when his academic ability was readily apparent.

At the age of 12, his life had reached the first of many crossroads.

In contrast to the experience of the vast majority of those of his contemporaries, who were denied a choice as to whether they would continue their education to what would now be termed second level, by dint of his raw intellect he was able to take up a place in the famed Christian Brothers’ academy, the North Monastery school — albeit that the move dictated that he had to leave his home and move to Blackpool, on the northside of Cork City.

There is no doubt that it was here that one of the principal passions of his life — Gaelic culture in its broadest sense — was nurtured and refined.

Indeed, so total was his embrace of the revivalist project, that he not alone joined the Blackpool branch of the Gaelic League, but became its secretary, and the League’s full-time organiser for south Munster, all while still a teenager.

For good measure, and again in keeping with the spirit of the times, he gaelicised his name, so that Thomas Curtin (as he had been known since birth) gave way to Tomás MacCurtain.

Furthermore, he learned to play the fiddle as part of the mini-orchestra he helped to create under the auspices of the Blackpool branch of the League.

And if a new job, new name, and new musical instrument were not enough, he also found lasting romantic love through the League, as one night, when giving a class on behalf of another teacher, he met Elizabeth (better known as Eilís) Walsh — herself of Fenian stock, and a noted camogie player.

Engaged in 1906, they married two years later. Together they raised six children, although the life of the family was struck by a double tragedy, when, first, Patrick, one of the two boys, died of meningitis aged three; and, secondly, when the twins Eilís was carrying at the time of her husband’s death were delivered stillborn two months later. 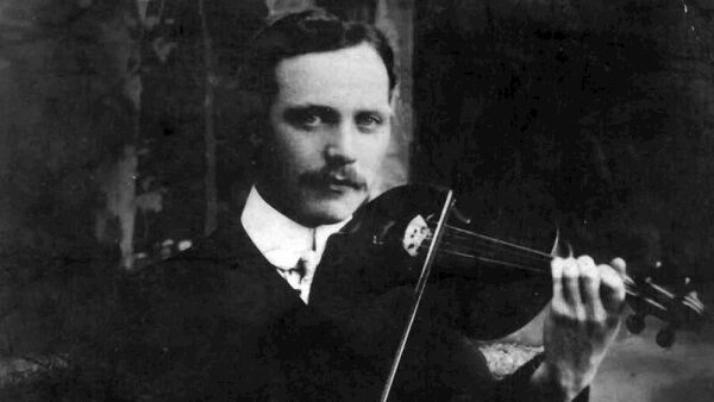 With his new responsibilities, Tomás left the employ of the League for a less peripatetic lifestyle. Thus, began a series of posts (of varying duration) as a clerk with a number of prominent city firms, including the Cork Steam Packet Co and Suttons.

It was during this phase that he discovered not just a flair for business, but also a passion for Irish industrial development in general — in effect the commercial application of the “Irish Ireland” philosophy that was so dear to his heart.

So strong was this sense of commitment to this oft-neglected aspect of the Gaelic revival that he went into business himself, first (in 1915) with his brother Seán, and subsequently on his own as the owner of the Artan clothing factory.

This had two unusual reputations at the time: Firstly, of paying the same wages to its female as to its male employees; and, secondly, of choosing employees absolutely without reference to their political views — with many of the young female workforce having at least one close male relative serving in the ranks of the British Army.

A political as well as a cultural separatist, he was drawn to Arthur Griffith’s Sinn Féin soon after its foundation in 1905, and remained a member through its various vicissitudes and changes of direction: Most obviously in late 1917 when it dropped its support for an Austrian-style “dual monarchy” in favour of a republican form of government for the country.

That he favoured the latter is readily demonstrated, most obviously with reference to his membership of the underground Irish Republican Brotherhood, into whose ranks he was sworn in 1907 by Seán O’Hegarty (like MacCurtáin, a future Commandant of Cork No 1 Brigade of the Irish Volunteers).

Even at this point his enthusiasm for all things republican was clearly a long way from being satisfied, and four years later he assisted in the formation of a sluagh of Fianna Éireann in the city.

This was the eve of the constitutional crisis precipitated by the introduction into parliament of the third home rule in April 1912. 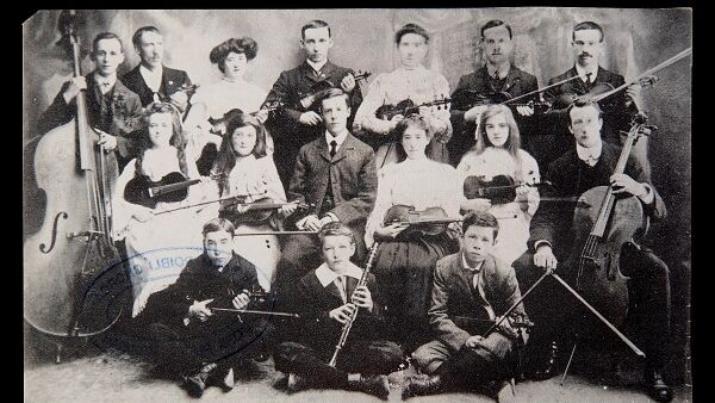 MacCurtain joined the Blackpool Orchestra, part of the Gaelic League, when he moved to Blackpool to go to the North Mon.
The formation of the Ulster Volunteer Force the following January, and the uncertainty in government policy that ensued, marked both a critical juncture point in that crisis, and, indirectly, a turning point in the life of Tomás MacCurtain.

Advanced nationalists drew the moral that the threat of force was a more effective weapon in dealing with the British Government than other forms of political action and proceeded with the creation of their own militia — the Irish Volunteers.

Tomás was unavoidably absent from the first meeting of the Volunteers in Dublin on November 25, 1913, as Patrick passed away on the very same day. Midst his grief, however, he somehow found a way to be involved in the planning for the inaugural meeting of the movement in Cork on 14 December.

As events turned out this was a chaotic affair, marred by a near riot, but once order had been restored over 200 men were enrolled, with Tomás appointed as secretary to the local Provisional Committee.

The following year was characterised initially by steady growth, followed by a rapid expansion in numbers in the late spring (as John Redmond encouraged his supporters, who up to then had been wary of the movement, to enrol).

There followed near catastrophe, as the organisation split apart following the outbreak of general European war in August 1914.

Tomás MacCurtain and many of the founding members of the Volunteers found themselves in the minority that opposed Redmond’s support for the British war effort — and effectively ostracised by large swathes of Cork society as a result.

The growing unpopularity of the war in 1915 provided a respite from such hostility, and the prominent involvement of the Irish Volunteers (with MacCurtain at the head of the Cork contingent) in the huge funeral held in Dublin on August 1 of that year for the veteran Cork Fenian, Jeremiah O’Donovan Rossa, seemed to some at least to indicate that the time was right for a military uprising against British rule.

A photo of Eilís and family members that was specially taken to send to Tomás in prison.

In the event that uprising in Dublin at Easter 1916, proved unsuccessful, with the problems experienced in Cork symptomatic of a wider set of difficulties facing those who wish to oust the British government from control over Irish affairs.

There is not space here to list the various orders, countermands, cancellations and other communications that eventually reached MacCurtain from Dublin in the days prior to Easter weekend.

Suffice it to note that he was entirely justified in taking the decision to dismiss the assembled Volunteers who had assembled in Cork on Easter Sunday at the end of the day’s manoeuvres — though he was haunted until the end of his days by the charge that, in so doing, he was helping to condemn the Dublin Volunteers to face the full might of the British Army in Ireland virtually on their own.

The subsequent loss of most of the weaponry held by the Cork Volunteers, seized by British forces in violation of the agreement that ensured the situation in the city was resolved without bloodshed, compounded the humiliation — a humiliation that was one of the factors that drove the IRA campaign to undreamed-of successes in the rebel city and county when the War of Independence commenced in 1919.

Despite not having been part of the fight in the Easter Rising, he was identified as a highly dangerous enemy of British rule in Ireland and spent most of the following 18 months detained in various locations at his majesty’s pleasure.

Wishing to avoid a similar fate when at liberty in the early months of 1918, he went on the run, and thus avoided the fate of fellow republicans who found themselves arrested as part of the so-called German Plot round-up.

This was a crucial part of his career, as he familiarised himself with the various units, locations and men (many of them new to the movement) that comprised the now resolutely republican Volunteer movement in Cork.

Had he so wished he would have been guaranteed a position as a candidate for Sinn Féin in the general election of December 1918, but he eschewed this option in favour of further work with the Volunteers. 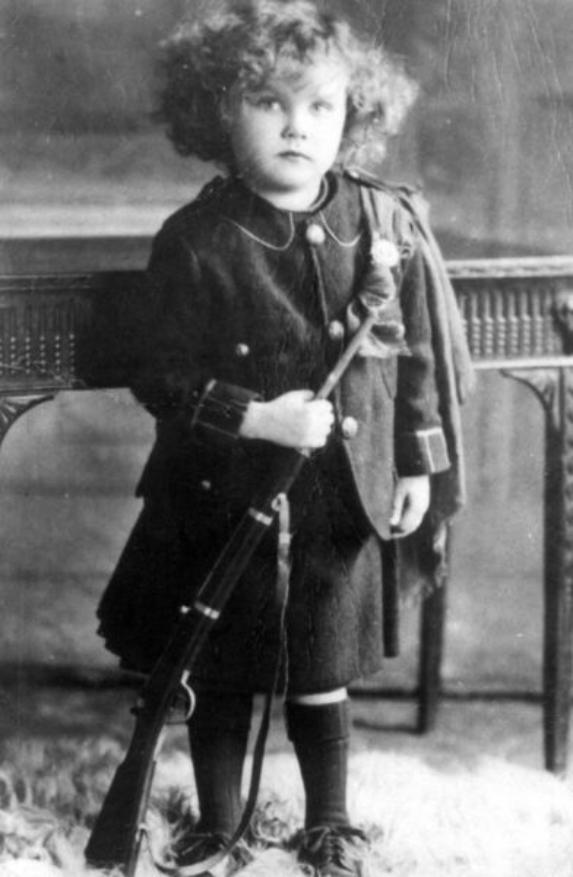 Tomás Óg MacCurtain, in a costume for a photo taken around the time of his fourth birthday.

Between recruiting, training and the acquisition of new weapons to replace those seized by the British three years before, 1919 was another relatively “low key” year that was fundamental to the successful onslaught that was subsequently waged by the Volunteers, starting in January of the following year with the successful attack on Carrigtwohill RIC barracks.

The same month marked the holding of the municipal elections in the country that had been postponed owing to the First World War.

With 40% of the vote in the North-West (Blackpool) ward, Tomás MacCurtain was elected on the first count, one of the 40 successful republican candidates elected to Cork corporation.

Elected to the position of Lord Mayor on 30 January, his first act was to propose, and have endorsed, a motion that the council should henceforth recognise Dáil Éireann as the only legitimate government in the country.

In the brief period he held office, he undertook several pioneering initiatives in connection with the civic and commercial life of the city, with the establishment of arbitration procedures to deal with industrial disputes symptomatic of his particular concern for the well-being of the all the inhabitants of the city.