The Irish Revolution: The Story Behind the Documentary

Landmark TV series looks at Ireland’s struggle for freedom by focusing on the part played by ordinary people throughout the country.

We’re used to viewing the story of Ireland’s struggle for freedom in a ‘top-down’ way through the prism of the lives of leading figures such as Maud Gonne, Michael Collins and Éamon De Valera. However, the fascinating documentary series on the War of Independence sets out to do the exact opƒposite.

It tells the story of this war as a movement of untold thousands of ordinary people based in parishes across the country.The War of Independence was fought by the Irish Republican Army against the British between 1919 and 1921 when the fighting stopped while a peace treaty was worked out. 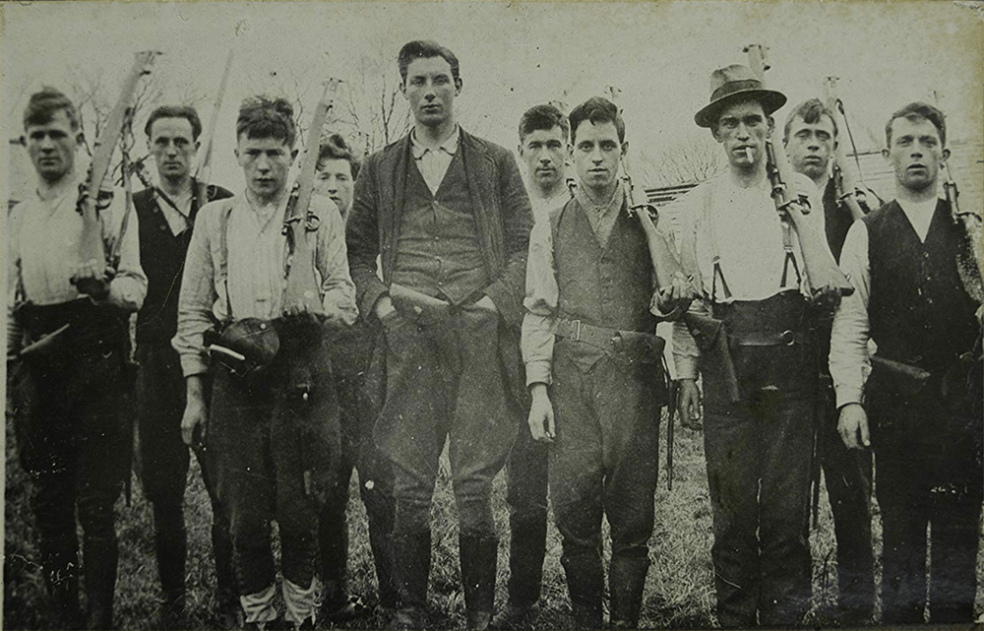 “The War of Independence is not just the story of Collins and De Valera. Usually when a story is told, it’s about a big figure like Michael Collins but what we really wanted to get across is that this is basically the story of a movement that was based in parishes and was organic,” explains Dr John Crowley, lecturer at UCC’s Department of Geography, who, along with colleagues Dr Donal O’Driscoll and Dr John Borgonovo of the School of History and cartographer Mike Murphy from the Department of Geography, acted as advisor to the three-part series which first aired in February 2019.

“We created a series of maps which show the mobilisation and radicalisation of the Irish population throughout the period. The maps show IRA companies in different areas around the country and the network of Cumann na mBan branches. In effect, our maps show the regional spread of these movements.”

The maps also illustrate the street-level devastation caused by incidents during the war, such as the Burning of Cork in December 1920: “The maps can show individual buildings which were burned. You can see the same from the attack on Lisburn — it is that detailed — at street and almost at building level.

“You can literally see where raids took place at street level in particular towns by using these maps.” And this is crucial, because, unlike the Easter Rising of 1916 which was based in Dublin, the War of Independence was also very much fought on a regional level, particularly across rural counties such as Cork, Tipperary, Limerick, and Clare.

“You get to see the destruction caused by the War of Independence. You get snapshots and a birds’ eye view which you wouldn’t normally get, right down to local areas because of the mapping process,” explains UCC’s Director of Cultural Projects Virgina Teehan, who along with Colm Crowley, head of RTÉ Cork, acted as executive producer to the series and spent three years developing it.

Ruán Magan, producer and writer/director of The Irish Revolution said: “The other interesting nugget is that we can see how those events affected everyone. The history we were taught in school came from the big personalities but this series is more about the ordinary people on the ground and how their lives changed. What we wanted to put across in the series, is that this is a people’s revolution.”

Magan boasts an enviable historical pedigree — his great granduncle was The O’Rahilly, one of the Irish Volunteers in the GPO during the Rising and also one of the leaders who died during it.He also takes pride in the fact his grandmother Sighle Humphreys was one of 20,000 Irish women who joined Cumann na mBan in the years afterwards. “She never let a day go by without talking about the struggle,” he recalls.

So, while the big names certainly feature in the series, what’s important to remember, he emphasises, are the ordinary people who played such a pivotal role. These included some 100,000 IRA members all over the country — of whom about 3,000 were actively involved in armed attacks, as well as 20,000 members of Cumann na mBan and untold numbers of others. “The key to winning was the people around the country who were constantly frustrating the British. “They didn’t serve them in shops or drive their trains. They were digging trenches in roads, cutting through communications systems and acting as spies and informers.

“We filmed all over the country and we went to huge effort to visualise the places where key events happened, for example Knocklong in Co Limerick where an RIC man was killed during a rescue attempt by the IRA of one of their members.”

The series also features the events at Kilmichael in Cork, where a convoy of auxiliaries was attacked by Tom Barry and where some auxiliaries were killed in controversial circumstances, and Lisburn, where the IRA assassinated an RIC inspector causing a massive backlash from loyalists.

The series, which is co-produced by Tyrone Productions and Create One in conjunction with UCC and RTÉ, is narrated by movie star Cillian Murphy and features the music of Pól Brennan of Clannad.

“We decided that, as the 1916 Rising was well covered, that we would focus on the War of Independence,” says Magan. “What comes out again and again is how focused the War of Independence was in the Munster counties of Tipperary, Clare, Limerick, Kerry but particularly in Cork. It’s believed one of the reasons for this is that many of those rebels were prepared to fight in 1916 but ‘stood down’ following receipt of a countermanding order during that period. However, many also felt a sense of shame for not fighting, Magan explains, and remained always at the ready. 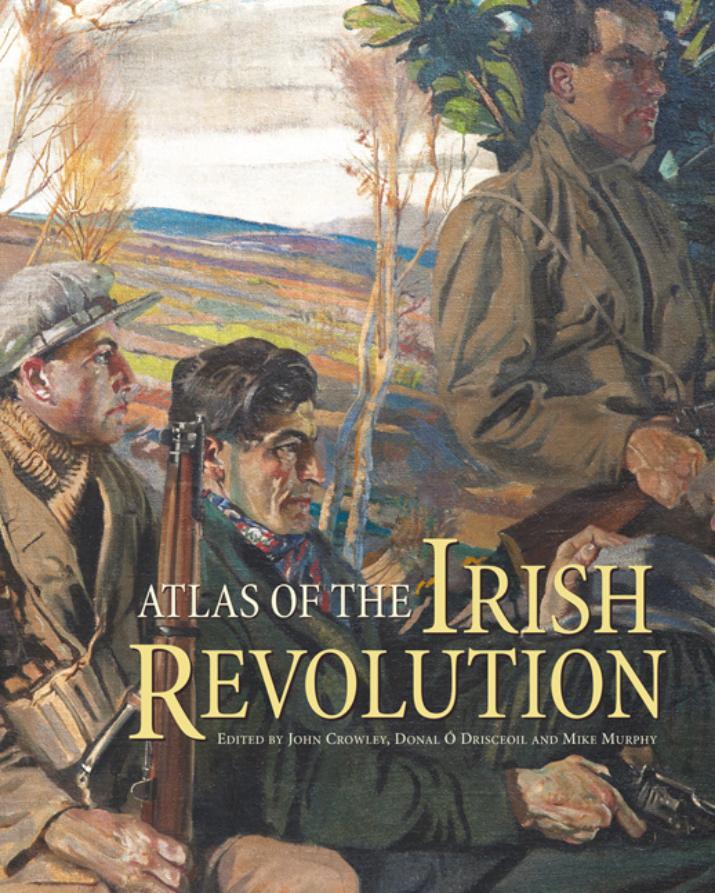 The documentary grew out of the hugely successful Atlas of the Irish Revolution, (UCC, 2017)

As part of their research for the documentary, Magan and his team consulted some of the most respected academics in Ireland, the UK and USA to tell the story, but also made room for the voices of ordinary people from the period: “The very interesting thing is that we also have the voices of people telling stories through interviews with witnesses of and participants in the War of Independence, which date from the 1970s and 80s.” The story comes from the perspective of participants and witnesses on both sides, he adds: “Many Catholics had joined the RIC and they took the brunt of the first stage of the war. “So effective was the IRA campaign against their own people that the RIC retreated from 400 of the 700 barracks around the country and their wives and children were boycotted and ostracised.

“It was a brutal and dirty war and we would be wrong to over-glamorise it; it was a necessary war but it was brutal. There were atrocities committed by both sides.

“It is fascinating because you’re looking at the most powerful empire in the world with the strong army in the world and an ill-armed rebel army managed to wear down the British and even force them to put up their hands and say they’d had enough. “It was all down to the guerrilla war approach. The IRA would attack and disappear into the hills again, and nationalists across the country were willing to protect and hide them. If the war had not had the support of the Irish people it wouldn’t have worked.”

Another crucial factor in the success of the War of Independence, he observes, was the emergence of a radical generation in the years previous to it: “From about 1910 you saw people in their 20s and 30s imagining a new Ireland. They were modern, they believed in feminism and women’s suffrage and socialism, and in an egalitarian society and sexual liberation.” Without that generation which included luminaries of the likes of pointing Terence McSwiney, Maud Gonne, Countess Markievicz and The O’Rahilly, Magan observes, neither the Easter Rising nor the War of Independence would have happened.

“This radical generation triggered it. They were dreamers who were willing to stand and demand that society change because society was very conservative at that time.

“Most people just wanted Home Rule and leave it at that but these people said ‘we can have so much more; Ireland could be a beacon of liberation and equality in the world.”

It’s been a hugely exciting project, says Teehan who has just moved from her current post in the President’s Office at UCC to take up the job of CEO at the National Heritage Council.

“The series successfully harnesses a huge public interest in Irish history while at the same time presenting research and scholarship in an accessible way to a very wide audience.”

“Traditionally history has been presented in books and when academics carry out research they normally produce a book. However, we are taking key information from the Atlas and presenting it in a visually attractive and very informative way for the wider public.” Concludes Crowley.

“This is a fantastic opportunity for people to engage with their history. History and geography have important contributions to make to the education of our young people. We are deeply concerned by the decision to make both of these subjects optional at Junior Cert level. People need to know about their own place; about its history and geography.”