The Decline of the Irish Parliamentary Party after the 1916 Rising

It is difficult to explain why the fortunes of the Irish Parliamentary Party declined so rapidly after 1916; the further one delves into the story, the more complicated and problematic it becomes.

In 1917 a pamphlet entitled The Germans in Cork was published by the Talbot Press in Dublin. The pamphlet was a satirical pastiche imagining letters that would have flowed from the desk of the German military governor of Cork in the event of a successful German military invasion of Ireland. In one of the letters the following remarks were passed as regards the standings of Irish political parties:

“At the opening of 1916, there were in Ireland three parties. Of the Nationalist and purely political party I need not say much. Their star was already setting. I should describe them in the words of the proverb, as ‘much cry and little wool.’ As a social reformer I regard all political parties with abhorrence, and – rightly or wrongly – I would dismiss the Nationalists as a pack of ‘schamers.’ On their tomb I would carve a homely crest – an axe rampant on a grindstone.” 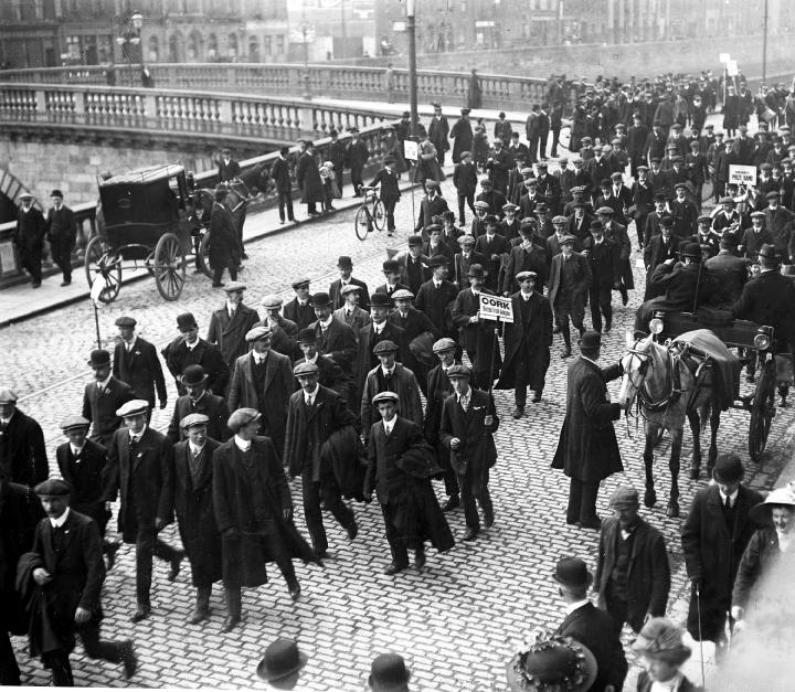 The decline in fortunes of the Irish Parliamentary Party (IPP) and its grassroots affiliates the United Irish League (UIL) and the Ancient Order of Hibernians (AOH) (collectively referred to as the Irish Party), culminating in the sweeping victory of Sinn Féin at the general election of December 1918, has been a question that has exercised generations of historians. Yet the further one delves into the story of this decline, the more complicated and problematic explanations for it become. In short, there is no easy way to describe how a party, which by Western European standards of the day had created a grip on nationalist politics in Ireland, was suddenly swept aside.

In truth, the grip of the Irish Party on the Irish nationalist community had been on the wane since the fall of Charles Stewart Parnell in 1890, and his death less than twelve months later. Rejuvenation under the chairmanship of John Redmond a decade later was temporary, for the sudden departure from the ranks of UIL founder William O’Brien and his supporters in 1903 precipitated a decade-long schism that was only resolved in 1909-10, with the infamous ‘Baton Convention’ and the founding of the All-for-Ireland League (AFIL). In 1910 the AFIL took control of the representation of Cork city and county. By 1914, however, the Irish Party had regained control of the county and city councils in Cork and was looking forward to sweeping the AFIL from their seats at Westminster. 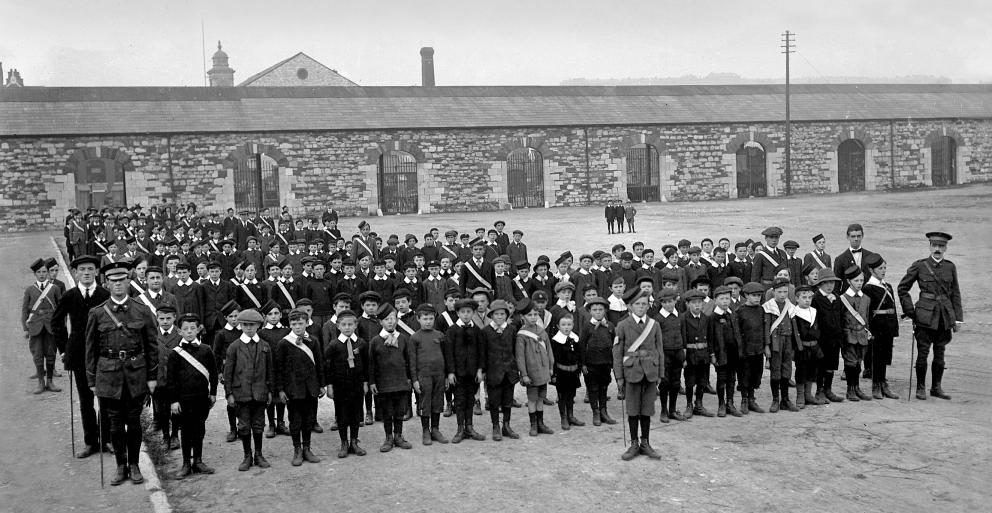 By this time, though, the paramilitary events of the ‘Ulster crisis’ had threatened the Party’s control of the grassroots. The foundation of the Irish Volunteers in 1913 necessitated a strategy of control, which precipitated a split in the movement between the Party-controlled National Volunteers and the more separatist-inclined Irish Volunteers. On Easter Monday 1916 it was the latter that occupied several buildings in Dublin and began a week-long struggle against the instruments of British control in Ireland.

The Easter Rising occurred in the context of World War One, where thousands of National Volunteers had gone to fight in answer to Redmond’s call. The war intensified animosity towards the Party and its policies of imperial cooperation with Britain, with the hope of gaining some measure of self-government for Ireland. This animosity was uncoordinated and sporadic to begin with, but grew in strength as authorities arrested hundreds of people in the wake of the suppression of the Rising.

A complex set of negotiations between all parties involved in Irish self-government, under the auspices of Chancellor of the Exchequer David Lloyd George, appeared to bear fruit in the summer of 1916. However, intransigence from the community of Unionists in southern Ireland (that is, outside Ulster) meant that the initiative collapsed.

In the autumn of 1916 the Irish Party won the West Cork by-election, following a split in the ranks of the AFIL. The election was notable, however, for the nomination of a recently-released prisoner, Frank Healy, by the AFIL. While separatists still in jail in England disowned Healy (there is a complex web of events related to this election regarding the struggle for control of Sinn Féin) there was no mistaking the growing support for new, fresh perspectives on the Irish question. In this context, it was similar in many respects to the late 1870s and the rise of Parnell and the IPP, building on the memory of 1867. Yet the radicalising influences of Ulster, the war and now the rising had changed the parameters completely.

1917 saw the effective collapse of the UIL and the sharp decline of the AOH as viable political entities outside pockets in Connacht and Ulster. Police reports for both ridings in Cork mention Sinn Féin as the only active political organisation in the city and county. Election victories for anti-Party candidates Count Plunkett, Eamon de Valera and Joseph McGuinness fuelled the drive of Sinn Féin. In October 1917 Sinn Féin held its first Ard Fheis, which approved a policy platform and organisation for the movement.

1918 saw the death of Redmond and the accession of Dillon as IPP chairman. Colonel Maurice Moore had warned him the previous year that Sinn Féin was taking serious hold in the country, but Dillon dismissed this as a result of “too much passion in the people” and ruled out a “contemptible imitation of Arthur Griffith’s policy”. Yet, by withdrawing from Westminster after conscription was introduced into Ireland, and by cooperating with Sinn Féin on platforms denouncing the measure, the Party began to lose its own identity. Many voters, old and new (the parliamentary franchise was extended at the start of the year) saw little difference in the policies expounded by both parties. Yet the youthful vigour and radical nature of Sinn Féin’s message seemed to resonate more with a war-weary people.

The growth of the ‘new unionism’ in labour politics also eroded the Party’s support base. Jim Larkin’s Irish Transport and General Workers’ Union (ITGWU) made significant progress in urban and rural Ireland, sweeping aside organisations such as the Land and Labour Association which had represented rural labourers, and which had supported the Irish Party.  The Labour party, founded in Clonmel in 1912, grew steadily after the Lockout and, by the end of 1916, had become a serious opponent to Sinn Féin in courting the anti-Irish Party vote.

Food shortages in 1917, and numerous strikes in Cork city, brought the lack of social control by the Irish Party into sharp focus. The Cork Food Control Committee (CFCC), founded by Cork Corporation in November 1917, was dominated by Party members, and was boycotted by Sinn Féin and the trades’ councils. Two months later a more broad-based People’s Food Committee (PFC) was founded, though boycotted by members of the CFCC. The PFC depended on assistance from the Irish Volunteers to carry out their program, which included boycotting exports of Irish produce to Britain via the ports.

This cooperation was enhanced during the conscription crisis of March-April 1918. Ironically, the wave of arrests after the ‘German plot’ against Sinn Féin only served to deepen their popularity, and further alienate those who were associated with the British state; this included the Irish Party. From the summer of 1918, hostility towards all state employees (including members of the RIC) grew in intensity.

Frustration with the conduct of the war, the heavy-handed nature of the response to the Easter Rising, and the yearning for fresh perspectives on old questions of self-government and social mobility all played into the hands of Sinn Féin.

Internecine strife between factions of the previous solid Party electorate from 1903 on weakened, at first imperceptibly, the structures of support on which the IPP at Westminster fed off and cultivated. Yet we cannot forget the roles that agency and contingency played in the fall of the Party from 1916 to 1918. In the end, a coalition of old radicals who had become conservative through their immersion in the British state had to cede control of the destiny of Ireland to a younger, militant, more radical coalition.

Previous Article
Back to Feature Articles