Running May - December 2019 in St Peters in Cork

Atlas of the Irish Revolution Exhibition opens in St Peters, Cork and will run until December 2019.

The Atlas of the Irish Revolution Exhibition opened in Cork City on 16 May 2019. The venue is St Peter’s Cork on North Main Street – an airy exhibition space, itself a polestar of the city’s medieval history. Cork City Council deputy Lord Mayor, Cllr. Thomas Moloney, formally opened the exhibition, which will run until December 2019. Admission is free.

This collaboration between University College Cork and LW Management Group who operate the St. Peter’s Cork venue, brings dynamic UCC scholarship into a unique public space in the heart of Cork city.  It is the latest public outreach effort by the Atlas of the Irish Revolution project, following the major documentary series earlier this year, The Irish Revolution, narrated by Cork film actor Cillian Murphy and produced by RTÉ Cork and UCC.

In relation to the exhibition, UCC Historian and Associate Editor of the Atlas, Dr John Borgonovo said:

The Atlas of the Irish Revolution was created to make cutting-edge scholarship accessible to the general public.  The editorial team is pleased that LW Management and Cork City Council Arts Office have offered us an opportunity to bring a selection of the book’s maps, posters, photos, and images into St Peter’s historic and evocative setting.

The exhibit is part of UCC President Patrick O’Shea’s vision to place the university, ‘firmly back in the public square’ through imaginative public engagement with the community.  UCC’s schools of history and geography intend to continue its public outreach program as we progress further into the ‘decade of centenaries”.

Images contributed by project partners such as the Irish Examiner Archives, the Crawford Gallery, the National Library of Ireland and Cork Archives; provide visual touchstones for the data expressed in the maps. This map, for example, shows the total casualties in Cork City between 1919 and 1921. 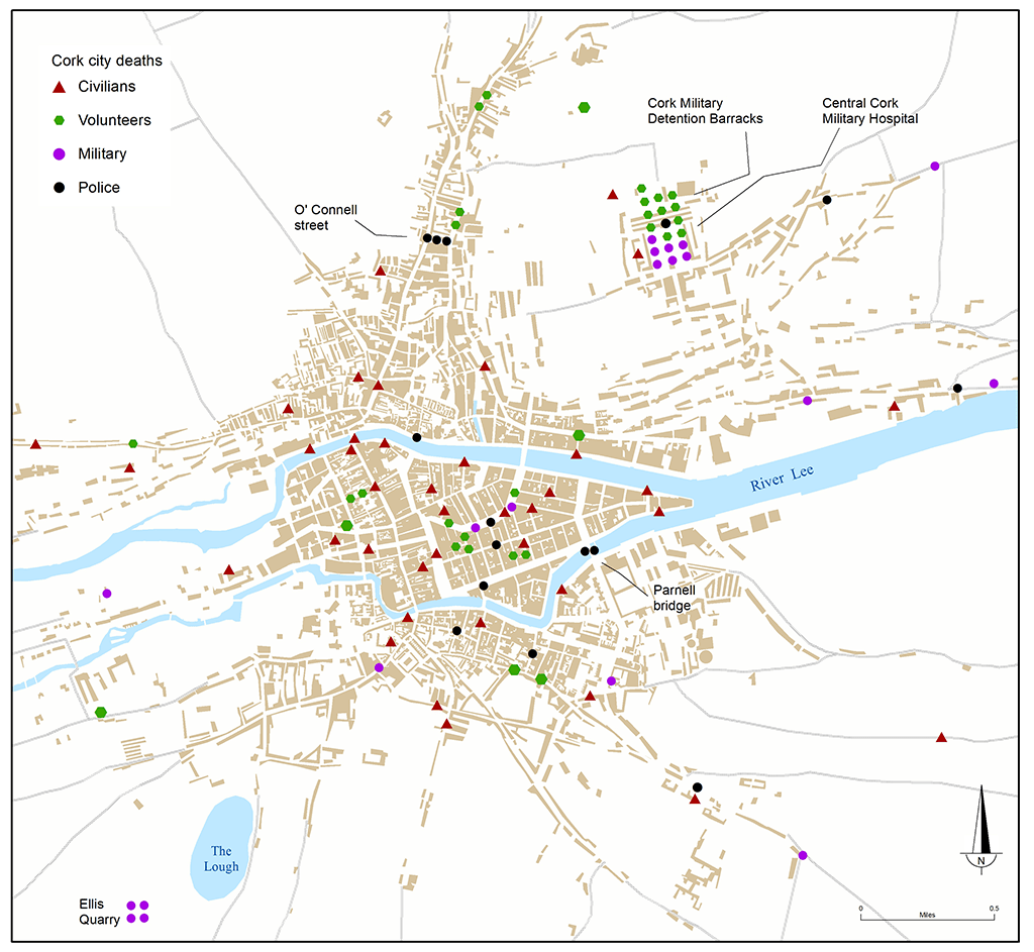 A key feature of the exhibition is a dedicated reading area where visitors can explore Cork University Press’s 5kg and 1,000-page book, which features over 100 essays, 300 maps, and hundreds of images. Visitors will also have the opportunity to view ‘The Irish Revolution’ documentary series on-site.  Throughout the year, St. Peter’s Cork and UCC will host several public lectures addressing various themes from the book.

The best-selling and award-winning Atlas of the Irish Revolution from Cork University Press and won the Bord Gáis Energy Book of the Year in 2017, is now in its fourth reprint with sales in excess of 20,000

As has been the case with all of the Atlas of the Irish Revolution projects, the exhibition is the result of effective collaboration and steadfast support. The book itself was a triumph of collaboration between the Schools of History and Geography in UCC, and Cork University Press, and the RTE documentary was born of cooperation between the state broadcaster and UCC.

The exhibition is delivered by UCC in partnership with LW Management, who manage St. Peter’s Cork, and is supported by the Cork City Council Arts Office.