The Viking Age was a period of unprecedented cultural impact and exchange with raiding, settlement and trade stretching from Greenland to the Middle East.  Scholarship on the Vikings is thus inherently international in perspective.  Yet, engagement with Viking heritage is generally local and community-specific. The World-Tree Project set out to map and interpret this shared Norse heritage through crowdsourcing at an international level, seeking to connect the local and the global and to tackle misconceptions about the period through dialogue.  Applying community collection methodologies to a field as international and interdisciplinary as Viking studies brought about new challenges. How can researchers engage a diverse public, with very different reasons for their interest in the Vikings?  What are the most effective methods for translating and exhibiting digital artefacts? Can the barriers of language, culture and access be overcome to create interdisciplinary resources that reflect the diversity of the Viking Age?  Ultimately, the research team investigated how digital technologies and crowdsourcing might facilitate knowledge exchange and revolutionise the study of the Viking past. These were the challenges that the World-Tree Project set out to address in the creation of the world’s first internationally crowdsourced collection on the Vikings.

Distinct phases of the World-Tree Project platform included development of collection strategies, solicitation and curation of digital artefacts, and the launch of a major educational platform. The team involved heritage organisations, museums, tourist boards, educational institutions and members of the public in Ireland, the United Kingdom, Denmark and Norway, who informed all phases of the Project. Engagement ranged from crowdsourcing user-submitted content, to the identification and translation of submitted materials, as well as ongoing collaboration in the design of the collection interface, in addition to attendance and participation at events, and, ultimately, through feedback and online discussions on showcased materials. Curation resulted in artefact descriptors, translations, metadata, and source permissions.  Interactive exhibits were formed to offer pathways through the collection and resources were created for students, ranging from primary school to undergraduate levels, and for special interest groups such as performers, tour guides, historians and teachers. Ultimately, the World-Tree Project’s open access repository and its refinement of community collection methodologies advances knowledge on crowdsourcing at an international level and its viability for engaged research projects.

New Knowledge Produced and Exchanged: The World-Tree Project collection consists of over 5,000 items submitted by more than 500 individuals and organisations from across Europe, which were collated, described and curated using the open-source and extensible Omeka platform to create an interactive, searchable repository of exhibits that are free to access and use for educational purposes. The reach has been significant: the collection has been accessed more than 54,000 times since its launch by users from around the world, its public-domain images shared by thousands on social media platforms, and its multi-lingual exhibits have been put to use by instructors in schools and universities. Through integrated social media campaigns, including Facebook and Twitter, the Project has reached a global audience and tapped into a network of Viking interest groups that are often overlooked in the academic discourse or unaware of each other’s activities. Posts regularly reached audiences of several thousand, and provided focal points for discussing how the Vikings are received and interpreted in different parts of the world today.

The Project culminated with a livestreamed conference, Rediscovering the Vikings, which reached a global audience when the Project’s hashtag, #RediscoveringVikings, trended on Twitter. Thirty-four speakers from 12 countries presented at the conference, which was attended by 100 delegates, and featured interactive workshops, craft displays, a reading from renowned children’s author, Kevin Crossley-Holland, and a demonstration by guest artist Mirosław Kuźma. The conference proceedings are being published as a collection, Reimagining the Vikings, for the Northern Medieval World series of The University Press at Kalamazoo. Additional publications are in preparation for Digital Medievalist and in press for a special edition of Studies in Medieval and Renaissance Teaching.

New Collaborations through Broad Stakeholder Involvement: Researchers engaged stakeholders at every level of the Project’s development, putting communities in contact with one another, facilitating dialogue through social media, and encouraging a unique group of Norse scholars, heritage experts and enthusiasts to rediscover the Vikings together. An active programme of engagement ensured that the Project was responding to the needs of instructors in the field of Old Norse Viking Studies, and that dialogue was fostered between communities. Over the course of the Project, researchers engaged colleagues and members of the public through an active programme which included presentations and a travelling exhibit in Ireland, Wales, the United Kingdom, Spain and the United States, which offered international exposure and played a major role in recruiting collaborators to the online collection.  The Project tested the most effective methods for tapping the expertise, enthusiasm and knowledge that exists among the wider public and pioneered strategies for remote crowdsourcing at a European level, building on the Oxford model for engaged community collection.

The World-Tree Project aimed to connect the local with the international, and the Project team engaged Irish partners at many levels, from collaborations with Munster museums and schools, to presentations and meetings with heritage organisations.  Members of Waterford’s Déise Medieval summed up the benefits of this open-ended dialogue after attending the World-Tree Conference: “The academic community are doing wonderful work and making it accessible to us .... what can and should we do in return?” This spirit of collaboration and the trust fostered will have an important legacy, not only through constant refinement of the Project’s online educational platform, but in the ways this established network promotes Ireland’s Norse heritage, within and beyond academia.

Extensive print and broadcast media celebrated the Project and its launch, including ADDCRC Radio; The Irish Times; The Irish Sun; The Irish Examiner; The Irish World; The Irish Post; The Evening Echo; Idea Connection (Canada); Irish Central; West Cork People; The Southern Star; and a feature on ABC's ‘Nightlife’ with Sarah MacDonald for Australian Public Radio. This engagement resulted in material being added to the archive from local and international contributors, and gave researchers the opportunity to share current research on the Vikings with a wider public, gaining valuable knowledge in return.  The Irish Research Council chose the Project as one of the spotlight questions to mark Science Week 2017, asking, “Can crowdsourcing help us discover more about our Viking past?” in an outdoor light display at Dublin City Council. 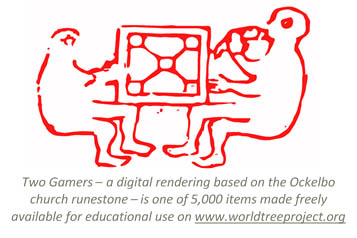 Ongoing Use of the Open Access Repository and Free Educational Resources: The challenge of effectively translating and exhibiting resources for such a diverse audience was met by tailoring exhibits for unique communities and educational settings and presenting multiple pathways through the collection. The major output – the World-Tree Project archive and its educational exhibitions – will continue to be used extensively in teaching and research, both in Ireland and internationally, and have already been integrated into taught courses at University College Cork and adopted by instructors worldwide. The development of new strategies for international collection and the testing of different avenues for online engagement are the World-Tree Project’s main contributions to knowledge, and will form the basis of future publications analysing the collected data and methodologies. Ultimately, the World-Tree Project tested a model for community involvement that has the potential to revolutionise the way we research, develop resources for the study of the medieval past and investigate the widespread influence of the Vikings on our shared culture today.

Career Progression and Continuing Transdisciplinary Investigations Fostered: Participation in this Project has had a significant and demonstrable impact on the careers of the Project team, including early career researchers. Dr Roderick Dale gained invaluable experience in community engagement and digital heritage database management and, as a direct result, was asked to join the successful AHRC funding bid for the 'Bringing Vikings back to the East Midlands' project. He is now Cultural Engagement Fellow at the University of Nottingham, developing a regional engagement strategy and supporting the 'Viking: Rediscover the Legend' exhibition, a Yorkshire Museum and British Museum partnership. A successful application for a second post-doctoral research position in the field of Old Norse-Viking Studies at University College Cork was made by a colleague from Uppsala, Sweden, which demonstrates increased capacity to attract international research talent to Ireland due to the World-Tree Project. Dr Sarah Baccianti, whose part-time lecturership was funded by the project, was successful in her application for a full-time lecturership at Queen’s University in Belfast, and has since been awarded a British Academy Newton International Fellowship.

A final major outcome has been the attention, at national and international levels, on the significance of research at University College Cork on the Vikings and their legacy within Europe, establishing the School of English and the University at the centre of international discourse. For example, the Honorary Consul for the Danish Embassy attended the conference, and the Norwegian ambassador, Else Berit Eikeland, has held a series of meetings with the Project team to discuss future promotion of the Vikings and Norse heritage in Ireland and its implications on tourism. Today, University College Cork is a recognised center for both the study of the Viking Age and for large-scale digital humanities projects.