An aerial photograph of Burriscarra friary and parish church captured by drone during fieldwork in Co. Mayo, May 2018

At a time when the destruction of cultural heritage is used as an ideological weapon, surveying and understanding medieval monuments and those who built them are necessary to ensure the survival of these monuments for future generations and as a way to promote and protect cultural heritage and its significance to our society. This project endeavours to do that through a multidisciplinary study of the physical remains of medieval Augustinian friaries in Ireland. In the Middle Ages, the mendicant orders, and among them the Augustinian friars, revolutionized the way people experienced their faith and practiced religion. Their friaries helped in shaping the physical landscapes of towns and countryside, and their enduring connection to local communities played a crucial role in the history of medieval religion and of post-Reformation Europe. Yet in Ireland, the remains of Augustinian friaries are rarely known outside their locality. What impact did these friaries have on their environment, physically, economically and socially? What was the extent of the friars’ impact on late medieval Irish society? And how does the Irish evidence compare to the friars’ legacy elsewhere in Europe?  In answering these questions, the project aims to highlight a significant link that Augustinian friaries represent between present-day local communities and their past. The project also shows the meaningful place of the friaries in the history of Irish society, culture and religion and in the historical and architectural heritage Ireland shares with other European countries.

The project is funded by the Irish Research Council as a Government of Ireland Postdoctoral Fellowship. It involves three key objectives: the review of existing scholarship and methodologies; the survey of all sites where remains of the friaries exist (with an architectural, archaeological and spatial analysis of the buildings and their surroundings, and the laser scanning and drone survey of Burriscarra friary, Co. Mayo in May 2018, in collaboration with the Discovery Programme, Ireland’s Centre for Archaeology and Innovation and with the support of Mayo heritage officer); and the dissemination of research, through participation in conferences, talks and seminars, the publication of two articles in peer-reviewed journals, and the organisation of a one-day international and multidisciplinary symposium, exploring the theme of marginality and the mendicant orders. Finally, community outreach has been a crucial element of the project from the beginning, with the involvement of the Burriscarra local community during the fieldwork and the National Heritage Week 2018, when results of the survey were presented.

New knowledge produced and exchanged: The study and interpretation of the data collected during fieldwork, including photographs, ground plans, drone imagery and laser-scan data, have led to a significant increase of our knowledge and understanding of the physical remains of Augustinian friaries. The analysis of the data collected at Burriscarra friary also identified further questions and areas of research, such as the need for a full geophysical survey to be conducted at the site. Specific outputs have been chosen to share this new knowledge with both academic and lay audiences:

An isometric view of the laser-scan data of Burriscarra friary. Image courtesy of the Discovery Programme

International knowledge exchange and connections: One of the key outcomes of the project has been an increased awareness about the wealth of Ireland’s mendicant architectural heritage outside Ireland. The project has also led to new collaborations and connections with international expertise which will further benefit UCC by leading to an exchange of personnel and ideas. The following outputs have increased and will continue to increase UCC’s international profile in the area of wider medieval studies:

“By looking at a small group of a major socio-religious mendicant movement, the project addresses the issues of marginality, the place of peripheral groups within a larger socio-political landscape, the relationship between space and society, and the relationship between spiritual providers and social fabric. All these concerns resonate nowadays and are current in international scholarship.” 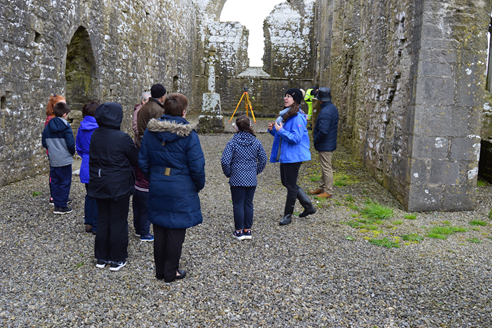 A tour of Buriscarra friary was organized while the laser-scanning survey was taking place in May 2018.

Cultural and educational impact, and capacity building: The project has led to the increased public knowledge and appreciation of the cultural value of the architectural heritage represented by Augustinian friaries, and to the fostering of heritage ownership among local communities. Outputs such as the research blog have increased the level of engagement of the public with academic research. As shown by Fáilte Ireland’s recent launch of Ireland’s Ancient East and Hidden Heartlands schemes, tourism stakeholders recognise the role of historical and architectural heritage. In this respect, the project’s public outputs have helped in promoting cultural tourism at lesser-known monastic sites across the country, which in the medium to long term could have a positive economic impact on local communities, increasing revenue linked to tourism in regions where friaries are located:

Relevance of the project to UCC strategic goals: The project is aligned with UCC’s strategic goals by delivering an innovative research that is both community-based and international in its scope as well as by sharing the project’s findings through teaching. Dr Lafaye has contributed to undergraduate and postgraduates research-led teaching and presented the students with the multidisciplinary approach successfully adopted by the research:

For more information about the project see https://irishmedievalfriaries.wordpress.com/, or contact Dr Anne-Julie Lafaye at annejulie.lafaye@ucc.ie or https://twitter.com/AnneJuClemence