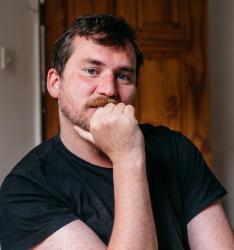 In December 2020 Dr Edward Molloy from the School of English and Digital Humanities in the College received the IRC’ s prestigious Maurice J Bric Medal of Excellence for being the top-ranked AHSS postdoctoral researcher to the 2020 IRC Government of Ireland Postdoctoral Fellowship call.

Dr Mollloy’s postdoctoral fellowship research project (Between History and Revolution: Radical Irish Separatism from Tone to Pearse´) re-evaluates the intellectual underpinning of Irish nationalism in the long nineteenth century through reading the works of prominent Irish nationalists to excavate the justifications that they use for their assertions of the right of Ireland to be independent of Britain. Dr Molloy also looks at the memoirs, novels, newspapers, pamphlets and plays produced by the nationalist movement from the 1790s to 1916.

According to Dr. Molloy, two types of argument for Irish independence can be discerned. One is based on a language of rights largely inherited from liberal revolutionary traditions from Ireland, England, America and France. These arguments usually follow from the idea that people are imbued with natural rights that entitle them as individuals to political equality and access to democratic representation, against claims that there is any basis for inherited power or privilege.

The other major type of argument used in this period is one based on the idea that Ireland exists as an historical entity and that this is the basis of its independent existence. This relies not on a claim to individual rights, but rather that the historic right of nations to govern themselves is the basis of the moral and political order. The central aim of this project is to demonstrate how the different iterations of advanced nationalist movements in Ireland during the long nineteenth century perform a modulation between these two poles of argumentation

In comments after receiving the award Dr Molloy noted:

The award of the Maurice J. Bric Medal of Excellence came as a great surprise to me and I feel really privileged for my work to have been recognised as possessing interdisciplinary value and rigour. This is a massive encouragement in what can at times be a rather dispiriting sector, so I am really grateful for this award and the recognition it brings.

The School of English and Digital Humanities, UCC is very proud to be hosting the winner of the Maurice J. Bric Medal of Excellence award for the second year in a row and congratulates Dr Eddie Molloy on his winning of this prestigious award. His mentor, Dr Heather Laird, commented that 'Dr Molloy is an impressive early career scholar whose comparative research on the intellectual underpinnings of radical Irish nationalism in the long nineteenth century will have impact across disciplinary boundaries.

Director of the Irish Research Council, Peter Brown congratulated this year’s winners: “Our annual Researcher of the Year awards are about recognising the very best and brightest of the Council’s current and former awardees. The standard this year was exceedingly high, and the judging panel found it difficult in many cases to choose a winner, which is a testament to the high calibre of researchers we have here in Ireland.

“We launched our five-year strategic plan this year and supporting excellent ideas and talent across all disciplines is at the heart of the Council’s mandate. Having a vibrant research community, and fostering public support for research is vital, as we continue to see the positive impact it has on society, the environment, and the economy. This is particularly true in the case of our three winners this year, who have all individually made an impact on society through their research.

“We are very proud of all of our awardees and I look forward to seeing what comes next for them.”

Dr Molloy joins UCC from the University of Liverpool Institute of Irish Studies where he was a Busteed Postdoctoral Scholar in 2018 and college lecturer in 2019. He has published his work in Interventions: International Journal of Postcolonial Studies, Identities: Global Studies in Culture and Power, Irish Political Studies and, most recently, Victorian Periodicals Review.

A profile of Dr Molloy and all postdoctoral researchers in the College can be viewed on the College Research website.