Through the lens of the secret police: Images from the religious underground in Eastern Europe

Dr James Kapalo (Senior Lecturer Study of Religions Department) and Dr Gabriela Nicolescu (Postdoctoral Researchers Hidden Galleries project)  have opened an exhibition featuring materials and items collected and analysed as part of the ERC funded Hidden Galleries project on Friday 9th October 2020 in the Boole Library, UCC. The exhibition will run from October 9th until March 31st 2021, Boole Library, University College Cork (Library opening times are available at: www.ligbuides.ucc.ie/aboutus/openinghours in line with Govt guidelines only 2 people at a time are 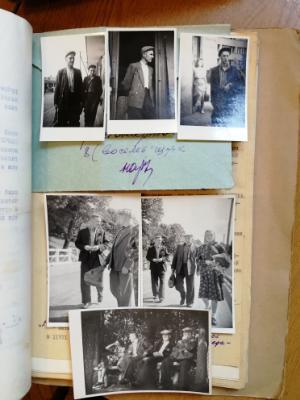 allowed into the exhibition space).

Funded by the European Research Council and based in the Study of Religions Department, Hidden Galleries (ERC project no. 677355) concerns the role of religious minorities in the transformation of Central and Eastern Europe societies in the 20th century seen through the prism of the secret police archives in the region.

The exhibition, “Through the lens of the secret police: Images from the religious underground in Eastern Europe”, explores the legacy of secret police operations against and surveillance of religion through a visual cultural lens. Comprised of photographs shot or stolen by the secret police in the Soviet Union, Romania and Hungary, the images in the exhibition are sometimes violent or intrusive, at other times personal or with a documentary quality. The materials on display, which were used at the time as evidence of crimes and in anti-religious propaganda, today prompt varied interpretations. Can these photographs escape the categories of the archives into which they were placed? Who should have control over the use of these materials today? What impact does it have to view someone through the lens of the secret police?

The exhibition is accompanied by the publication of a book Hidden Galleries: Material Religion in the Secret Police Archives in Central and Eastern Europe co-edited by Tatiana Vagramenko and James Kapaló, that presents in a series of short essays selected examples from the Hidden Galleries Digital Archive (see below) and exhibitions. Describing the book as “a true publishing event” Cristina Văţulescu (New York University)  expert in Soviet-era cultural expression and the secret police argues that the book “gives us an unprecedented window into a diversity of religious practices and their state repression…. Hidden Galleries sets a new scholarly and ethical standard for research in the secret police archives”.

Other outputs from the four-year Hidden Galleries project include the Digital Archive. This focusses on the creative practices and visual materials produced by and about religious groups that formed the religious underground during periods of totalitarian rule. Featuring rarely seen and difficult to locate materials, the Digital Archive is designed to encourage comparative, cross-cultural research on creative responses to repression in the twentieth century as well as serving to reconnect religious communities with aspects of their lost cultural and sacred patrimony. The collection not only features photographs, icons, brochures, drawings, letters, hymns and diaries confiscated from banned religious communities but also secret police representations of the religious underground in the form of photographs, maps, illustrations and network schemes designed to incriminate and visualise the hidden and secretive enemies of the state.

“This exhibition provides an opportunity to engage with the tremendous research undertaken by James Kapalo and the Hidden Galleries team enabled by the prestigious ERC award – I would like to congratulate the team on the powerful, scholarly work they have undertaken providing unique insight into very challenging human experiences. “ said Professor Anita Maguire, Vice President for Research and Innovation at UCC .

Speaking at the opening of the Hidden Galleries  exhibition Professor Chris Williams Head of the College of Arts, Celtic Studies and Social Sciences (CACSSS) commented “This is a wonderful piece of historical research by the team….the materials presented in this exhibition are a wonderful testament to the importance of freedom of conscience in twentieth and twenty first century societies”.

Having toured the exhibition Dr Helena Buffery Vice Head for Research and Innovation CACSSS spoke of the College’s delight at being “able to host the fruits of the Hidden Galleries research here in UCC… thank you on behalf of the entire research community in UCC, this is an incredible achievement”.

To  view the images and narratives in the exhibition explore the Hidden Galleries Digital Archive: http://hiddengalleries.eu/digitalarchive

To see a short video about the Hidden Galleries exhibition in the Boole: