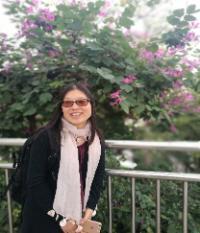 UCC postdoctoral researcher Dr Lijuan Qian in the Dept of Music has been awarded €1.5 million Starter Grant from the European Research Council. Dr Qian (pictured) has worked on successive fellowships (an IRC Government of Ireland postdoctoral fellowship [2015-17] and an MSCA CoFund CAROLINE fellowship [2017-21]) on popular music and television, cultural heritage, and ethnomusicology in contemporary China (see photo below taken on fieldwork in Yunnan province in Southwest China). Dr Qian received her PhD in Ethnomusicology at the University of Sheffield in 2011 and a MA in Musicology at the Shanghai Conservatory of Music in 2005. Her work examines mass aesthetics and popular music in China, and she has published a monograph and several articles in the field (for details see here). Lijuan is also the award holder of various grants including: CAROLINE, IRC postdoctoral Fellowship; The Scientific Research Foundation from China State Education Ministry; ORSAS from British Government, and University Studentship and Excellence Exchange Scheme from University of Sheffield. 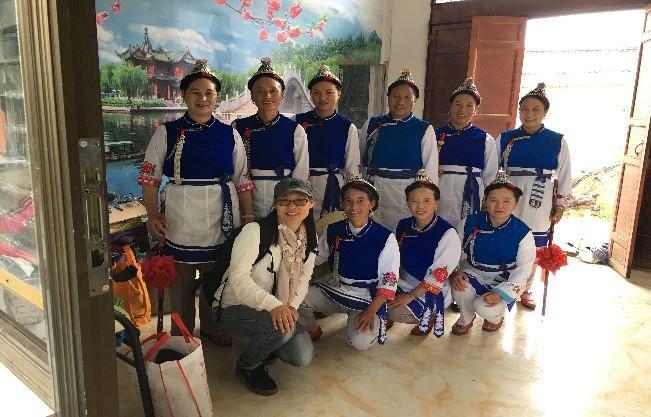 Dr Qian’s ERC Starter project – ECura – confronts the specific challenge of how members of remote communities are being impacted by the spread of new digital media technologies. Working in collaboration with members of three villages from China’s multi-ethnic Southwest (see Fig. 3), the research team will seek out ways to empower community members to take up the new digital technologies to become active collectors and curators of their traditional music and dance. The research includes the development of software apps that use straightforward symbols and Indigenous-language voice commands, enabling all villagers to readily record and share their own songs and other musical heritage digitally, and the creation of an online database dedicated to their artistry. The resulting research framework will be transferable to a broad cross-section of endangered cultures globally. 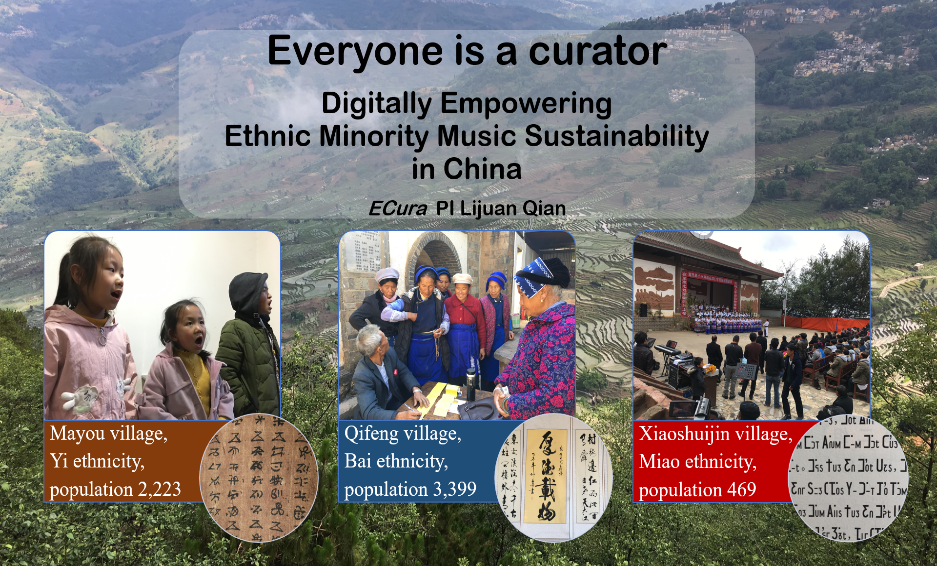 On hearing the news the Head of the School of Film, Music and Theatre, Professor Laura Rascaroli said

“I’m delighted to congratulate our colleague Dr Lijuan Qian on her success in securing an ERC Starter Grant Award. This path-breaking project is exactly work of the sort that the ERC is designed to support and on behalf of all my colleagues in the School I wish Dr Qian and her collaborators every success with it. The level of cultural engagement that this project represents is exemplary and reflects a central element of the School’s mission. I hope therefore that we will be able to lend it all possible support and encouragement.

“Nothing succeeds like success: this is the second ERC project to be hosted in our School and it will do much to raise our profile as a lively and nurturing research environment even further.

“The School is immensely grateful for the support provided by the College of Arts, Celtic Studies and Social Sciences, the University and the national contact points for the ERC in applications like this and looks forward to engaging actively with any researchers who would like to venture down this path.”

The Head of the College of Arts, Celtic Studies and Social Sciences Professor Chris Williams welcomed this news saying:

“This award speaks to Dr Lijuan Qian’s outstanding research profile and track record as well as her commitment to cutting-edge research practice with truly international impact.

The ECura project exemplifies the College’s critical contribution to the University’s overall strategic objective to distinguish itself as a leading research-intensive institution of international standing, it is a wonderful example of the radical and exciting work in the Humanities at UCC.”

“I’d like to congratulate Dr. Lijuan Qian on securing such highly competitive and prestigious ERC Award. It addresses innovative societal questions concerning the use of technology for the sustainability of cultural heritage within ethnic minorities.”