The award was presented for the second time in the Aula Maxima, UCC on Monday 27th November 2017 as part of the annual Process & Chemical Engineering Awards Night.

The award is for the best individual design memo, as part of the Final Year Design Project. Jean O'Driscoll, the 2017 winner completed a design memo for a Biotrickling Filter as part of the overall best Design Project entitled "A Facility for a Circular Economy Concept from Waste to Food and Energy." This project was also submitted to IChemE for consideration for a Mcnab-Lacey Award, which is awarded annually to the undergraduate student design project team whose design project submission best shows how chemical engineering practice can contribute to a more sustainable world.

Declan Leonard, Engineering Manager at PM Group presented the award to Jean O'Driscoll from the Class of 2017. Jean was presented with a €1,000 bursary in addition to a commemorative medal. Peter O'Sullivan, Process Group Manager, Philip Healy and Michael O'Driscoll of PM Group were also in attendance, as well as one of our graduate employees, Shane McDonald, who was presented with the Abbvie Award on the same night.

The Department of Process & Chemical Engineering is greatly indebted to PM Group for their continuous support of our students, graduates and programmes. 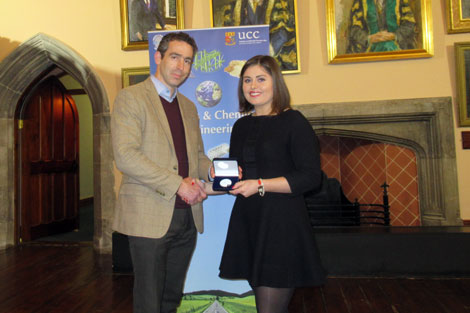