Congratulations to Rehan Ali, a final year BSc Neuroscience student in the Department of Anatomy and Neuroscience UCC, winner of the 2021 Virgin Media Discovers & Screen Ireland Short Film Competition. Rehan's winning entry Water Under the Bridge was described by competition judge award-winning director and screenwriter Lenny Abrahamson as having a ‘really clear vision’ with 'very original themes' and 'above all was just really good and really interesting!'

'When I first applied to the Virgin Media Discovers Short Film Competition in November 2020, I realised that the competition was incredibly tough', Rehan Ali explains, 'although I recognised the importance of the story that I wanted to tell, I knew that it would be a very difficult road to win the fund. It was 20 minutes before my end of term Neuropharmacology exam that I got a call from Virgin Media letting me know that I was shortlisted. Safe to say, it was a difficult exam to get through'.

From an initial entry of over 600 submitted scripts on the theme 'discover different’, Rehan Ali’s Water Under the Bridge was among 10 shortlisted entrants who each received €9,000 and six weeks to develop their scripts to compete for the overall prize. 'As excited as I was, it was also quite intimidating to keep up with my BSc Neuroscience studies while also developing my script to get it ready to be pitched to a panel of industry professionals', Rehan explains 'however, my mentor, the incredible Lee Magiday, producer of films including The Lobster (2015) and The Favourite (2018), helped to navigate me to the end. It was a great honour to work with her and to learn so much under her guidance, and somehow I managed to meet all deadlines!'

'I never expected my first script pitch would be in front of such a distinguished group of professionals' Rehan admits, 'after a week of unbearable waiting', on March 14th 2021 on a special episode of the Box Office show on Virgin Media, Lenny Abrahamson announced Water Under the Bridge by Rehan Ali as winner of the 2021 Virgin Media Discovers & Screen Ireland Short Film Competition along with Allie O’Rourke and Becky Cheatle for their project Punch Line. 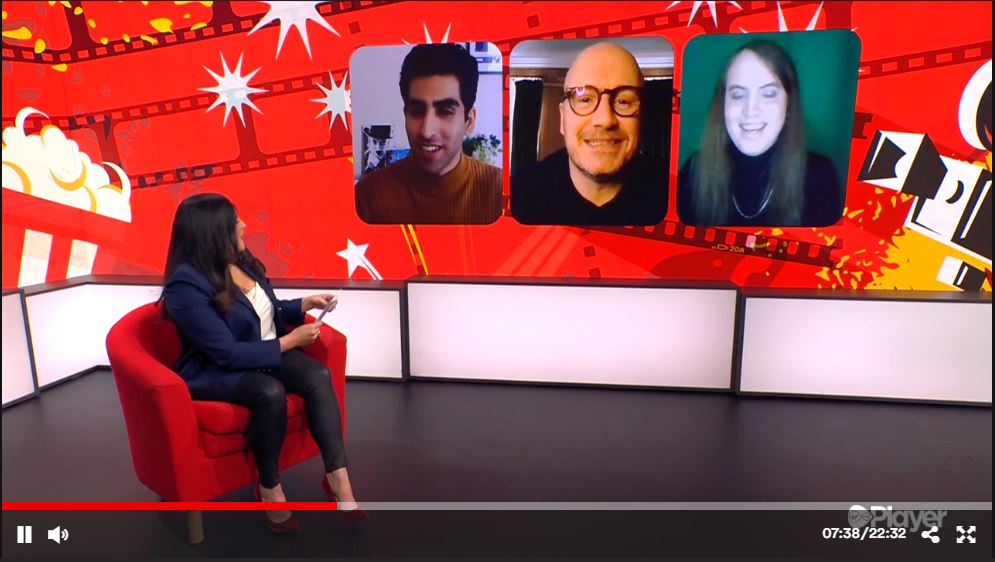 With the prize of a production budget of €30,000 to create his 10 minute short film, Rehan is currently busy working with his production team and hopes to get his film Water Under the Bridge into production by June 2021, Covid-19 dependant of course!

Rehan describes how he is 'excited to be able to shoot this film in Carrick-on-Suir, his hometown', where he spent ten years growing up in Bridgewater House, a Direct Provision centre. 'It is an incredibly important, meaningful and poignant story and will fit perfectly into the beautiful landscape of the town'.

Rehan's winning script is a coming of age story from the perspective of a young immigrant. Having left Pakistan with his own family when only six years of age and spending a large portion of his life as a Direct Provision resident, Rehan knows that 'the journey of an asylum seeker doesn’t just consist of one struggle, although it may be perceived as such from the outside. It is a relentless journey of many struggles'.

Rehan explains 'We meet a teenager called Bilal who has just arrived in a Direct Provision hostel along with his father and baby sister. Then, very much like Rehan did 16 years ago, Bilal eventually escapes the confining walls of the hostel in an attempt to explore, for the very first time, the town he must now call his new home. He meets local teenagers who introduce him to this new world. However, this new world poses new challenges for Bilal. The greatest one being perhaps his own inability to acknowledge who he is. He is thrown further into the depths of this different world, struggling to keep afloat.'

2021 has been a busy year for Rehan, 'My caffeine intake has definitely spiked upwards while my time sleeping has seen a steep decline. However, all of the work and pressure has been worth it, and I truly wouldn’t have it any other way. In fact, a lot of the academic skills that I acquired through my Neuroscience studies benefitted me greatly when I was writing my script and constructing my lookbook for the competition. My studies on the human brain and the impact that personal experiences have on it, aided me in better understanding the mental trauma that my protagonist, Bilal, suffered'. Rehan also credits the skills which he developed presenting critiques of Neuroscience journal papers to his peers and academic staff as having helped him when pitching his own script to the judges at the final of the 2021 Virgin Media Discovers & Screen Ireland Short Film Competition.

The completed film Water Under the Bridge will be broadcast in autumn 2021 on Virgin Media Television, Virgin Media on Demand and as part of the Virgin Media Dublin International Film Festival 2021 programme of events.

Rehan is hoping to work with new acting talent for this project. He especially welcomes young actors with experience of the Direct Provision system who would like to be considered for the lead, to reach out to him via his email waterunderthebridgeshortfilm@gmail.com. Or directly over any social media at @rehanalirq. 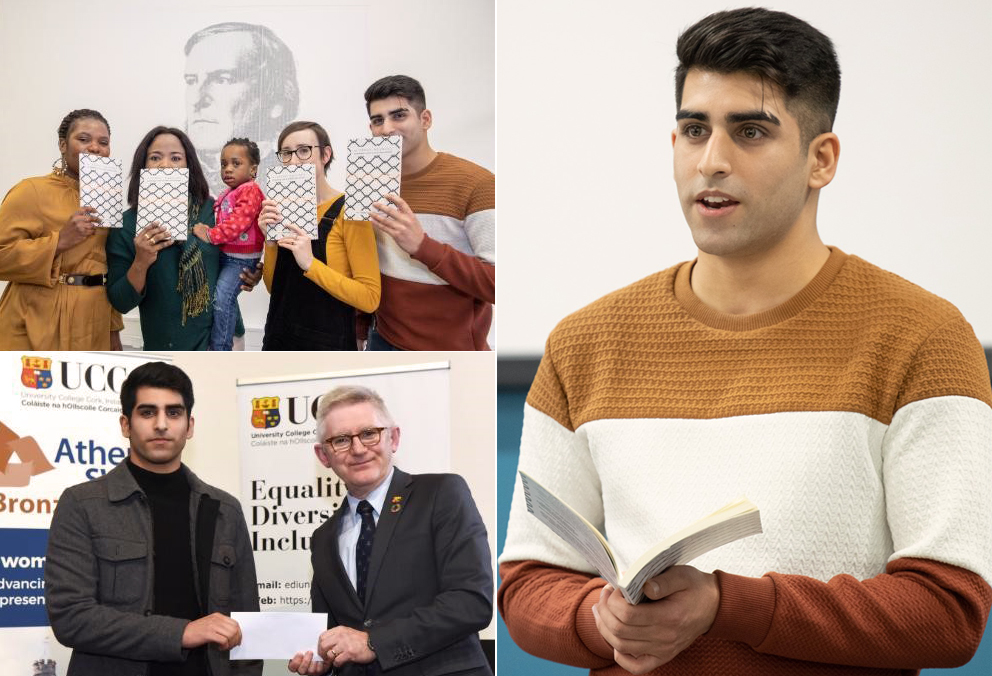 University College Cork has already spotted Rehan’s artistic talents. In 2020 Rehan Ali was awarded the prestigious title of Puttnam Scholar 2020-21. The Puttnam Scholarship programme offers UCC students from any discipline the opportunity to work with and learn from digital education pioneer and Oscar-winning producer Lord David Puttnam. Rehan explains how 'learning about filmmaking and storytelling from Lord Puttnam has been such an honour and I believe I have taken what I have learned directly from him into writing Water Under the Bridge'.

In 2019 Rehan Ali was awarded the Narratives of Equality, Diversity and Inclusion Award by UCC President Patrick O'Shea for his essay entitled What's in a name? https://www.ucc.ie/en/edi/equalitycommittee/narratives/

2019 also saw Rehan Ali's essay What's in a name? published in the book Correspondences – A Call to End Direct Provision in Ireland edited by Stephen Rea and Jessica Traynor, and launched in Smock Alley Theatre Dublin.  At the Cork launch of the book in UCC in February 2020 Rehan was invited to read his contribution What's in a name?. Correspondances is an anthology which pairs writers, photographers and visual artists in the direct provision system in Ireland with Irish artists and writers. http://www.dublincityofliterature.ie/correspondences-a-call-to-end-direct-provision-in-ireland/. 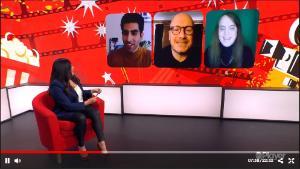 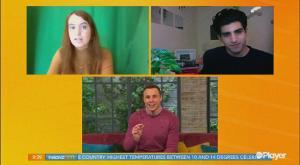 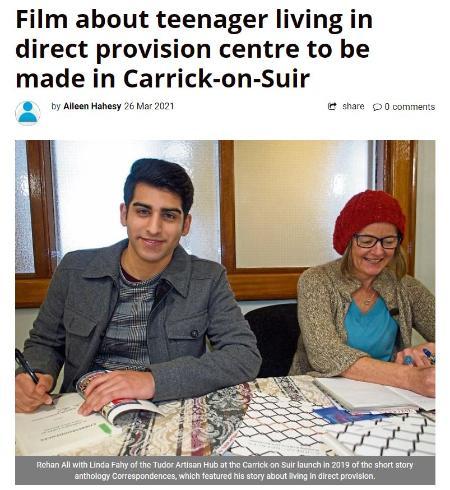