Eight UCC students have been awarded the prestigious title of Puttnam Scholar. The Puttnam Scholarship programme offers UCC students from any discipline the opportunity to work with and learn from digital education pioneer Lord David Puttnam, Oscar-winning producer of films including Chariots of Fire, The Mission, The Killing Fields, and Midnight Express. The scholars come from a diverse range of academic backgrounds including Neuroscience, Youth & Community Work, Medicine, Creative Writing, Digital Humanities and Film & Screen Media. 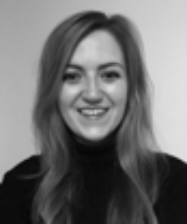 Geraldine Boyle is a Masters student in Film and Screen Media. With a BA in Photography, her work has been exhibited at the Royal Ulster Academy on two separate occasions.  Originally from Belfast, she has spent the last five years working for the BBC in London, specialising as a Drone Operator. She has filmed for series such as Panorama and Gardeners’ World, but hopes to expand her knowledge within the Irish film industry, and become an established filmmaker.

Colette Forde is currently in her final year studying Youth and Community Work and founded Teen Speak to destigmatize therapy and promote help-seeking behaviours in young people. Her debut one-woman show innit, which she also starred in, met with sell-out success in Cork and had a four-week run Off-Broadway, New York, providing a platform to address her audiences fervently about the need for a cultural change in mental health attitudes. Her film, Dovetail, was recently funded by the Screen Skills Ireland and Bow Street Academy's: Actor as Creator grant. She is “beyond thrilled to avail of this incredible opportunity.” 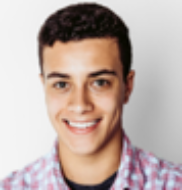 Mahito Indi Henderson is a postgraduate student in the MA in Creative Writing programme at University College Cork and a 2020 GOI-IES awardee. Hailing from Boulder, Colorado, USA, he has received various grants to pursue filmmaking, creative writing, and painting. In 2017 he received a Media Arts Grant to write and direct a short film, Final Sprint, and in 2019 he was awarded a Summer Undergraduate Research Grant for a series of oil paintings, illustrations, and short stories. As a dual citizen of Canada and the United States, he is interested in the intersection of art, culture, and racial identity.

Harry McCann is an award-winning entrepreneur and final year student of the BA in Digital Humanities & Information Technology at UCC. He has also been a significant voice in youth affairs and in the media. He is a regular contributor to several national television and radio shows and an op-ed columnist with the Irish Independent and thejournal.ie. Harry was awarded a Quercus Scholarship for Entrepreneurship and Innovation by UCC. 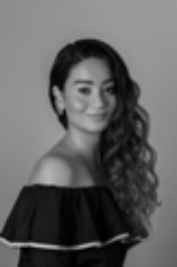 Abnoos Mosleh-Shirazi is a medical student from Canada who has always had a passion for cinema: “I grew up watching the Academy awards ever since I could remember. I would watch all the nominated movies with my family and root for my favourites. I’ve learned a lot about life, emotions, personalities and relationships through cinema. Though I plan to become an anaesthesiologist, I really wanted to pay homage to my passion for movies while I can with this amazing opportunity, the Lord Puttnam Scholarship.”

Máire Murphy is a final year student in the BA Film and Screen Media, with a minor in English. She is hoping to work in the field of representation, creating content in different forms of media. With a background in multi-instrumentalism, activism, seamstress work, performing, debating and writing, she hopes to approach her work with a cross-disciplinary attitude to creativity. 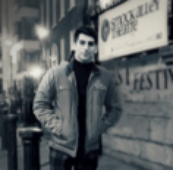 Ramish Qayyum is a final year Neuroscience student. Born in Pakistan, he moved to Ireland when he was seven and now lives in Fermoy, Co. Cork. ”Neuroscience is an exciting and challenging field of study and as passionate as I am about my course I am just as passionate about creative writing and filmmaking and so I have always tried to develop and sustain both my academic and creative interests.”

Célem Roche Deegan is a final year undergraduate student in Film & Screen Media, with a minor degree in Economics, from New Ross, Co. Wexford. ”Growing up, I was very much community-orientated. I played several sports and was an active sea scout for over eleven years. I recently completely a year of study in Leeds Trinity University, where I studied modules in public relations, marketing, tv genre, tv production, radio production and film. I hope to combine my knowledge and deep love for film with many years’ experience of successful team-orientated projects.“ 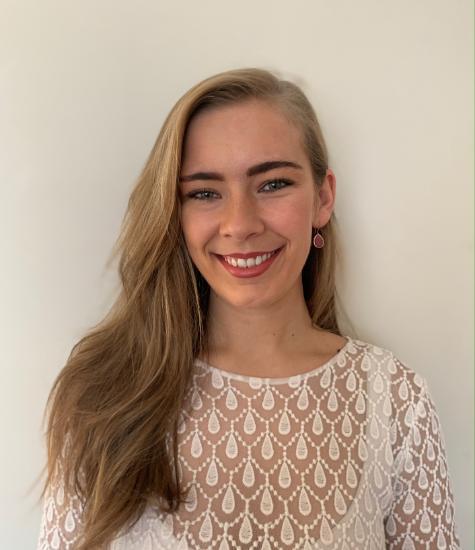 Ellen O’Regan (22) from Cobh in Co. Cork is currently in the final year of a law degree and hopes to become a writer.

Jessica Donohoe (23) from Crosshaven is a final year student in Medicine and Surgery in UCC who has always been passionate about the arts and attended the Montfort College of Performing Arts and Cork School of Music for 10 years to pursue training in dramatic studies.

Marcus Hogan is a Final Year World Languages Student who has a particular interest in East-German perspectives on German reunification and Human Rights Literature in the Chilean and Argentinian context. 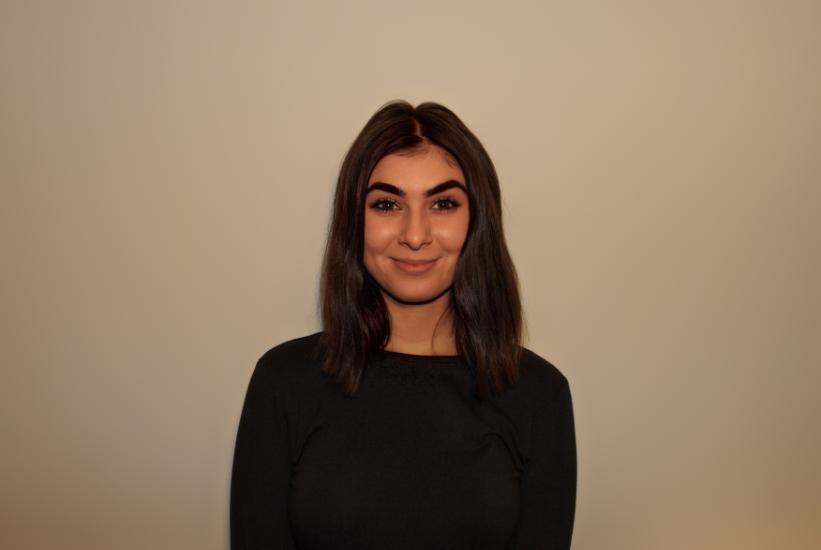 Conach Gibson is a 22 year old Criminology student studying at University College Cork. After being born in the United States and later moving to Ireland, Conach’s lived experiences have shaped her understanding of different societies and historical contexts. She believes that film production is an important aspect of spreading and sharing information to a wider audience, especially those outside of academia. 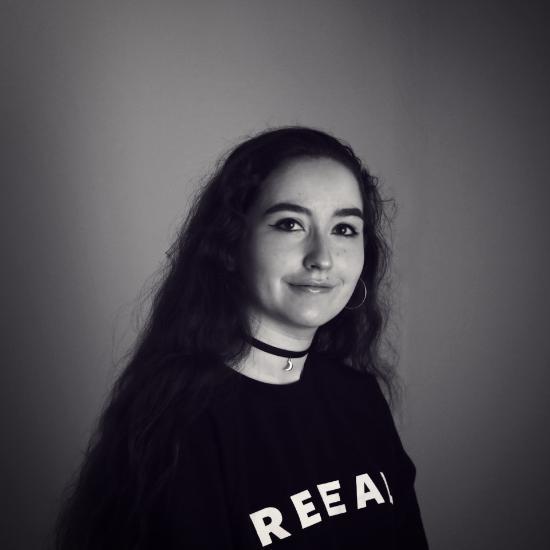 Casey Hynes is a student in the MA in Film and Screen Media in UCC. She is from Mitchelstown, Co. Cork and hopes to pursue a career in the film industry, namely in screenwriting, directing and editing. 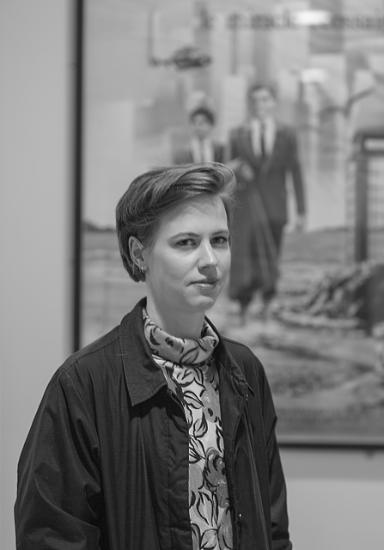 Mary Kelleher is a student in the Masters Program in Planning and Sustainable Development in UCC and is particularly interested in human ecology and environmental psychology. 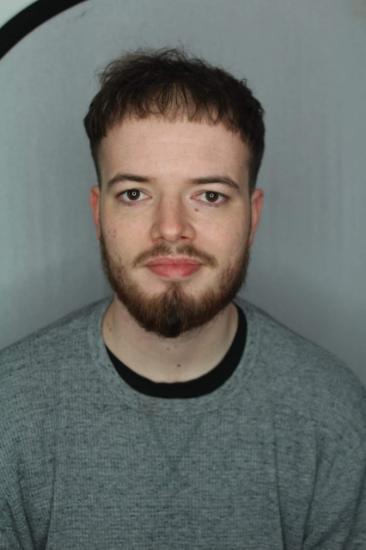 Harry White, is 20 years old and a final year student of the BA in Film and Screen Media at UCC, his debut film The Lion’s Den (2018) was selected to be screened at the Indie Cork Film Festival. 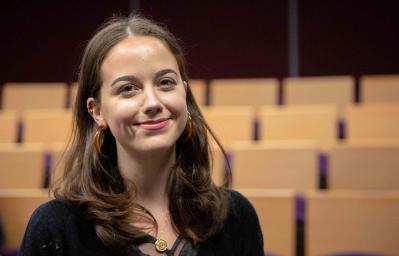 "My name is Eli Dolliver, a final year film student of the BA in Film and Screen Media here in UCC. I live and work in Cork with my sisters and mother, my dog Moose, and my cat Púca. I have a deep and passionate love for film, from independent art house cinema and hard hitting documentaries to sci-fi, horror, and monster movies. I take a minor in English, where my studies in Shakespearean, Victorian, and Anglo-Saxon literature all inform my filmmaking and storytelling practice." 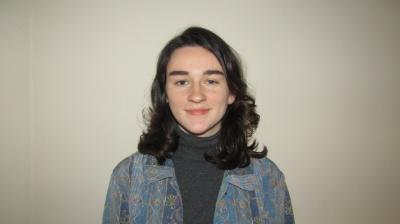 'I am in my Final Year of Bachelor of Arts degree at UCC, doing a Major in English and a minor in the History of Art. I have always possessed a keen interest in both English literature and creative writing. However, it was not until college that this enthusiasm developed to include the visual arts via my History of Art modules, the film modules I selected as part of my English major, and the camera that I was given last Christmas. I am extremely excited to be involved in the Puttnam Scholarship!' 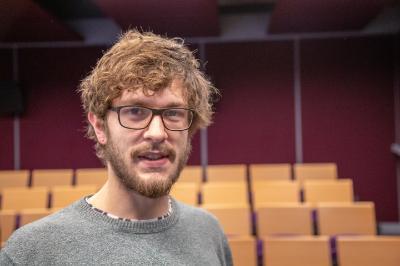 I am a final year civil engineering student from Cork, disciplining in the environmental stream. From a young age I have always invested the majority of my time in all things creative. Classically trained in piano and self-taught in guitar, I began composing music at the age of thirteen, and from here started producing music. I’d consider myself a multi-instrumentalist, playing drums for a band ‘Pretty Happy’ and guitar for another called ‘Selkies’. I am also self-taught in bass guitar and synth, out of necessity to utilize these instruments in my own compositions. I also have a great interest in acting, starring in local bands’ music videos and college student short films.

My acknowledgeable accomplishments to date are all composition and production related, including self-producing an EP (2017) and an album (2018) under my own name, and another short EP under the alias “Glassy Overture” (2018). Under this alias I managed to win the 2018 UCC Singer-songwriter competition. I have also produced two singles with Pretty Happy (2017, 2018) and was the master engineer for Selkies’ debut EP (2018).

After graduating from my Bachelor’s degree, I plan to do a masters in either film scoring or music production, to turn my passion into a career in the Creative Industries.

Oisín O’Driscoll, born and raised in Fermoy, County Cork. Coming from a creative family background of designers and musicians he went on to study Film and Screen Media in UCC and is a recent graduate. During his studies he focused his interests in film and developed skills in screenwriting and directing with the help from the fantastic staff in the Film Department. His films to date have focused on alienation, individual social standing in modern Ireland and gender issues. He is delighted to have gained the opportunity to further his passion for film and ultimately help him reach his screenwriting goals through the awarding of the Puttnam Scholarship.

Ben Whyte O’Callaghan, born and bred In Blackrock, County Cork. Ben comes from a sporting family, with his father representing Cork in Gaelic Football and his mother representing Ireland in athletics. Although Ben did have an interest in sport, his true passion was creativity and story writing. Due to his interest in short story writing from a very early age and being introduced to the world of film through classic westerns from his grandfather, Ben went on to study Film and Screen Media in UCC and is now in his final year.  His main interest is in screenwriting and hopes to continue developing this skill within the industry in the future. After spending a year in Germany and working on several projects there, Ben hopes to move abroad again when he is finished in UCC to experience and work in the film industry in another country once again. Ben was absolutely thrilled to receive the Puttnam scholarship, as he feels it could bring him one step closer to achieving his goal of becoming a screenwriter in the future. He’s extremely honoured and excited to be under the support and guidance of Lord Puttnam over the coming weeks and is greatly looking forward to working with the other scholars.

Liam Levaro Fleming. I’m from all over the shop; I was born in the USA, swiftly moved to Limerick, before moving to Torrevieja, Spain, for a large chunk my childhood, and finally I moved back to Limerick in time for secondary school, and I've yet to adapt to the weather.

I’ve always considered myself a creative but my outlets during secondary school were limited to art class and acting on the weekend. I have also always been into technology, mostly thanks to a bit too much time spent playing computer games, but this interest went equally under-stimulated in school.

I ended up studying digital humanities & I.T. in UCC so that I could nurture these two neglected passions of mine - creativity and technology - which I have come to discover are deeply intertwined with one another.

Most recently I’ve returned from my 3rd year abroad in Nanyang Technological University, Singapore, where I was mostly studying interactive media modules like game design and immersive sound, while also dabbling in animation & film-making.

While I’ve recently been forced to shift focus to the impending doom that is final year I'm still finding solace in creativity through audiovisual class projects, my FYP, and now above all through being a Puttnam scholar.